A Post-casualty Rush to Judgment Can be Costly

It was a warm and sunny early summer morning in an increasingly popular and typically busy domestic harbor. And, not surprisingly, the water and waterfront were crowded with commercial and private vessels of every description. From a slowly moving tug/barge combination, a working dredge and a small tanker delivering fuel on the more industrial side of the harbor, to numerous water taxis, sightseeing boats and larger catamaran ferries, the harbor was buzzing with activity.

All of these commercial vessels were operating in close quarters with a fleet of small yachts, cabin cruisers, sailboats and even a few very brave kayakers who were paddling around the congested waterway competing for the very limited open water and dock space located adjacent to the ferry and water taxi landings.

An Unexpected Casualty
In this frenetic mix of activity, one of the larger ferries was close to completing one of its brief but regularly scheduled runs across the harbor and was approaching its dock to offload almost 100 passengers and pick up a similar number of new passengers for the return leg. The vessel’s approach to the dock was proceeding normally and the veteran captain engaged the engine controls to effect neutral and then reverse to prepare for docking. To his complete surprise, the engines did not immediately respond to his input, causing the vessel to violently allide, bow-first with the dock.

Despite announcements to remain seated until the vessel came to a complete stop, many passengers had already left their seats and had lined up to disembark when the abrupt impact threw many of them against bulkheads and down the stairs on top of one another from the top deck. In a matter of seconds, a tranquil ferry trip on a picture-perfect morning turned into a scene from a disaster movie. The scene was filled with dozens of obvious injuries; bone fractures and lacerations, and an unknown number of less obvious, but no less serious injuries.

The emergency response was both swift and massive by police, fire and EMS first responders. Full media coverage, both professional and social, of the event was broadcast ‘live’ seemingly from the moment of impact. Local television stations hastily dispatched their air and ground news teams to the scene to provide words and pictures for their ‘breaking news’ and regularly scheduled midday newscasts.

An Impulsive Decision
In this chaotic and highly charged atmosphere, a senior member of the ferry’s management team was unexpectedly interviewed at the scene by a reporter. After apologizing profusely for the ‘actions of his captain,’ the manager then announced that the company was immediately terminating the employment of that same veteran ferry captain. Obviously, this decision was made prior to the commencement of any investigation into the actual cause of the allision, and strongly implied that it was due to the negligent acts of its own long-term employee. And, while it was certainly within the scope of a senior company executive to unilaterally make such a personnel decision, the snap judgment to fire its own captain was picked up and immediately broadcast by the local media. Eventually, this would come back to haunt the ferry operator who was perceived as judging its employee guilty until proven innocent.

Prudently, and prior to being unexpectedly terminated, the ferry captain had contacted his license insurer to report the incident and the local maritime attorney assigned to represent him went immediately to the scene to prepare him for the first round of interviews – not with the local press but with investigators from the U.S. Coast Guard.

While on the scene for several hours after the ambulances, helicopters, camera crews and reporters were long gone, it slowly became apparent to the maritime attorney and lingering first responders that the more likely cause of the ferry’s violent allision with the dock was some type of mechanical failure and not the negligent actions or decision-making of the dismissed ferry’s captain. Eyewitnesses on both the ferry and the dock were adamant in claiming that, from their perspectives, the vessel’s engines did not promptly respond to the captain’s pre-docking commands until it was too late to avoid striking the dock.

The Focus of the Investigation Shifts
A few weeks later, the now unemployed bridge officer, accompanied by his attorney, met with the Coast Guard for an expansive casualty investigation interview. By then, he had submitted his 2692 Marine Casualty Report and had been thoroughly prepared by his attorney on what to expect and how best to respond to the questions of the two Coast Guard accident investigators. The interview went well for the captain who handled himself professionally and honestly, and it became increasingly clear that the investigators’ focus had shifted from the captain’s performance that day weeks earlier to the working condition of the vessel’s electronic computer controls on the morning of the casualty.

This was a major sea change in the case because, in large part due to company manager’s statements made to the press at the time of the accident, the ferry operator was facing over two dozen lawsuits demanding several million dollars in total to compensate the most seriously injured passengers involved in the incident. And, because the Coast Guard was very unlikely to file negligence charges and commence Suspension & Revocation proceedings against the captain’s license, his former company and the mechanical condition of its vessel were now in the crosshairs of the plaintiff attorneys representing the injured passengers.

It also went without saying that, in light of his abrupt dismissal, the company’s former captain was not likely to be a strong witness for the company’s defense against the dozens of potentially costly civil suits now threatening his former employer.

While terminating the captain immediately following the casualty can be debated as to its timing and appropriateness, the ‘blame’ that it inferred on him and the damage it caused to his professional reputation turned out to be disproved by the subsequent investigation. In fact, the cause of the allision was ultimately determined to be “the result of mechanical failure.” Consequently, the vessel owner was required by the Coast Guard to conduct sea trials before resumption of service. The company complied and the ferry was eventually placed back in service.

Rash Decisions Can Have Lasting Consequences
What’s the point? As certain areas of the U.S. maritime community continue to grow in terms of both size and number of vessels, and more and more operators in the passenger vessel and brown water sectors are providing license insurance coverage to their licensed officers as an employee benefit to help recruit and retain these valuable employees, it has become increasingly important for management to show patience and restraint before taking any post-accident disciplinary actions against their officers until the emotional, media-driven atmosphere subsides and professional investigators can determine the scientifically valid cause of the casualty. Prematurely (and mistakenly) assigning blame could easily turn out to be a lose/lose outcome – for everyone. 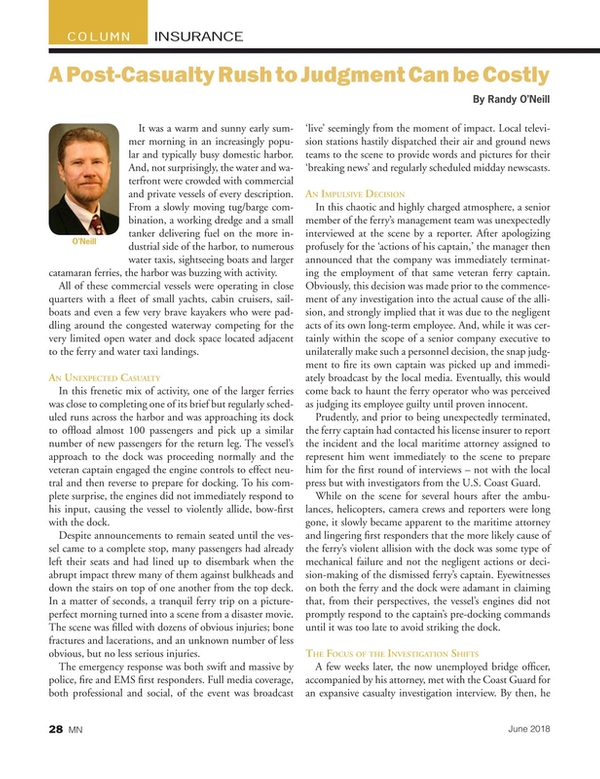 Read A Post-casualty Rush to Judgment Can be Costly in Pdf, Flash or Html5 edition of June 2018 Marine News