Vessel Response Plans: A Primer for the US Waterfront

Congress enacted the Oil Pollution Act of 1990 (OPA 90) a mere 17 months after the disastrous oil spill following the grounding of the tanker Exxon Valdez in Prince William Sound. Among the many provisions in the voluminous bill was a detailed planning requirement. For the first time, tank vessels and facilities handling oil in bulk were required to develop extensive plans for responding to a worst case discharge of oil into waters of the United States. As regards vessels and marine-transportation-related facilities, the U.S. Coast Guard was charged with promulgating the regulations to implement the requirement.

Realizing that there were insufficient response resources available in the United States, the Coast Guard placed caps on the regulatory requirement for vessel response plans (VRPs) upon promulgation in 1993, but clearly stated that those caps would be increased in five year increments, charging the maritime industry with the responsibility to commence the acquisition process sooner rather than later. Those artificial caps have since been phased out.

SMFF
With regard to salvage and marine firefighting (SMFF), the situation was starkly different. Such specialized response resources were sorely lacking in the United States. There were a handful of large marine salvage companies with the capability of handling major marine casualties in offshore waters. These companies were mostly found in major ports, but there were significant gaps in coverage, particularly on the West Coast. Smaller companies were available in most ports, but these could only handle routine incidents in sheltered or near-coastal waters. Marine firefighting was ‘catch as catch can,’ with many tugs having fire monitors onboard and some ports having fireboats.

Faced with that situation but having the statutory requirement to address salvage and marine firefighting in the VRP, the Coast Guard elected to include a vague provision requiring plan holders to plan for such contingencies, but establishing no criteria or targets. It wasn’t until late 2008 that detailed regulations were promulgated requiring tank vessels to submit SMFF plans. This regulation had been preceded by a number of workshops with the marine industry and a proposed rulemaking that received numerous comments.

In 2004 and 2006, Congress amended OPA 90 to include nontank vessels of at least 400 gross tons carrying oil as fuel for main propulsion and operating on the navigable waters of the United States within the requirement to have oil spill response plans. Regulations implementing the requirement were not promulgated until 2013. By that time, most if not all covered nontank vessels had response plans in place because the statutory requirement was self-executing. The regulations merely added a few specifics. The regulations also made it clear that the NTVRPs had to address salvage and marine firefighting.

Issues & Answers
There are two lingering problems with the SMFF program. The first is that, unlike the OSRO program, the Coast Guard elected to not examine the SMFF service providers and determine their capabilities and competencies. Thus, the onus for such verifications resides with the response plan holders. There are thousands of response plan holders and only a few have the capability to make the necessary verifications. The vast majority of plan holders are either unaware of their responsibilities in this regard or are assuming that the SMFF service providers capabilities are consistent with their clearly outstanding reputations. Either way, the uncertainty remains.

The second problem concerns casualties that occur in CONUS nearshore coastal waters (within 12 nm of the boundary lines) far from a port where the SMFF resources are located. The regulations require that on-site fire assessment commence within six hours of the activation of the response plan. If the casualty occurs off, for example, Jacksonville, the time limit is of little consequence because resources are located within the port.  On the other hand, if the casualty occurs off, for example, Fort Pierce, the six hour timeframe is probably unrealistic.

The Coast Guard created this timeframe problem when it promulgated the SMFF regulations and treated the CONUS situation differently than the OCONUS situation. For marine casualties in OCONUS waters, the timeframes relate to casualties occurring within 50 nm of COTP cities. Therefore, the regulatory timeframes for SMFF responses do not apply to marine casualties occurring in nearshore coastal waters off Hilo because Hilo is located more than 50 nm from Honolulu. SMFF responses are still expected to occur as rapidly as possible, but there is no applicable regulatory construct. It would be wholly realistic and logical to apply the OCONUS rule nationwide, because the problem exists not just off Fort Pierce but in numerous other locations where the distance between COTP cities is greater than 100 nm.

Alphabet Soup: VRP, SubM & COI
An unrelated situation is starting to impact the vessel response plan program. Towing vessels are in the process of becoming inspected vessels of the United States. Previously, as uninspected vessels, very few regulations limited their operations. As inspected vessels, though, towboats are being issued Certificates of Inspection (COI), which include routes the vessel is authorized to ply and activities in which the vessel is authorized to engage. Many towboats are identified in vessel response plans as resource providers. The holders of plans that identify towboats as resources must now check to ensure that the towboats identified are actually authorized to provide the identified service in the location provided for in the plan.

Those complications aside though, the marine casualty response situation in U.S. waters generally exceeds that of any other nation worldwide. The U.S. Coast Guard and numerous stakeholders, including owners and operators of tank vessels and nontank vessels, and the oil spill response organizations (OSROs) and salvage and marine firefighting (SMFF) resource providers can be justly proud of their achievements in this respect. 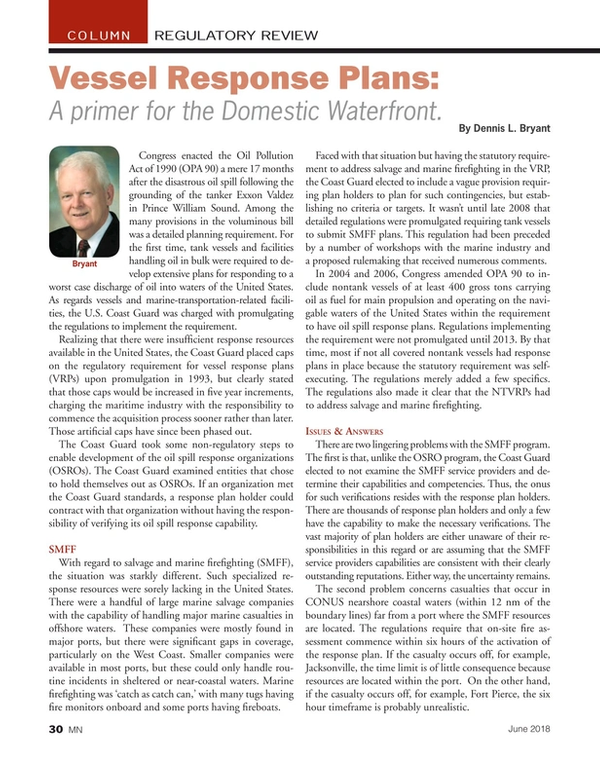 Read Vessel Response Plans: A Primer for the US Waterfront in Pdf, Flash or Html5 edition of June 2018 Marine News