Emerging spill response trends fit into two big categories: technology and a combination of economic and social forces. Both will shape what comes next.

Florida’s stunning Tampa Bay stands out as exactly the kind of place where you have to think about hazardous materials emergencies. It was 25 years ago, on August 10, 1993, that a freighter collided with two barges near the entrance of Tampa Bay, causing a fire and spilling over 32,000 gallons of jet fuel, diesel, and gasoline and about 330,000 gallons of heavy fuel, devastating beaches, wildlife and habitat. Tampa Bay doesn’t want to relive it.

At 400-square miles, Tampa Bay is the largest open-water estuary in Florida. It also boasts more than 80 miles of manmade deepwater shipping channels. The Port of Tampa is also among the nation’s busiest. Every year, more than 4 billion gallons of oil, fertilizer components and other hazardous materials pass through Tampa Bay, all of it transiting the most diverse water bird nesting colonies in North America.

Preparing for and Preventing the Next Big One
The Tampa Bay Estuary Program (TBEP) was established by Congress (in 1991) to assist with Bay protection and improvement efforts. TBEP has a “Comprehensive Conservation and Management Plan” to sustain progress in bay restoration through the year 2027. Spill prevention and response gets major attention, which TBEP divides into two broad parts:

For example, Tampa Bay’s Physical Oceanographic Real-Time System (PORTS) provides information about tides, winds and currents. The Bay is one of a few Coast Guard sites testing virtual, or electronic, navigation aids. On the policy side the Bay has a public-private sector Spill Committee that meets monthly. Readiness includes unannounced drills at industrial facilities. A full-scale test of the Area Contingency Plan is held every four years, at a cost of $100,000.

Tampa Bay is unique, but on the other hand it isn’t. Comprehensive ‘hazmat’ planning occurs everywhere. That’s because, as former U.S. Coast Guard Commandant Jim Loy used to say, “If you’ve seen one port, you’ve seen one port.” Tampa Bay hasn’t had a major spill in 25 years, a record of success largely duplicated across the United States. On the other hand, familiarity breeds contempt in much the same way that complacency tends to distract. In as little as 10 years, autonomous vessels might transit Tampa Bay, or a hundred places in between. Stakeholders find themselves asking, “Does an accident in 1993 properly advise scenario assessments for 2023?”

“For NOAA and a lot of other agencies, especially the Coast Guard, there surely is a balance between how much you do for preparedness versus response,” commented Doug Helton, NOAA Emergency Response Division Regional Operations Supervisor for the West Coast, Alaska, Hawaii, Great Lakes Region. Helton was on site for the 1993 Tampa Bay spill, hired by NOAA one year before to develop the Agency’s Rapid Assessment Program (RAP) for oil and chemical spills. “The US is in a pretty good spot,” Helton said, “because we have the big trust fund set up after Exxon-Valdez that pays for initial response actions. Those financial changes that happened as a result of the Oil Pollution Act have really been beneficial.”

Closer to home, at least for Tampa Bay, Timyn Rice is State Scientific Support Coordinator-Pollution Response for the Florida Fish and Wildlife Conservation Commission. He works closely with the Bay’s Spill Prevention Committee. Florida stays ready, Rice said. It has to, because while there have been no major spills in 25 years, as many as 850 smaller (25 to 5,000 gallons) spills are reported here annually.

Still, change is constant and there are trends that spill prevention and response experts are watching, trends making new demands on planning and accident response capabilities. For example, today’s oil markets allow for the export of domestic crude oil. Hence, loaded tankers now move both ways through harbors. That’s good for commerce. But, are spill plans and resources keeping up?

Emerging Trends
Emerging spill response trends can fit into two big categories: (1) technology and (2) a combination of economic and social forces. In Tampa, first responders now arrive with real-time information regarding spill size, material characteristics and spill direction. Apps – and applications – change, adding strength to this field. Then there are other technologies, presenting a more complex mix of moving parts, big moving parts – such as autonomous vessels.

Boston-based Sea-Machines (S-M) builds and installs a range of marine technology, including emerging technology for piloting unmanned vessels. Hazardous environments – oil spills and clean up – is a major focus area. S-M’s automated systems are today mostly in a test-case mode with selective companies. S-M’s SEA MACHINES 300 System will likely be ready in the 3rd quarter of this year. To that end, Sea Machines recently partnered for tests with Marine Spill Response Corporation (MSRC).

Testing centered on the ability to autonomously control a Munson boat to deploy and tow a spill collection boom working in tandem with, and controlled by, a 210-foot MSRC oil spill response vessel.

For his part, John Swift, MSRC Vice President, said, “This technology has promise. Anything you can do to maximize safety and minimize fatigue of personnel is always a good thing.”

James Cowles is ASV’s Commercial Technical Sales Manager. Cowles said ASV is working on a “follow me” system, towing a boom, for example, with the effort under the control of a larger, manned vessel. This has obvious advantages – it keeps personnel out of harm’s way. A related project with an Israeli-based Harbo, involves a lightweight and flexible boom system. One goal is to pack 500 meters of material into an autonomous boat, ready for instant deployment. “This would mean you could get something in place very quickly,” Cowles said, “at least containing the spill and holding it until a clean-up team could arrive.”

These ideas are not yet commercially ready. R&D is still underway.

Another emerging autonomous technology is Short-Range Unmanned Aircraft Systems (SR-UAS). R.E. “Bob” McFarland is Incident Management & Preparedness Advisor with the U.S. Coast Guard District 13, based in Seattle. McFarland called SR-UAS “one of the most significant new and emerging technologies available,” supporting the Guard’s strategic commitment to invest in new technologies. Better yet, Coast Guard units will be able to contract for UAS services as needed from commercial vendors, avoiding capital investments. In other words, costly equipment won’t have to just sit around.

Other emerging technologies are not quite so mechanically linked. In March 2016, the Coast Guard identified non-floating oil as a risk and implemented a voluntary Oil Spill Response Organization (OSRO) classification guideline addressing detection, recovery and storage capabilities of non-floating oils. Ceren Karaer, MSRC’s Business Development Manager told MarineNews that MSRC is working on a range of topics, from improved sorbents to remote sensing to “herders” that can move petroleum molecules towards each other enabling more effective mechanical recovery or in-situ burning.

Beyond Technology
Tech-based developments don’t stand alone or provide the panacea for all problems. For example, two emerging issues have spill response managers concerned. First, experienced personnel are leaving the field and recruitment is difficult. Secondly, spill prevention presents a downside: businesses can’t stay in a field if there’s no work.

The Spill Control Association of America (SCAA) keeps a close eye on these developments. Devon Grennan is SCAA’s president as well as CEO and President of Seattle-based Global Diving & Salvage. “We have tenured professionals exiting the industry faster than the next generation can gain experience,” Grennan said. Because of that, SCAA has a Future Environmental Leaders committee focusing on recruitment.

Grennan further notes that “as incident frequency has dropped to historic levels, many owner operated companies have transitioned to additional services.” This presents consequences: potentially less response capacity nationally just when alternative modes of energy transport, and related activities, are expanding – barges, trucks, rail, pipeline, vessels and the transfers among that carriage. In other words, increased risk and increased pressures on talent and resources.

Both SCAA and MSRC are watching revenue issues closely. MSRC notes that decreased spills mean “lower revenue for OSROs (oil spill response organizations) because, in addition to retainers, we rely on spill response revenues. Maintaining a robust (response) capability is not inexpensive.” SCAA’s Grennan notes that while the Oil Spill Liability Trust Fund was recently renewed, the funding formula might be something to revisit, to align more closely with the changing dynamics of oil markets and transport.

Another emerging topic is that of liability. “Responder immunity remains a cornerstone issue for SCAA,” writes Grennan. Big issues hang over this field as a result of lawsuits filed against first responders after Deepwater Horizon. Left unresolved, the threat of lawsuits could present even more barriers for entry into this important business. Nevertheless, some relief was obtained from the 2016 U.S. District Court ruling that dismissed claims for damages against emergency responders. For SCAA, this issue needs closure and they have drafted language that would statutorily expand liability protections. Implementing this language is part of SCAA’s ongoing political advocacy work.

Collectively, that’s a lot to think about. 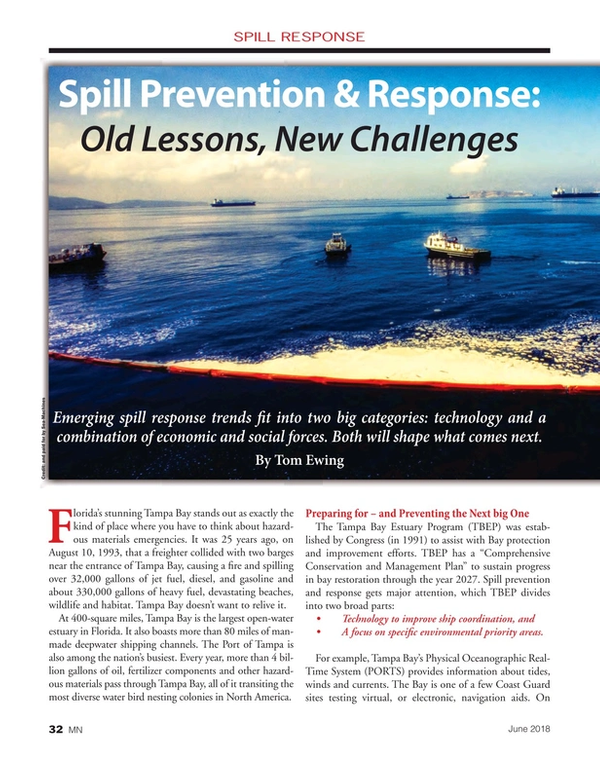