The Coronavirus Aid, Relief and Economic Security (CARES) Act enacted in March 2020, provided relief to numerous industries impacted by the COVID-19 pandemic. Air carriers, for example, benefitted from the creation of a $25 billion Treasury direct loan program, in addition to a $25 billion worker support program that provides a mix of grants and loans to cover employee wages, salaries and benefits. In addition, Congress waived the small business affiliation rules for businesses in the accommodation and food service industries to increase the availability of Paycheck Protection Program loans to such businesses. The CARES Act also provided supplemental appropriations to support other existing programs, including $9.5 billion to assist agricultural producers, $300 million to support fishermen, and $150 million to support arts organizations, museums and libraries. However, the maritime industry – including the offshore sector – was noticeably absent from the free flow of federal funding in the CARES Act or the subsequent Paycheck Protection Program and Health Care Enhancement Act.

On July 9, 2020, Chairman of the House Committee on Transportation and Infrastructure Peter DeFazio (D-Ore.) and Chairman of the House Subcommittee on Coast Guard and Maritime Transportation Sean Patrick Maloney (D-N.Y.) sought to correct Congress’ error through the introduction of the Maritime Transportation System Emergency Relief Act (MTSERA). In introducing the legislation, Chairman DeFazio properly noted, “The men and women who work within the Maritime Transportation System are part of our Nation’s essential workforce that has been key to keeping critical goods moving during the global pandemic, and for that, we owe them a debt of gratitude.” He added that the legislation sought to “give the maritime sector the same protections and relief given to other industries during COVID-19, and will close a huge gap in current federal emergency assistance that has left links in the maritime supply chain isolated and unable to access other assistance programs available to other industries.”

MTSERA, if enacted, would create a new program by which the Maritime Administration (MARAD) could issue grants to State entities or U.S. companies engaged in “vessel construction, transportation by water, or support activities for transportation by water.” The grant funding could be used for the costs of capital projects to protect, repair, reconstruct, or replace equipment and facilities of the U.S. maritime transportation system that MARAD determines is in danger of suffering serious damage, or has suffered serious damage, as a result of an emergency. In addition, the funding could be used to cover one year (with the opportunity for an additional year) of operating costs of U.S. maritime companies affected by an emergency, including costs related to emergency response, cleaning, sanitization, janitorial services, staffing, workforce retention, paid leave, protective health equipment and debt service payments.

Immediately following its introduction, MTSERA was added to the House version of the National Defense Authorization Act for Fiscal Year 2021 (NDAA), which was passed by the House on July 21, 2020. The Senate version of the NDAA, passed by the Senate on July 23, 2020, did not contain a similar provision. The House and the Senate will conference later this year to resolve differences between the two versions of the NDAA, and maritime stakeholders will need to keep a close eye as to whether MTSERA survives the conference and ultimately ends up on the President’s desk as part of the NDAA.

Relatedly, the House and Senate Appropriations Committees have begun discussions regarding a potential Continuing Resolution to temporarily fund the federal government at the beginning of FY 2021 in October. MTSERA, even if ultimately passed as part of the NDAA, is merely an authorization that will require Congress to provide separate funding. It will be interesting to see whether funding for MTSERA – or a similar COVID-19 maritime relief program – enters into the Continuing Resolution discussion. Notably, the six-bill appropriations “minibus” passed by the House on July 31, 2020, contained significant maritime support program funding, including $314 million for the Maritime Security Program, $10 million for the Cable Security Fleet (created under last year’s NDAA), $389 million for the National Security Multi-Mission Vessel Program, and $300 million for Port Infrastructure Development grants. Congress is clearly willing to fund maritime support programs, it is simply a matter of whether they are willing to extend that funding to all parts of the industry impacted by the COVID-19 pandemic, including the offshore sector.

The state of offshore lifting operations
In addition to MTSERA, the House-passed NDAA included the Elijah E. Cummings Coast Guard Authorization Act of 2020, which would reauthorize the U.S. Coast Guard and Federal Maritime Commission. According to Chairman DeFazio, the bill would “strengthen the Coast Guard by enhancing navigation and maritime safety, increasing funding to address a $1.8 billion backlog in shore infrastructure and deferred maintenance, authorizing new family leave and child care policies and increasing gender and racial diversity in the Coast Guard Academy and within the ranks.”

Noticeably absent from the bill, however, was a provision regarding offshore “installation vessels” that was included in last year’s Coast Guard Authorization Act, which was passed by the House but was never acted upon by the Senate. In essence, the provision would have permitted the use of foreign heavy lift vessels for the installation of platform jackets only if the Secretary of Transportation determined that there were no qualified U.S.-flag vessels available. The provision was supported by the Offshore Marine Service Association but was strongly opposed by certain offshore oil, gas and wind stakeholders.

The absence of the installation vessel provision potentially clears the path for increased foreign heavy lift operations in the U.S. offshore market. This sentiment is further reinforced by U.S. Customs and Border Protection’s (CBP) November 2019 (effective February 2020) decision to revoke long-standing interpretative rulings that prohibited any movement of a foreign vessel with merchandise aboard during lifting operations in U.S. waters. Under the revised interpretation, CBP permits foreign heavy lift vessels to engage in lifting operations that include certain lateral movements when the movement is necessary for the safety of surface and subsea infrastructure or the vessels and mariners involved. Undoubtedly the political and legal fight over offshore installation vessels will continue and it will be important for U.S. offshore operators to monitor which way the Congressional winds blow. 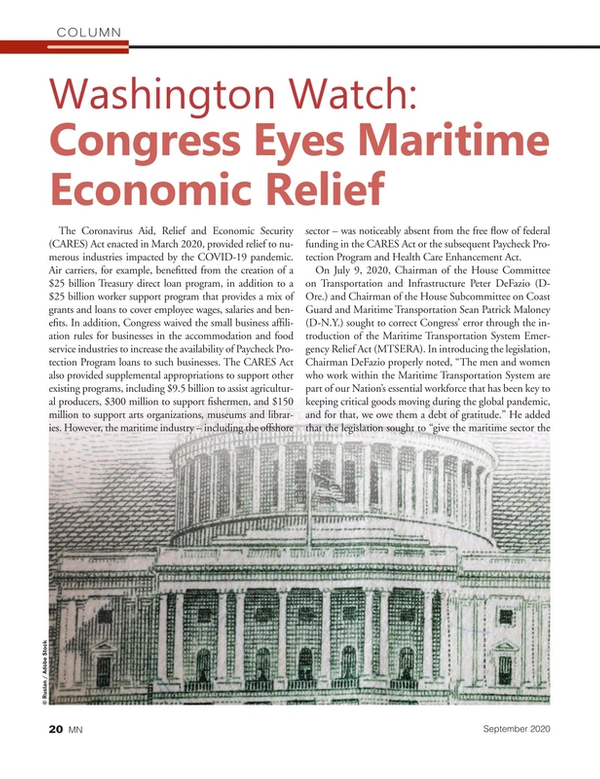