Europe has been the clear leader in offshore wind power since the world’s first offshore wind farm was built off the coast of Denmark in 1991. Now, as regions in Asia and North America set out to harness the huge energy potential gusting off their shores, local firms are drawing from the expertise laid out in the well-established European industry as they build the foundations for new offshore wind markets of their own.

It’s no surprise, then, that designs for offshore wind support vessels currently being built in the U.S. come from the other side of the Atlantic. One of these is the Chartwell 24 crew transfer vessel (CTV), from U.K.-based Chartwell Marine, currently under construction for Atlantic Wind Transfers at Blount Boats in Warren, R.I.

Introduced in 2018, the Chartwell 24 is gaining popularity, with a number of references from European firms such as Seacat Services and High Speed Transfers.

The connection between Chartwell Marnie and AWT extends beyond the most recent vessel order. Chartwell Marine’s managing director, Andy Page, was previously head designer at South Boats, the company that delivered the design for AWT’s (and the United States’) first CTV, Atlantic Pioneer. The 21-meter vessel was also built by Blount Boats, and delivered to AWT in 2016, originally under contract with Deepwater Wind to service the country’s first offshore windfarm off the coast of Block Island, R.I. The all-aluminum catamaran is currently under long-term contract with Ørsted, who has taken over ownership of the Block Island Wind Farm. 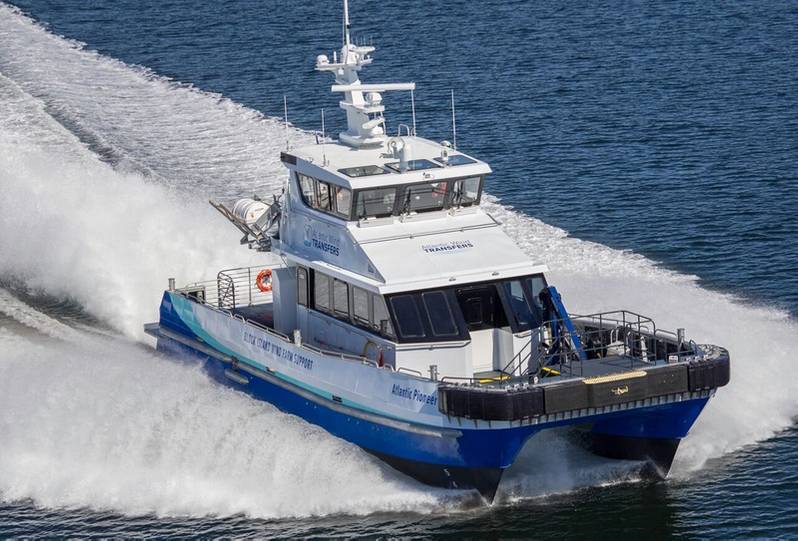 After three years operating the U.S.’ first purpose built offshore wind service vessel, AWT turned to Page and members of the Chartwell team behind the Atlantic Pioneer to design for the firm’s next two CTVs, the first of which, Atlantic Endeavor, is scheduled to go straight to work for Dominion Energy upon delivery later this year.

AWT’s new vessels will be a specialized version of the Chartwell 24, adapted to the unique operational conditions and environmental regulations of the U.S.

Page notes several key differences between CTVs built for U.S. and European waters. For one, the underwater profile of the U.S. version has been modified to operate safely in wavelengths and swells along the U.S. Eastern Seaboard that are typically longer and larger than what’s seen in the North Sea. From a compliance perspective, the designer also considered emissions standards variances as well as U.S. legislation protecting the migration route of the protected right whales. 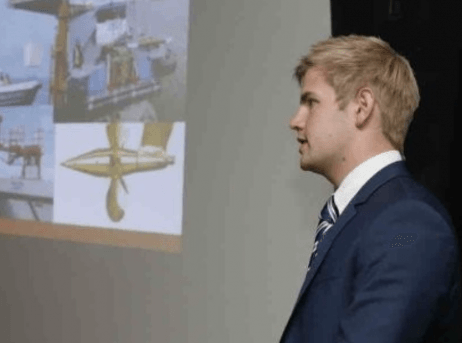 “I think our Chartwell 24 will be one of the main markers and will form the backbone of a lot of operations in the United States.”  – Andy Page, Managing Director of Chartwell Marine (Photo: Chartwell Marine)

The Chartwell 24 is designed to be adhere to both IMO Tier III and EPA Tier 4 emissions requirements. “EPA Tier 4 requirements in the U.S. mean that any engine greater that 800 horsepower (hp) requires a scrubbing system (selective catalytic reduction, or SCR, system) that reduces nitric oxide (NOx) and sulfur oxide (SOx) emissions as the engine burns fuel,” Page says. “In Europe, we currently follow IMO Tier II which is roughly equivalent to EPA Tier 3. However, from January 1, 2021, IMO Tier III, which has emissions reduction requirements that are equivalent or slightly higher than EPA Tier 4, comes into play.”

In the U.S., EPA Tier 4 allows for as many less-than-800 hp engines as desired without after treatment, so a quad arrangement with two 799 hp engines per hull has become popular, Page says. In Europe, IMO Tier III applies to all combustion engines greater than 130 kilowatts (approximately 174 hp), meaning the quad arrangement won’t be possible from January 2021 without SCR. “We were very mindful of that when we developed the Chartwell 24 in the first place,” Page says. “We wanted to make sure the boat was ready for that arrangement, and it was also ready for IMO Tier III and EPA Tier 4 SCR units.”

In the U.S., all vessels 65 feet (19.8 meters) or longer must travel at 10 knots or less in certain locations along the U.S. East Coast at certain times of the year to reduce the threat of vessel collisions with endangered North Atlantic right whales. Page says the Chartwell 24 is available in a right whale compliant version that’s just under 65 feet long, as well as a full-length version in excess of 80 feet (24.4 meters). AWT’s first of two new CTVs currently under construction will be the smaller version.

“When we developed our Chartwell 24 design, we wanted to make sure that from a buildability and an operator’s fleet perspective that the ingredients—be it the engines, fuel system, seats and wheelhouse—were identical regardless of whether you went for the 65-foot right whale compliant vessel or the full size,” Page adds. “This means that if you’re trying to build a fleet of CTVs, as an operator you can have commonality of parts, your ergonomic and aesthetic image is the same, the controls are in the same place, the heads are in the same place, etc.” 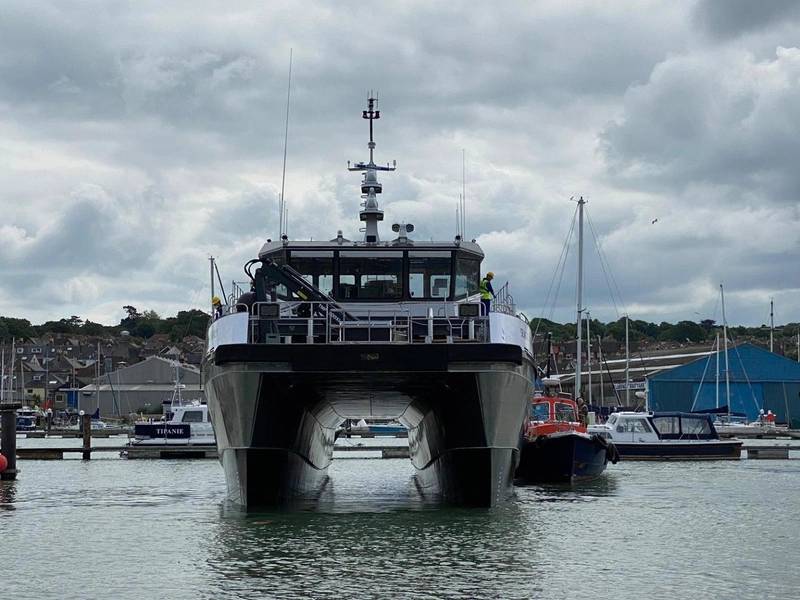 Interestingly, Page says many of the learnings gained from designing vessels for U.S. requirements have been helpful in European waters, demonstrating that the flow of expertise travels both ways.

“We’ve taken in mind some of the U.S. Coast Guard requirements—some of which are perhaps better developed than European standards—and use them to help influence our designs over here. And equally, in some areas the European standards are slightly higher,” Page says. “It’s been really good for research and development, and this has helped us to innovate what we believe is a good all-around solution.”

In addition, Chartwell has benefited from taking its designs, including the Chartwell 24 and the new 30-meter CTV design developed with BAR Technologies, to ABS for approval in principle. And, having now built several boats in the U.S., Chartwell has been able to leverage the unique experience and skills of American boatbuilders to improve its European designs. 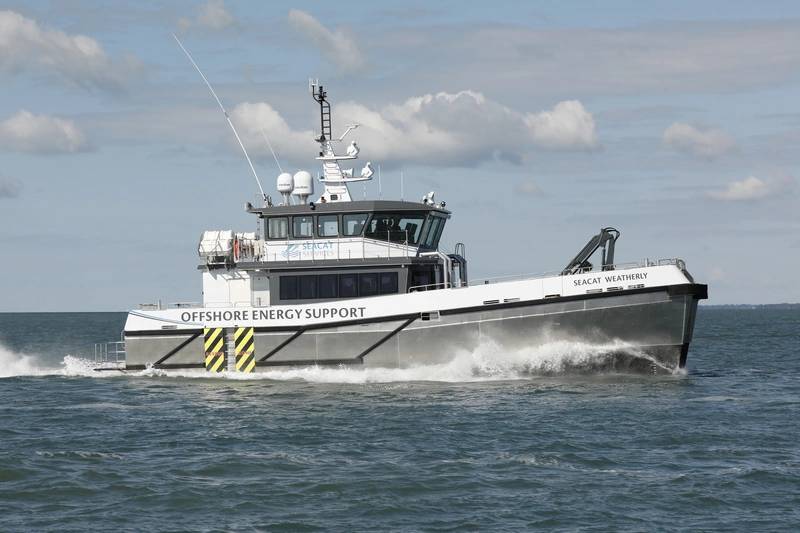 Impactful technological advances are taking place on both continents, and Page says the amount of innovation happening in the industry makes today a good time to be a naval architect. Two key CTV design trends he identified are helping to continue the industry’s journey toward decarbonization while also offering efficiency gains and operational advantages.

The first is the use of battery or alternative fuel cells for all or some power for propulsion and house loads, which Page says is steering the way his firm designs boats. Diverse Marine in the U.K. is currently building a Chartwell-designed hybrid diesel/electric CTV for High Speed Transfers. A fairly sizable diesel engine, 400 kilowatts of electric power and two large lithium ion battery banks will enable the vessel to operate electrically, on diesel or both. “From a capex perspective, there is a current slight premium, but it’s not where it was five years ago. But in terms of opex, your engine hours and service time will reduce significantly,” Page says. In addition, reduced fuel use and the ability to optimize vessel operations with multiple power options—either through machine learning or manually—will create further cost savings, he adds.

The other key trend Page highlights is the use of underwater appendages to increase lift and reduce drag. Chartwell has partnered with U.K.-based BAR Technologies to use foils to reduce vessel displacement, lifting the vessel out of the water to minimize vessel surface area. “Less resistance means less power required to operate the vessel at speed,” Page says. “A combination of these two will provide the best possible vessel solution at the moment.” 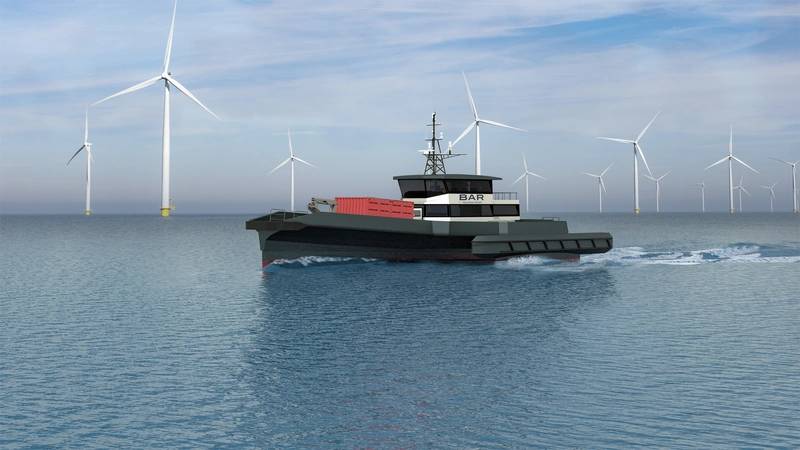 BAR Technologies and Chartwell Marine have received approval in principle from ABS for the design and construction of a BAR 30-meter CTV aimed for operations in the growing U.S. offshore wind sector. (Image: Chartwell Marine)

Page believes the U.S. holds many opportunities for his naval architecture firm, which in addition to the CTV pair under construction at Blount Boats, currently has a commercial fishing boat, several survey vessels and noncommercial high-latitude exploration yachts in build stateside. In the years to come, Chartwell Marine’s opportunities should only grow alongside demand for a fleet of Jones Act CTVs to service the wave of new wind farms expected to be developed in U.S. waters.

“I think our Chartwell 24 will be one of the main markers and will form the backbone of a lot of operations in the United States. There will also be a requirement to go further offshore and stay offshore longer, and therefore in deeper swells, so I think there is a requirement for larger platforms—be it 30 or 50 meters—both as crew transfer style and accommodation vessels,” Page says. “But I’m also mindful that the cost of construction is higher in the States than it is in Europe, and it’s significantly higher than Asia. So, it may be required that service operation vessels (SOV) will be needed in some areas, but also where they’re capex prohibitive there will be opportunities for CTVs like our BAR 50-meter vessel, a fast light craft using further hull form technology to make it comfortable at zero speed for seakeeping.”

“The demand, we assume, will follow similar traits to what it has in Europe and what it’s growing to be in Asia, and there will be plenty of boats to go around in various yards in the U.S.,” Page says. “It takes a lot of investment, both time and money, but I think the long-term requirement—and let’s not forget the wind availability in the States—will mean that it will come to fruition.” 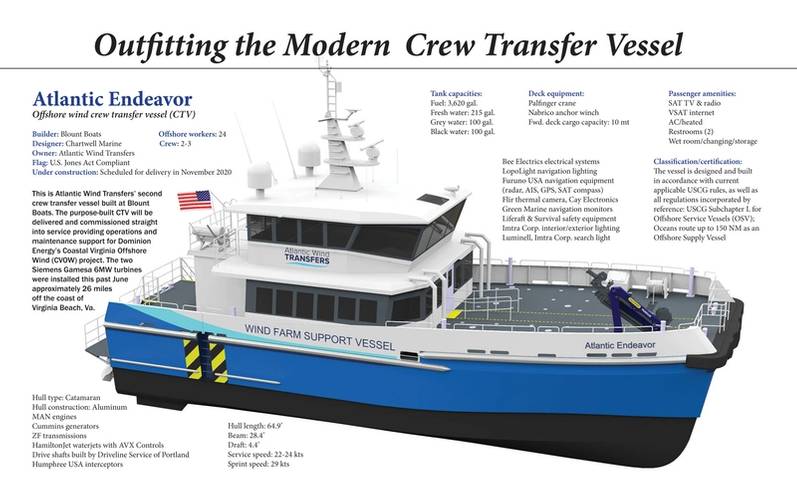 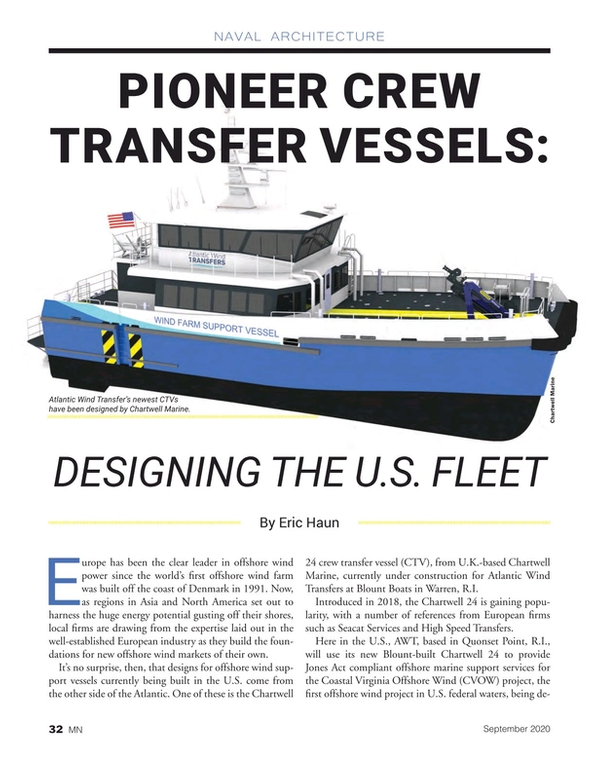