For more than 35 years, Advanced Subsea (AS) has been deeply involved in marine technological innovation. Through steady research and partnerships with research institutes in France and Brazil, Advanced Subsea has been developing new tools, procedures and methods for monitoring oceanographic and meteorological parameters. AS is an independent French company specialized in deep water subsea construction support and services with its head office in Paris and support offices in Houston, Luanda and Rio Janeiro. Advanced Subsea’s Modeling & Forecast Services are based on a partnership between Advanced Subsea SAS & LEGOS – CNRS Laboratory for Geophysics & Spatial Oceanography.
One of the most important aspects of AS’s work in Brazil is related to Met-ocean studies which include Operational Oceanography, Ocean modeling & forecast, along with Oil Spill Studies.

According to Jacques Schoellkopf, AS’s Director in Brazil, Advanced Subsea also offers Met-ocean services such as engineering, development, mobilization, servicing of Met-ocean systems, wave/currents coastal HF radar, telemetry systems, data buoys and current meters along with operational deployment and servicing of Met-ocean data acquisition systems. Met-ocean data analysis & reporting, data validation and pre-processing, Met-ocean reporting, standard statistical study and engineering statistical studies.
In the deepwater segment of oil and gas E&P, AS has been active in deepwater Met-ocean modeling and forecast, sea state analysis, currents numerical modeling, analysis and forecast of daily operational conditions, and the oil spill drift modeling. Advanced Subsea’s Met-ocean services were used to monitor the Frade oil spill in the Campos Basin in 2011.
Advanced Subsea is conducting consulting and research work for Brazil’s national operator on Petrobras’s PRESAL36 project, which is a high resolution 3D ocean current model, zoomed in on the pre-salt area.
AS also developed eddies tracking techniques, which can be used either in PRESAL36 outputs or surface currents derived from satellite imagery observation and analysis for any place in the world, said Schoellkopf. The eddies evolution mapping made around the Frade oil field during the November 2011 oil spill was calculated using Lyapunov FSLE technique. This service is available for any place off the Brazilian coast, on a daily basis.
Other Met-ocean services offered by Advanced Subsea include the development of Met-ocean data analysis and reporting, software packages and data validation, pre-processing modules, standard statistical study packages and engineering statistical study packages.
Some of the recent Met-ocean services rendered by Advanced Subsea include the development and servicing of a Met-ocean data acquisition and processing system for ELF (2 years), the development and servicing of a Met-ocean data acquisition and processing system for CEA (3 years), a large deepwater current measurement campaign (2 years) for Phillips Petroleum and a five semi-submersible Met-ocean buoy study for Petrobras in partnership with IPT.
With the great demand for specialized deepwater equipment and services, for deployment at the new pre-salt plays and other post-salt deepwater plays along Brazil’s coast, from Petrobras and other super-major O&G operators in Brazil, Advanced Subsea has been busy running its Met-ocean services and some of its other services such as field development survey and acoustic rig positioning, AUV/ ROV pipeline inspection & survey construction support and tie-in metrology.
At this point there are very few completely national companies that have the capacity to offer such specialized deepwater E&P support services and basically there are no 100% national companies with the capacity to manufacture deepwater support equipment including AUVs & ROVs and other Met-ocean acquisition systems.
That may be changing, as up-and-coming local companies specialized in subsea technology services and equipment manufacture join the market. But for the foreseeable future, the majority of specialized deepwater equipment and services will be provided by foreign companies, through its Brazilian subsidiaries.
Because of Brazil’s local content laws, foreign companies wanting to enter the O&G equipment and services sector are encouraged to open a local subsidiary and hire local manpower in order to participate in Petrobras tenders.

Some international deepwater companies have been here for many years, including familiar names such as FMC, Aker and Subsea 7. Many more are recent arrivals, international companies exploring opportunities to set up shop in Brazil, such as ECA Hyatec, which through its Brazilian subsidiary ECA Latin America Ltda. offers a range of AUVs, ROVs and other equipment to O&G operators and Navies in Brazil and all of Latin America. New arrival Advanced Subsea do Brasil, born from a French parent, has opened its own local subsidiary in downtown Rio de Janeiro and has been involved it deepwater survey and construction support in Brazil.
According to Schoellkopf, a partnership between Advanced Subsea do Brasil and ECA (a French company specialized in ROVs and AUVs) has been formed to conduct work in deepwater pre-salt areas in the Santos Basin, primarily using the Alistar 3000 AUV from ECA for data acquisition. The AUVs are used either in autonomous mode or in remote mode using a 3km fiber optic umbilical. The scope of AUV applications are construction support for field installation with pre-lay survey, touch-down point monitoring and as-laid/as-built survey at the development stage and IMR activities such as pipeline inspection, FPSO riser & mooring inspection at the exploitation stage. Advanced Subsea and ECA launched a Joint Innovation Project based on Alistar 3000 for sharing AUV experience between major Brazilian market operators.
Advanced Subsea has completed a Survey Construction Support Services Contract with REPSOL offshore from Spain for the development of the Montanazo & Lubina deepwater field. The scope of work was to perform pre-engineering survey, pre-lay survey, coring & seabed sampling, then trenching depth monitoring and finally as-trenched/ As-built Survey and Reports.
According to Schoellkopf, the Pre-salt ROM is important as a way of forecasting the complex deepwater currents that occur along the pre-salt. These currents can be strong and unpredictable, endangering the expensive drilling equipment. In addition, it is important to better understand the speed and nature of the currents in the event of an oil spill, to expedite clean-up and recovery efforts.
Advanced Subsea do Brasil is currently offering consulting & services in the following areas: Rig Positioning; Survey Construction Support; Metrology; LBL array design; Intervention & Inspection AUV Services; and Operational Oceanography - Numerical Ocean Models.
In 2013, Advanced Subsea will raise capital via an IPO to boost development of its deepwater activities, particularly its positioning & survey services, operational and IMR services in Brazil, West Africa and the Gulf of Mexico.  In order to increase efficiency in their subsea operations, one of Advanced Subsea’s partners, Marseille-based Cybernetix, is also developing a hybrid AUV/ROV aiming at providing full IMR services (Inspection Maintenance and Repair) on the basis of the very innovative solution, Swimmer AUV/ROV designed to provide deepwater inspection and intervention services. The Swimmer AUV transports a specially adapted Work class ROV to the deepwater location and connects itself to a special subsea power hub that is energized from a surface vessel such as an FPSO, even a large multipurpose vessel can be its support vessel as the electronic connection to the subsea power hub is done through a power and control umbilical. Once hooked up the ROV can be deployed to do its own work controlled from the surface vessel, between ROV interventions, the host AUV can conduct its inspections and sensory monitoring of offshore structures, such as flowlines, riser and pipelines. An operational Swimmer system will make it possible for onsight field development engineers to easily plan future ROV operations interventions and avoid the costs of a permanently stationed support vessel and heavy deepwater ROV umbilicals. The Swimmer is a resident subsea system capable of staying up to three months submerged, even in deep waters.
It is also important to note that not only subsea service providers but also more and more foreign subsea equipment manufacturers also appear to be negotiating partnership with Brazilian companies or even opening their own subsidiary company in Brazil, as the supply logistics from vital subsea equipment is one of the main concerns regarding equipment supply for the pre-salt.


(As published in the January/February 2013 edition of Marine Technologies - www.seadiscovery.com) 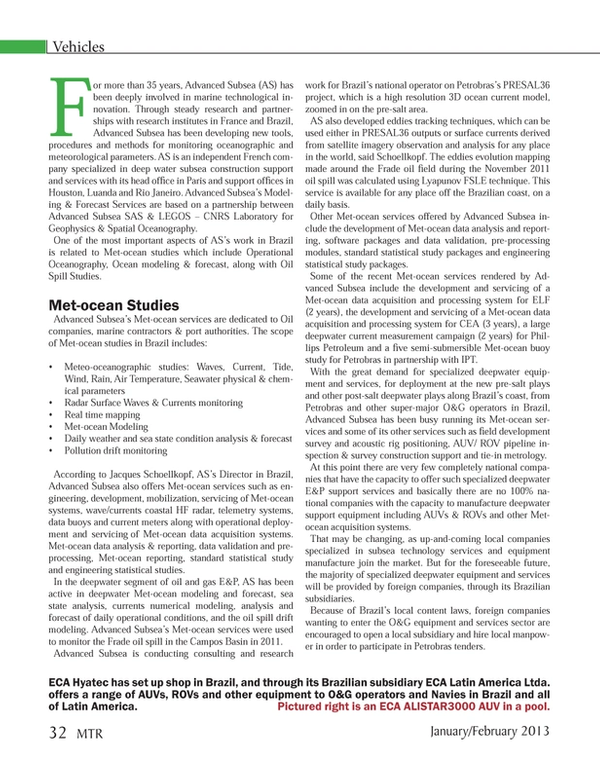