Fugro Survey Limited carries out offshore subsea survey projects in the North West European Continental Shelf, Mediterranean, and West Africa regions. It is part of the geotechnical and geophysical services group Fugro and, more specifically, part of its Survey Division. The Aberdeen, UK, based subsidiary sails a fleet of five hydrographic and geophysical survey vessels, as well as autonomous underwater vehicles (AUV) that are designed to provide precision seabed and sub-seabed data collection abilities down to 3000 m.
The Fugro name is ubiquitous in offshore and subsea circles, gratis of its experience on some of the largest and most technically challenging jobs. An example of this is the Rosebank development operated by Chevron North Sea and its co-venturers Statoil UK, OMV and DONG E&P.
Fugro Survey were contracted by Chevron to undertake geophysical, geotechnical, and environmental surveys in blocks 205/1, 213/26, and 213/27 that lay west of the Shetland Islands and for a gas export pipeline route to shore. Fugro used two of its dedicated survey vessels, Geo Prospector and Fugro Galaxy, to conduct the surveys. The specialist AUV Echo Surveyor 4 was used to collect engineering grade of geophysical data in water depths of over 1200 m; it was reportedly the first time an AUV has been used in a major UK deepwater project. According to the company, the AUV tile camera was proven effective for collecting images suitable for environmental habitat assessments, and has already been used in the largest deep water development projects in West Africa, Brazil, and the Mediterranean.
“We have two main types of business,” said Eric Robertson, Commercial Manager, Fugro Survey. “The first is geophysical and environmental surveys, such as Rosebank, which are vessel-based. The second is specialist survey positioning and construction support services both within the Fugro group and to third party construction companies or operators. This type of activity is extremely complex. We must offer real accuracy and reliability to succeed but with Fugro Starfix we can offer high precision differential GPS for decimetric accuracy and highly specialist acoustic underwater positioning and advanced software solutions.”
Together this means, for example, the company may have five of its own vessels working on projects but its personnel and equipment could also be working on more than 40 additional rigs, barges, and ships at the same time.

Investing in Technology
“In terms of business philosophy, we see investment as being the engine of growth,” said Robertson. “Investment not just in technology but also in people, training and systems. As an example of that we would point out to the many vessels in the site surveying sector which are typically between 25 and 40 years old. Fugro Searcher, commissioned March 2010, was the first new build dedicated site survey vessels in the North Sea in 30 years.”
MV Fugro Searcher was the first example of Fugro’s global series of dedicated hydrographic and geophysical site survey vessels. FSSV 65 is the design name for a 213 ft. (65-m) double-hull survey vessel designed and built to Fugro Survey specifications by German shipyard Fr. Fassmer GMBH. A 12-month process of computer modeling and tank testing was required to achieve optimum hull form and performance output. The FSSV 65 design has proved to be a capable and successful survey platform. The efficient diesel electric drive and specially designed hull ensures quiet operational acoustics that significantly improves the quality of data that can be collected. Desiring an advanced fleet, Fugro installed DP functionality and cutting edge survey equipment including the latest Kongsberg multibeam and sub-bottom profilers and solid digital streamers. It is also a spacious design with en suite accommodation for 42 people and supplemented by modern crew leisure facilities including a video room, gym, and internet café expected from today’s generation of surveyors and engineers. The ships have already tackled analogue geophysical surveys in shallow and deepwater, multi-channel seismic rig site surveys, environmental and geotechnical investigations, pipeline and cable route investigations, and swathe bathymetry projects.
The second in the series, Fugro Galaxy, was delivered in March 2011 and included a 7-ton side and extended 20 ton rear hydraulic A frames for enhanced shallow geotechnical operations. Meanwhile, Fugro’s global build program has now moved to other parts of the world with the production of three new vessels; MV Fugro Equator delivered in July 2012 and being operated from Fugro’s Singapore office; MV Brasilis due for delivery at year end to Fugro in Rio de Janeiro; and Fugro Australis for Fugro in Perth, Australia. Investment continues with the recent purchase of a second AUV for Fugro Aberdeen. The 3000m depth rated Kongsberg manufactured Hugin 1000 AUV, named Echo Surveyor 6, will be delivered in April 2013. Echo Surveyor 6 will offer additional capacity for deepwater projects in Europe and West Africa region and compliments Fugro’s two Hugin 1000’s in Asia-Pacific and two Bluefin 21 and one Hugin 3000 in the Americas regions.

Investing in People
Apart from its cutting edge technology, Fugro Survey Limited has also become known for its high personnel standards and innovative approach to HSE. “Investment into personnel training, development and management systems is very important,” said Robertson. “For example, health and safety has been a continuous focus for the last 15 years and we’ve just been awarded the Order of Distinction at a gala ceremony in September 2012 by the Royal Society for the Prevention of Accidents (ROSPA). This is the highest merit of continuous HSE performance excellence as it is only awarded after 15 consecutive gold awards are achieved. In addition to the Order of Distinction we have also been presented four President’s Award. “Our HSE is employee-driven so that it is the personnel that have the power to stop unsafe acts from occurring. It is all about employee empowerment. One example is our new campaign iPower, which began July 2012 and will run until February 2013, and focuses on five key areas where safety can be improved: planning and awareness; transportation and driving; plant and equipment; workplace behaviour; and high-risk activities. We also bring our field staff together annually in a brainstorming forum to produce new ideas such as the simple booklet of key offshore risks that we produced a few years ago. The idea was taken up by the Fugro group and has now been distributed to all 13,500 employees in the Fugro group in multiple languages.”
It has now been more than six years since Fugro Survey Limited has been split from Fugro Subsea Services, and in that time the company’s revenue have doubled. Looking ahead, Fugro Survey Limited and the wider Fugro group count on the Fugro Academy, a training center set up in 2006 to provide new recruits with basic training and company familiarization before their six-months of technical courses in their area of expertise, as a chief conduit to its inevitable future growth. Nearly 400 people join Fugro yearly and, rather than poaching them from competitors, the company is keen to bring more people into the industry and the academy is the gateway for many into professional geophysical, surveying or engineering careers.
“About 10 percent of our business is renewables today but we will see how that develops,” said Robertson. “Most of our work is on the construction support side and with UK Round 3 projects starting in 2015, there are potentially huge projects we hope to be part of. Within oil and gas there remains a steady flow of prospects and new developments along the Atlantic margin and Norway that we expect will increase. Fields such as Rosebank and Laggan-Tormore are the new frontier for the UK oil and gas industry. Other markets now coming to our attention include the Norwegian Barents Sea and east to Russia, and west to Greenland. Meanwhile, Fugro continues to focus on the deepwater development of West Africa and the Mediterranean as part of its long-term strategy.”
www.fugrosurvey.co.uk 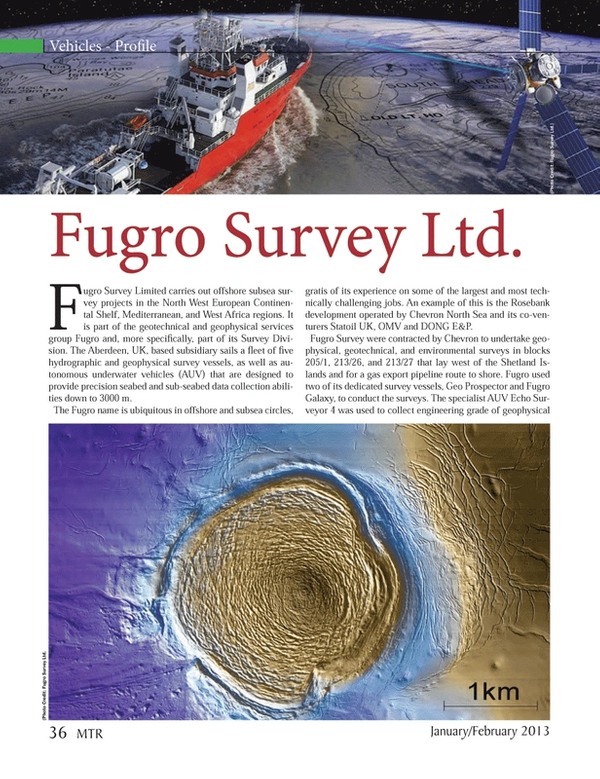