Plastics in the Ocean

Aboard the SSV Robert C. Seamans last November, 1,500 miles from land, 38 researchers from Sea Education Association (SEA) studied a Brobdingnagian swath of Pacific Ocean that has become the temporary resting spot for thousands of tons of plastic. Commonly called the “Great Pacific Garbage Patch,” the area has attracted significant media attention in the last decade but a surprising dearth of scientific attention. Contrary to popular opinion, the “Patch” is not a continuous field of debris, is not visible from space, nor is it an “island of trash.”  But it’s there. Every year almost 300 million tons of plastic are produced but it is estimated that only a tenth of it is recycled. Much of this plastic finds its way into coastal waters before it is swept out to the open ocean by surface currents. These regions, known as gyres, are some of the most remote areas of the ocean.

There are five subtropical gyres - one located in every ocean - and each contains huge quantities of millimeter-sized pieces of plastic. From the deck of the ship on a calm day with no swell, this plastic debris look like confetti. But when the winds pick up, these plastics become almost invisible to the naked eye.
“If you are not specifically looking for plastic with a net or doing visual surveys,” says Emelia DeForce, Chief Scientist with SEA aboard the Seamans, “chances are that you will not see the plastic because it is so small in size.”
Which means that researchers studying plastic pollution need more than mere pool nets to get an accurate measurement of just how much plastic is in the ocean. To solve the problem of plastics in our ocean, or even just to study it, oceanographic technology needs to be conscious of the emerging science.

Surface Nets
The first studies of plastic pollution began in the early 1970s when researchers with Woods Hole Oceanographic Institution (WHOI) threw a rectangular net into the coastal waters of New England to collect organisms residing in the surface waters of the ocean, called the neuston layer.
The net they used was one that had been developed less than 10 years before by oceanographers frustrated by previous nets that were towed from a vessel’s stern. This rectangular net, aptly called a “neuston net,” was released adjacent to the vessel and was supported by a boom that could be lowered and raised. The advantage of it being deployed adjacent to the ship minimized any interference bow waves might have on the organisms it was sampling.
Along with different organisms, the team found two types of polystyrene spherules. These spherules, still used today, become Styrofoam when mixed with a foaming agent. Even in the 1970s, the implications of plastic debris were recorded in the scientific literature. Of the 14 species of fish recovered in the nets, eight were found with plastics in their stomachs. The scientists also determined that the spherules had absorbed polychlorinated bisphenyls (PCBs) from the sea water. Researchers today worry that if fish consume these spherules, which commonly resemble fish eggs, that PCBs and other persistant organic pollutants (POPs) will bioaccumulate and magnify up the food chain, eventually impacting humans.
Researchers from SEA implemented the neuston net into their research program in the mid 1980s. Since then they have collected more than 100,000 pieces of plastic and currently possess the largest data set on plastic pollution in the Atlantic Ocean. In 2001, they began the task of quantifying plastic pollution in the Pacific Ocean.
But one issue that has consistently plagued the neuston net was in its design. Scientists have observed that in “swelly” conditions, the neuston net tends to bounce from wave to wave.
To get accurate measurements of what exists on the surface of the ocean, scientists must know how long the net was in the water. For example, if the net was deployed for half an hour and was being dragged at a speed of 2 knots, researchers can assume that the net was in the water for one nautical mile. However if the net bounces out of the water between waves, researchers have no idea how much area the net covered.
In 1981 a new surface sampling net entered the oceanographic scene. The manta net attempted to fix some of the design errors of the neuston net by attaching a large wing to the top of it, making the net look similar to that of the manta ray. Along with the wing, the net also includes a counter-balancing weight, sinking the net and preventing it from bouncing from swell to swell.
“The manta net has been the standard for many years,” said Kara Lavender Law, research professor with SEA. “SEA has continued to use the neuston net for a couple of reasons, namely for consistency with our historical archive, and the ease with which it can be deployed, recovered and processed.”
“Both nets tow at the surface of the ocean,” said DeForce. “The neuston net is easier to deploy because it does not require a hydrowinch and it takes up less space on the ship.”
Researchers with the Algalita Foundation and 5gyres, organizations also focused on the issue of plastic pollution, have begun modifying the manta net so that it can be used on a variety of vessels, even vessels not typically associated with oceanographic research. By changing the size of the manta net and adding detachable wings, they have recently created the “Suitcase Manta Trawl”. Another variant, the “Hi-Speed Trawl”, has a considerably smaller net opening that allows a vessel to tow the net at higher speeds.

Below the Surface
“On a cruise in 2009 in the North Pacific,” said Giora Proskurowski, a Principal Investigator with SEA, “there was this period where the wind died down. I noticed on the surface of the ocean way more white flecks. It was calm and the lack of turbulence allowed each piece of plastic to rise to the surface.” In windy weather, scientists have discovered that plastic tends to get mixed into the water column. This means that the amount of plastic that has been sampled is significantly lower than what actually exists.
“I went back through every tow we had data on and looked at the average wind speed during a tow and compared it to the number of pieces of plastic for every tow in the Pacific and Atlantic subtropical gyres and it was a pretty obvious connection that at high wind speed you had low plastic,” said Proskurowski.
To sample plastics at depth, scientists with SEA used a Tucker trawl during their Plastics expedition in 2010. Like with the manta and neuston nets, the Tucker trawl was initially designed to study plankton. The net is designed to open at a discrete depth, such as five meters, and once triggered by a messenger, close at that same depth.
But in 2012, SEA received a slightly modified MOCNESS (Multiple Opening/Closing Net and Environmental Sensing System) to study plastics in the water column with more precision.
“The Tucker trawl is strictly mechanical: there are no electrical components,” said Erich Horgan of Biological Environmental Sampling Systems, Inc., the company that designed the modified MOCNESS for SEA. “People can put on free standing modules that might be able to measure temperature, salinity, depth but the MOCNESS was the system that allowed a user to see ‘what was going on at depth’ and be able to influence the depth at which to trip the nets.”
Horgan says also that the MOCNESS has a vast range of applications. Aside from conductivity, temperature and depth, the MOCNESS can include devices to measure salinity, chlorophyll, dissolved oxygen and light level. They have also created other modified MOCNESS nets to study predator/prey interactions at depths up to 6,000 meters.
During the 2012 expedition, SEA researchers studying plastic in the Pacific Ocean found concentrations of plastic down to 10 meters below the surface. Concentrations, they found, were consistently lowest at greater depth and highest one meter below the surface.

Clean Up
Media sensation over the issue of plastic debris has spawned an overwhelming question. How do we clean up the mess we have created? Where do we start?
Larger pieces, such as derelict fishing nets, have successfully been picked up by NOAA’s Marine Debris program. In July 2012, they successfully removed 50 tons of debris from coral reefs around the Northwest Hawaiian Islands, considered to be one of the most remote regions of the world. To survey large areas of the ocean, a pilot project was launched in 2008 that used unmanned aircraft systems.
Smaller pieces however, like the ones predominantly collected by researchers with SEA last November, remain another challenge.
“One of the difficulties of picking up ocean trash on the surface is the size,” said Rachael Miller, founder of Rozalia Project. “It is often very small and surrounded by organic matter.”
“Rozalia Project is working on methods to pick up floating marine debris, whatever the material, in a way that reduces bycatch and can be scaled for deployment off of fishing fleets and other vessels who transit both in and out of harbors and across long distances. In addition we are learning everything we can about floating marine debris, especially in urban waters, so we can work on solutions: prevention and education programs that stop the problem at the source.” 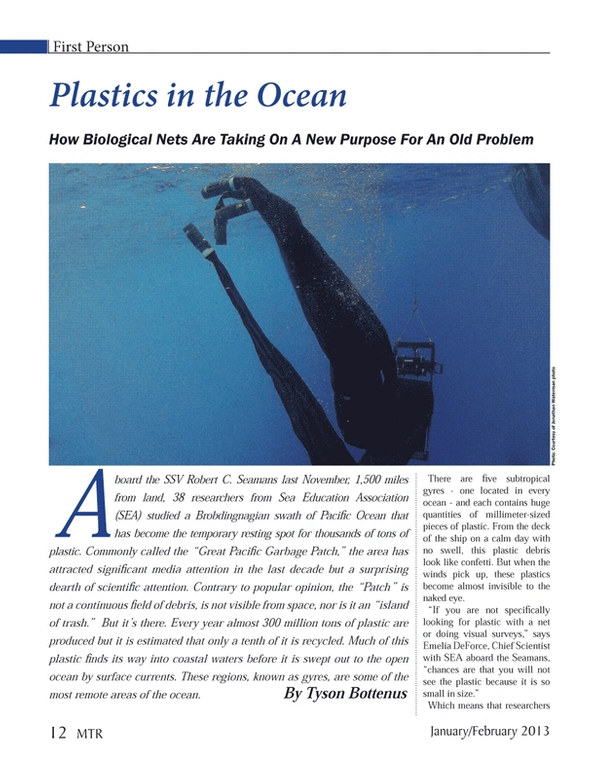 Read Plastics in the Ocean in Pdf, Flash or Html5 edition of January 2013 Marine Technology