OceanGate discovered a World War II-era Grumman F6F Hellcat plane off the coast of Miami Beach. The plane was found during one of an ongoing series of dives in which OceanGate has been using its Teledyne BlueView high-frequency sonar and high-definition photo and video equipment to gather data pertaining to the artificial reefs in Miami-Dade County waters. Recognizing the potential historical and military significance of the find, OceanGate contacted officials at both the Smithsonian Institution and the U.S. Navy, who identified the wreck as a Grumman F6F Hellcat fighter aircraft.  “The discovery of this artifact is significant because it helps us reflect on and learn more about our country’s heritage, but also because it highlights the key role that direct observation plays in undersea exploration,” said Stockton Rush, co-founder and CEO of OceanGate. “Our sonar technology and ability to observe the undersea environment first-hand ultimately led to the discovery of this plane.”

Using a Manned Submersible
OceanGate’s deep-sea manned submersible solutions are a platform for direct underwater exploration, and are quipped with high frequency 2D and 3D sonar equipment, as well as a multitude of data collection capabilities. OceanGate’s Antipodes submersible, which enabled the discovery, allows a team of up to five people to collaborate at depth and gather underwater imagery.
“We were thrilled to be a part of this expedition,” said explorer Chris Welsh, co-founder of Virgin Oceanic, who was part of the crew on the first dive. “Nothing translates to others the excitement of a find like the direct viewing of a wreck first-hand, which shows the value manned submersibles can bring to many research communities.”
Findings from initial surface-sonar side scans, provided by NOAA, displayed a 33-m (100-ft.) long target, which led the OceanGate team to assume it was a sunken vessel. However, during the initial dive to the site on June 29, 2012, the sonar technology on OceanGate’s Antipodes submersible produced what is reportedly the first-ever, close-range, underwater scans of the 28-ft. long, Grumman F6F Hellcat, at a depth of more than 240 ft.
Since the first dive, the OceanGate team has returned for additional observation and data collection on eight missions including a recent long-duration dive of eight hours.
OceanGate will donate its collection of photographs, videos, and technical scans of the Hellcat to the Naval History & Heritage Command in Washington, D.C. The files will be used in the preservation of this federally protected site and in possible future research on the plane.
“Sunken U.S. Navy ships and aircraft are protected from unauthorized disturbance under the Sunken Military Craft Act,” said Dr. Robert Neyland, head of the Naval History & Heritage Command’s Underwater Archaeology Branch. “It is important to preserve and document Navy and Marine Corps wreck sites as an outstanding part of our nation’s heritage.”

The Hellcat
During World War II, the Grumman Hellcat was flown by both the U.S. Navy and Marine Corps and was a mainstay of the air war in the Pacific. The state of Florida was an active training center for military fighter pilots during World War II, and records from the Naval History & Heritage Command indicate that 79 Hellcats were lost off of Florida’s Atlantic coast between 1943 and 1952, with only eight of these losses occurring after 1945. Not all of these losses involved fatalities, as the Command has documentation of many successful water landings and bailouts.
“In the course of its production run, 12,275 Hellcats were delivered to the Navy,” said Bob Rasmussen, director of the National Naval Aviation Museum in Pensacola, Florida. “During peak production one each hour, 24 hours per day, rolled off the Grumman line.  Of these only a handful exist today and the discovery of one more, even under 240 feet of Atlantic Ocean, is important to Naval Aviation History.” 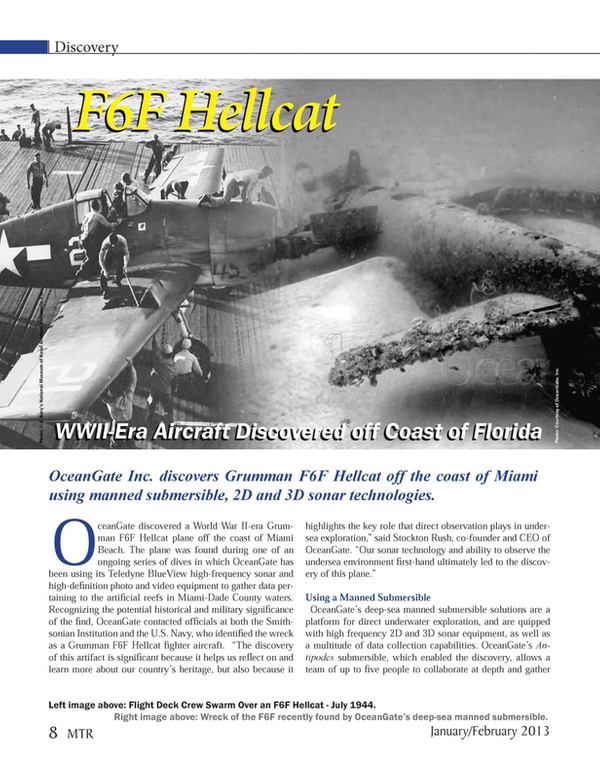