Prometheus Inc., incorporated in 1983, is a mathematics and engineering research firm that specializes in the application of high-level mathematics to modeling, simulation and signal processing. Last month MTR caught up with Dr. Jennifer Brower to discuss the company's position in the marketplace and outlook for 2014 and beyond.

Please discuss your background, how you came to your current field, including details on your tenure and role @ Prometheus.

I have been a Prometheus Principal Scientist and Administrator for 18 years. While at Prometheus I have developed technology applications for Prometheus algorithms, co-developed a DCAA approved accounting system and managed several Prometheus efforts in mathematics and business development, including current efforts to integrate the Materials Identification Reflectivity Kernel algorithm suite into the ANN/BQQ-10 sonar system.
In addition, as Executive Vice President of the International Neuroscience Network Foundation (INNF), I managed a large four-year multinational neuroscience project for Nestle examining the relationships among taste psychophysics, metabonomics and genetics.  I also led INNF’s education outreach program, working to stimulate STEM (science, technology, engineering and math) interest and excellence in K-12 students.
While at RAND, I was Co-Director of the Congressionally-mandated Advisory Panel to Assess Domestic Response to Terrorism Involving Weapons of Mass Destruction (the Gilmore Commission).  As part of this well-regarded multi-year project, I supervised more than 50 personnel and developed and oversaw the research agenda for the panel, which included research on technologies to combat (biological, chemical, infrastructure) terrorism as well as policies and procedures in the areas of critical infrastructure, border protection, and health and emergency services.
I completed a National Research Council postdoctoral fellowship at the Naval Research Laboratory in Washington, D.C., and I hold a Ph.D. in Environmental Engineering and Microbiology from Harvard University, and two Bachelor degrees in Engineering from Dartmouth College and the Thayer School of Engineering at Dartmouth College. I have co-authored several peer-reviewed articles, fsbook chapters and books.

Looking at Prometheus’ turnover in a given year, please give an overview description of your client base.

Prometheus’ client base is primarily the Department of Defense and defense contractors. Currently, our primary customer is the U.S. Navy and more specifically the Naval Sea Systems Command and the Office of Naval Research. Our projects are moving from more basic research support from DoD to transition and integration support from DoD and the commercial sectors. In addition to the aforementioned the following organizations have been our clients:  Space and Naval Warfare Systems Command, San Diego; Defense Advanced Research Projects Agency; the U.S. Air Force including Brooks AFB / Citybase, U.S. Air Force Office of Scientific Research, Mathematics and Information Sciences and the U.S. Air Force Research Laboratory, Sensors Directorate, Rome, New York; the U.S. Army including the Space and Missile Defense Technical Center, Huntsville and the DASD Munitions and Chemical Matters, OUSD AT&L. We have partnered with Raytheon, BBN Inc., Cisco Systems and Newport News Shipbuilding to bring technology solutions to the DoD.

Looking at the military / defense applications: what are the overriding drivers for your business in this market today?

The overriding drivers for our technology are the ability to do intensive computation onboard defense systems due to leaps in computing power and the need for technology solutions that will significantly increase performance of existing systems while reducing costs.

Specifically, can you share with MTR readers a specific, recent project where your specialized applications were applied to significantly enhance production, reduce costs, or both?

Prometheus is currently working to integrate its algorithm suite MIRK into the AN/BQQ-10 sonar.  It is anticipated to significantly reduce false alarms and work in real time based on results with at sea data, saving the Navy both time and money. This algorithm suite was first developed for radar, and there have been and will be future cost efficiencies because the algorithm has been and can be adapted to multiple active sonar and radar systems.

In analyzing the subsea market, what do you count as the biggest technological leaps that have most affected our ability to collect, disseminate and analyze data from the oceans?

Similar to the third question, increases in computing power allow MIRK and other Prometheus algorithms to work in real time, in a single pass on board a variety of Navy and other defense systems.  The creation of numerous platforms including UUVs and AUVs that will benefit significantly from the integration of Prometheus algorithms also allows increased data collection and analysis of results.

The premise of your firm sounds fairly straightforward: to use software solutions in lieu of more timely and costly hardware switches. Give perspective, if you will, on how prevalent this concept is today in the subsea industry.

The concept is prevalent due to technology advances and budget constraints, but the integration of truly autonomous, real-time, single pass software is rare.

What do you consider the greatest challenges to making it more commonplace?

One great challenge is connecting small business technology/software developers with DoD and prime contractors.  It is difficult, particularly for businesses new to defense contracting, to understand the specific needs and systems.  The contracting process itself also stands in the way to innovative software integration.
What initiatives specifically do you as a company engage to help spread your solutions?

Military spending has increasingly come under tight constraints. How has this impacted your business (ie. have you seen an uptick in  attracting business by showing how various tasks can be accomplished more cost effectively?

This allows us to sell our message more effectively -  to improve our customers’ system performance by the formulation, design and integration of accurate and computationally efficient algorithms.

What do you consider the biggest challenge to running your business, efficiently and effectively, today?

The tremendous burden of contracting and other regulations on small businesses.  Each person who works for Prometheus must be able to do a little bit of everything, as opposed to larger companies who have departments to deal with contracting, security, etc.

Prometheus Inc., incorporated in 1983, is a mathematics and engineering research firm that specializes in the application of high-level mathematics to modeling, simulation and signal processing. Its objective is to improve its customers’ system performance by the formulation, design and integration of accurate and computationally efficient algorithms. Developers of radar, sonar and oceanographic systems which require management and analysis of large amounts of data are our principal customers. In most cases it eliminates the need for changes in hardware. Its goal: Provide mathematical solutions and real-time code to improve system performance at reduced costs.
Prometheus has provided computationally efficient mathematical solutions for: remote material discrimination with radar and sonar; feature-based pattern recognition; real time broadband reverberation modeling; closely spaced object discrimination; waveform diversity, particularly for space-based radar and the Advanced Acquisition Decision Aid to evaluate technology investments. Supported by the U.S. Navy, Air Force and National Reconnaissance Office ,Prometheus developed algorithms leading to the automatic determination and discrimination, in intense clutter, of organic materials including foliage, people, chemicals and biologicals at various temperatures and moisture content, as well as man-made objects such as submarines and mines. Its algorithms compute materials identification in real time from scattered measurements, have good noise rejection and are robust to clutter. Its success in providing the Fleet with information not available in today’s operational sonar systems is exemplified by the FY12 award of a $3 million Rapid Innovation Fund contract by the Navy, which funded only 34 of the several thousand proposals received. 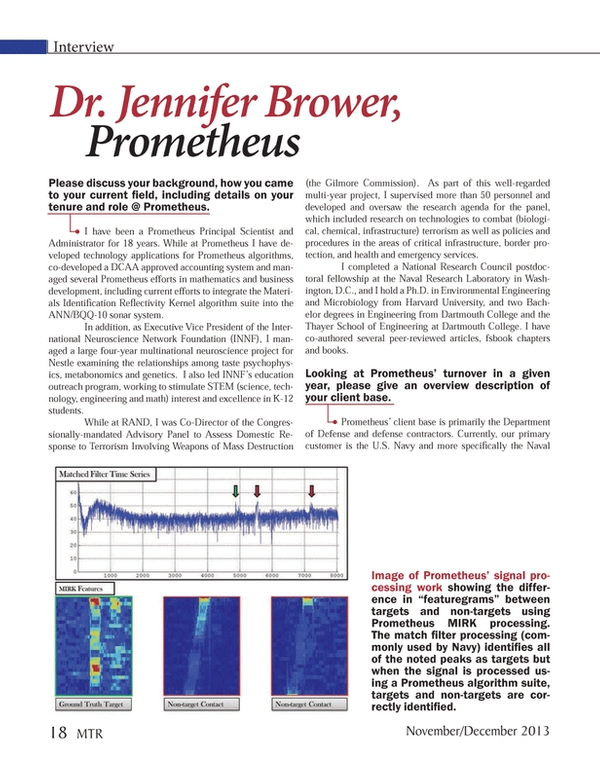