Brazil’s Petrobras has been one of the leading players in deepwater, subsea development projects since the turn of the century.  These projects include pre-salt and post-salt plays, which require extensive and complex subsea engineering and construction efforts. It would be impossible for Petrobras to develop all of its projects alone, therefore much is done by specialized companies, mostly of foreign origin. “We could not have advanced in this project (pre-salt) conventionally, developing the production individually. We needed a global vision of the projects, starting from a high level plan,” said José Formigli, Petrobras’ Executive Director of E&P, speaking of the primary plan for the development of the pre-salt at the Santos Basin, the Plansal, which was created in 2008. According to Formigli, “The Plansal led to a ‘virtuous cycle,’ which has guaranteed better results each year.”
In the last 10 years Petrobras investment in R&D grew 22.7% per year, reaching $1.1 billion in 2012. Petrobras rarely operates alone when it comes to subsea engineering and construction. Partnerships are part of Petrobras’ DNA and by working in cooperation with institutions such as the ANP (National Petroleum Regulator), universities such as the Federal University of Rio de Janeiro (UFRJ) and service companies like FMC Technologies, Subsea 7 and DeepOcean, Petrobras has found solutions to many problems and challenges in subsea development that might have taken much longer to realize if the company were to go at it alone.

Some of the problems and challenges are directly related to the harsh environment where the constructions are undertaken, specific challenges are strong deepwater currents, irregular and unstable seafloor, along with equipment corrosion and equipment failure during and after installation, to name just a few. “It is important to have access to reserves, technology and the adequate mechanisms to manage production to be competitive,” said José Miranda Formigli, Petrobras’ E&P Director during the recent Offshore Technology Conference (OTC Brazil 2013) in Rio de Janeiro.
“In terms of wells and subsea, we have problems associated with hydrate formation and, in some cases, we have also to make work-over on the wells for sand control, and I would say traditional workover for replacing gas lift valves. So this is a very traditional work-over that we have to do in all fields with the mature areas that we have in Campos Basin. Beside that, in some areas we have also some electrical submersible pump replacement work to be done. For example, this affected P-57 production,” said Formigli.

Teaming with FMC Technologies
In terms of subsea engineering FMC Technologies is at the forefront with important projects in Brazil, such as the subsea separation system at the deepwater Marlim field at the Campos Basin, which is one of the major global subsea separation projects in existence. “Subsea oil/water separation, as-delivered in Marlim is the first step in removing enough water to prevent flow assurance issues,” said Rob Perry, Director of global subsea processing systems for FMC Technologies.
Marlim is Petrobras’ largest field in the Campos Basin, located 110 km (70 miles) offshore Rio de Janeiro. It was once considered the world’s largest subsea development, with 129 wells and 8 floating production units (FPU), devoted to the extraction of oil and gas. The Marlim field is spread out between depths of 640 to 2,590m (2,100 to 8,500 ft.), with the separation system itself located at the 900m mark (2,950 ft). This is the first system worldwide to include deepwater subsea separation of heavy oil and water, with sand removal systems and reinjection of water to boost production in this mature field. The separation system also includes cyclone modules that will perform water treatment before re-injecting the water back into the reservoir. The separated gas is added back to the oil stream to aid its lifting to the FPU, while the separated water is pumped back into the reservoir to further increase production. FMC supplied the subsea separation and pumping system, utilizing a novel pipe separator design, licensed and developed in cooperation with Statoil. The system is being engineered by FMC’s operations in Brazil, Norway and the Netherlands with final manufacturing and integration activities performed at the company’s Rio de Janeiro facility. For this project FMC is responsible for the offshore commissioning and for technically assisting in the installation. “Marlim is the fifth field in the world that will utilize FMC’s subsea separation technologies,” said Tore Halvorsen,. “The project will enable a broader application of our separation technologies for future subsea processing opportunities.”

Subsea 7
Subsea 7 is another major Petrobras partner in subsea engineering and construction projects. Only this years Subsea 7 has been awarded a $350m, five-year contract for a pipe-laying vessel. The contract covers the operation of Kommandor 3000, a 118 m PLSV with a top tension capacity of 15 tons, two work class ROVs, two 30 ton cranes and three carousels for flexible pipes. The PLSV is capable of installing flexible lines, umbilicals and equipment to a depth of 2,000m and will start work under the contract this year. Victor Bomfim, Subsea 7’s Senior Vice President for Brazil, said “Subsea 7 has one of the most advanced vessel fleets in the world for subsea engineering and construction, and we look forward to supporting Petrobras in future developments.” Another important Subsea 7 project is the seabed-to-surface Guará-Lula NE project. Guará and Lula are part of the large pre-salt discoveries made by Petrobras in the Santos Basin, Brazil in ultradeep water depths of beyond 2,100m, 300km from shore. The Guará-Lula NE project is a US$ 1billion contract awarded to Subsea 7 in 2011 by Petrobras and to date is the largest EPIC-SURF contract awarded in Brazil. The project scope includes the subsea engineering and the subsea installation of four decoupled riser systems featuring large submerged buoys supporting 27 steel catenary risers. The engineering and project management work is ongoing at Subsea 7’s offices in Rio de Janeiro. The SCRs are being reel-laid by the Seven Oceans vessel and hooked-up to the subsea buoys. The production and water injection lines are constructed predominantly from Mechanical Lined Pipe (BUTTING BuBi). This is a result of a joint development programme by Subsea 7 and BUTTING, with Petrobras participation. Offshore installation commenced during the second half of 2012, using Seven Oceans, Acergy Polaris and Skandi Seven.

The Steel Lazy Wave Riser
Another interesting Petrobras development in subsea engineering is the Steel Lazy Wave Riser (SLWR) setup, which has optimized the cost of the Sapinhoá Norte riser collection system. The technology enables the use of steel risers connected directly to an FPSO. This riser system includes the use of floats in mid-water so as to afford a geometry that will provide the steel tube resistance to fatigue during the life of the project. Petrobras undertook extensive optimization studies on the system’s structural configuration for the Santos Basin scenario, which enabled the choice of the SLWR for Sapinhoá Norte. The study allowed for the minimization of pipes with metallurgical clad in the production risers; that could be substituted in 70% of the length of the risers, for mechanical clad ones, which are less expensive and more readily available on the market. This will be the first SLWR connected to an FPSO anchored by spread mooring system, and the first in the Santos Basin pre-salt region. This will be the fourth system in the world to use the SLWR, after the Bonga Field, in Nigeria, the Parque das Conchas (BC-10), in the Espírito Santo Basin, and the Stones Field, in the Gulf of Mexico (still under development). However, Petrobras is reportedly having a frustrating time installing these riser-buoys, which are considered to be key equipment to increase production at the Sapinhoá and Lula Northeast plays. The project includes four submerged riser buoys, each weighing around 2,000 tons, hooked up in pairs to two FPSOs. “We have faced serious problems in the installation of the first of these two systems and this has caused long delays. The reason for this includes susceptibility that the installation vessel (Seven Polaris) has shown to maritime conditions,” said Formigli.
He also explained that the first buoy is still held by temporary tethers but installation is expected to move forward in November, as maritime conditions in the South Atlantic become more agreeable with the onset of summer. The first pair of riser buoys are expected to start producing by the end of January, several months after the original deadline. 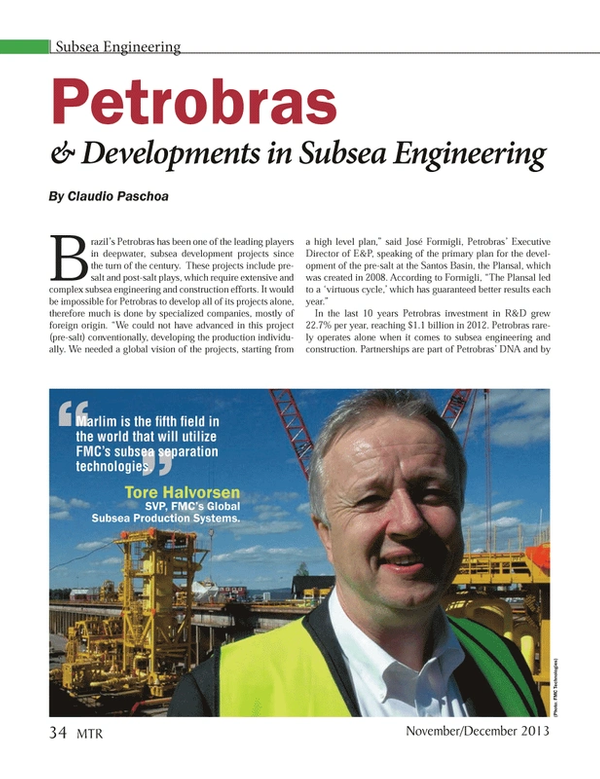