The Rise of the Work-class ROV Market

In the latest edition of its World ROV Operations Market Forecast, Douglas-Westwood (DW) expect annual expenditure on work-class ROV operations to increase from $1.6B in 2013 to $2.4B in 2017, a compound annual growth rate (CAGR) of 11.3%. The market is expected to total $9.7B over the period, a growth of 79% over the previous five years.
Expenditure is forecast to increase more than operational days due to the move towards deeper waters and more complicated offshore field development programs. These are demanding higher specification, higher cost ROVs to cater for their support needs.
Drilling support, of both exploration and appraisal (E&A) and subsea development (DV) wells, is the main ROV activity demand driver, accountable for 75% of the total expenditure between 2013-2017. Construction support accounts for 20% and repair and maintenance (R&M) for 4%.
The largest regional market is expected to be Africa, with Latin America, North America and Asia also important players. The ‘Golden Triangle’, comprised of Brazil, the Gulf of Mexico and Africa, is forecast to account for the majority of global ROV demand, but Asia will see significant growth.

Global ROV Supply
The current industry structure is the result of many mergers and acquisitions over more than 30 years. The world fleet of work-class ROVs currently consists of 1,102 units operated by 25 companies. Of this the top ten players dominate the market with almost a 60% share. Oceaneering are the largest operator with 316 ROVs in its fleet, accounting for approximately 30% of the global total with their operations primarily being on drilling support.
In its 2013 Q3 release, Oceaneering says it anticipates adding 20 units to its fleet. Longer-term, the company believes it could add 90–95 incremental vehicles (55 drilling support, 40 vessel support) by 2017 based on its current market share and its outlook for demand.
Drivers and Indicators
While ROV support is needed in a number of different industries, such as research and military, and on offshore wind-power projects, their primary use is in the oil & gas sector. Thus, the global demand for energy of which oil & gas makes up 57%, is the main underlying driver behind ROV demand. Oil & gas demand has grown substantially in recent years, increasing by 31% since 2000 and primarily driven by the developing world. Demand is forecast to keep growing significantly as oil, particularly in its use within the transportation industry, cannot be easily substituted by alternative energy sources. As supply from conventional resources begins to limit, production will have to move to deeper water, creating a greater need for ROVs as activity in all areas of the subsea market increases.Some ROVs may be installed on a vessel where they are essential but not used on a full time basis. However, others may be in virtually continuous use, particularly those used for drilling support. Therefore, there can be significant differences between the total available days of the ROV fleet and actual operational days. ROV support activity is driven by a number of other supply and demand side-factors;
•    Increasing offshore exploration, appraisal and development, and the move to deeper water drives expenditure on ROV drilling support operations.
•    Increasing installation of subsea equipment and hardware, requiring greater ROV construction expenditure.
•    A large and growing offshore infrastructure of platform installations, subsea wells, flowlines, cables etc., driving the use of ROVs in the subsea inspection R&M market.

Market Forecast
ROVs are used for various subsea construction support and drilling support activities, as well as the repair & maintenance.

•    Drilling Support
ROVs are needed to support the drilling of E&A and DV wells. While E&A wells account for the largest proportion of ROV drilling support (69% in 2013), subsea DV wells are expected to experience higher growth during the 2013 to 2017 period, increasing at a CAGR of nearly 10%.

•    Repair and Maintenance
The demand for ROVs to be used for R&M activities is driven by the ever increasing volume of installed subsea hardware. However, R&M only accounts for a very small proportion of the total ROV market (4% in ‘13 and ‘17).

•    Africa
Africa will remain the largest market between 2013 and 2017, with total Capex forecast at $2.4B during this period. Angola and Nigeria in West Africa are significant deepwater locations, forming part of the so-called ‘Golden Triangle’ of deepwater oil & gas. The discovery of new deepwater provinces offshore East Africa will further drive the demand for ROV operations in this region.

•    Latin America
Latin America is forecast to be the second largest market with a total spend of $1.9bn during the five-year forecast period, predominately due to the large number of discoveries and developments offshore Brazil, where deepwater reserves are increasingly being developed and the region is also moving towards developing its ultra deepwater (>2,000m) pre-salt reserves. For these reasons, expenditure in Latin America is forecast to grow the fastest rate of all the regional markets at a CAGR of near 16%.

•    Asia
Asia is expected to be the third largest ROV operations market during this period, with expenditure forecast to total nearly $1.4B between 2013 and 2017. Production was previously restricted to shallow water activity, but there are now a number of projects that are either producing or underway in deepwater areas. Thus demand for ROV support has increased in recent years, and since 2009 Asia’s spend on ROV activity has been higher than that in North America, its previous competitor.

•    North America
Issues relating to the Macondo well oil spill in the Gulf of Mexico meant that between 2009 and 2010 the North American oil & gas industry faced a significant downturn, particularly when coupled with the global economic recession. However, an increase in offshore drilling rig numbers and substantial forecasts in subsea hardware expenditure will drive demand for ROV support to pre-Macondo levels in 2013. The majority of ROV activity will be in the US Gulf of Mexico, where major deepwater oil finds are expected to drive growth of ROV demand.

•    Australasia
Between 2009 and 2012 the demand for ROV support offshore Australia remained very steady, but a sharp increase in demand in 2013 meant ROV days almost doubled from their 2012 levels. Large shallow-water gas developments now dominate subsea activity here, so Australasia’s demand is set to decline substantially over the forecast period.

•    Middle East
The Middle East is the smallest ROV operations market, accounting for less than 2% of the global total ROV days in 2013. As a predominantly shallow-water region, the growth in activity levels forecast in the other regions is not expected to be mirrored in the Middle East. Expenditure on ROV support in the Middle East is forecast to fall substantially, almost halving as it decreases to $27m in 2017. ROV activity in this area is almost entirely driven by trunk-line installation and E&A well drilling support.

•    Norway
Norway is expected to see a decrease in the Capex associated with ROV support activity during the forecast period as expenditure falls from $119m in 2013 to $113m in 2017, mainly due to Norway being a mature region with little deepwater development and existing production concentrated in relatively shallow waters.

•    UK
Another mature market, the UK is dominated by shallow water developments and is only anticipated to see a small increase in ROV support demand between 2013 and 2017, at a CAGR of 4%. Drilling support expenditure is forecast to be the most significant part of this rise.

•    RoWE
The Rest of Western Europe is also a mature region with limited deepwater activity, with relatively low levels of ROV demand during the forecast period. Growth is expected to be steady, again at a CAGR of less than 4%.
Increasing water depths of oil & gas industry operations is the key driver of future work-class ROV demand as more activity becomes beyond the reach of divers.  Globally there is strong growth for work-class ROV operations over the 2013 to 2017 period with drilling activity forecast to account for the largest proportion of demand. As ultra-deep waters are drilled and developed there will be a growing need for high powered ROV’s, increasing the total spend.
The deepwater ‘Golden Triangle’ regions of Africa, Latin America and North America are expected to continue to hold the most long-term growth potential and the biggest markets. Asia will also show significant growth.

The Author
Kathryn Symes joined DW in 2013, graduating from Queen Mary College University of London with an MSci (Hons) Economics degree and then working for an investment firm in China. Since joining DW she has carried out research in the oil, gas and renewables sectors including numerous FPSO orientated research engagements, oilfield services and offshore and onshore logistics projects. Kathryn is also lead author of DW’s World ROV Operations Market Forecast 2013-2017. 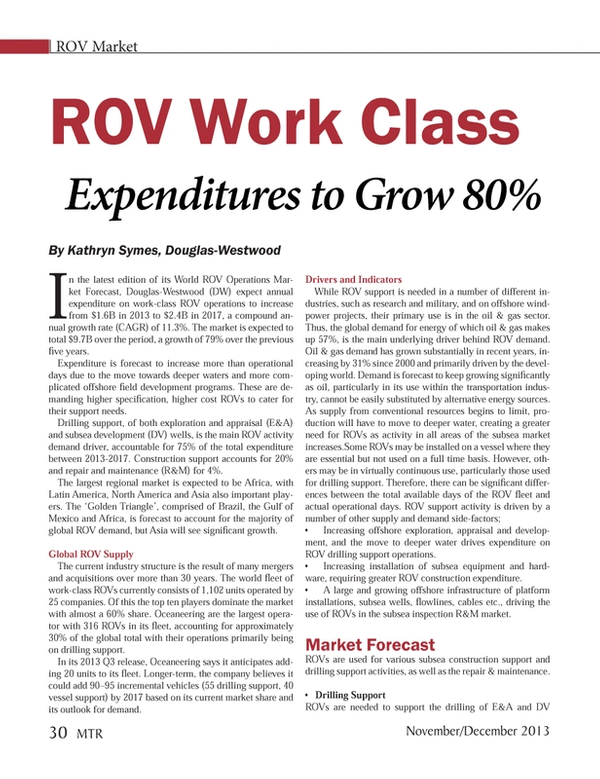 Read The Rise of the Work-class ROV Market in Pdf, Flash or Html5 edition of November 2013 Marine Technology