At Ocean Business 2015, DOF Subsea will launch its Skandi Explorer service to the European Market. Previously used in academic studies, this technology is new to the oil and gas market.

The recent and sudden contraction of the Offshore Oil and Gas market has compelled operators to cut costs, while maintaining the high safety standard required in the industry.  During these events in the past the Oil and Gas industry has innovated, implementing high-tech autonomous technology to deliver safer and more cost effective solutions. We believe that a new wave of technology can once again provide considerable cost and technological benefit to our industry.
In mid-2014 we launched the Skandi Explorer program in our North America region to further our use of Subsea Autonomy in the Oil and Gas industry and provide a brand new type of autonomous service to Oil and Gas companies.  The Skandi Explorer program was built around the Teledyne Slocum Glider vehicle, leveraging this unique autonomous robot’s ability to stay at sea for extended durations while being remotely managed by technicians onshore.  Unlike the survey class HUGIN AUVs that DOF Subsea operates, the gliders seek to quantify properties of the water column, not the seabed.  Additionally, the gliders move through the water column in a vertical seesaw pattern (called a ‘yo’) due to the fact that the primary propulsion is buoyancy-change driven.  Gliders only move propulsion motors at the top and bottom of a yo. These motors are internal to the vehicle and are not connected to propellers.  After moving the motors required to change the vehicle pitch and buoyancy, the system takes advantage of free energy motion all the way to the bottom (or top) of the yo.  This propulsion type dramatically reduces the energy consumption of the vehicle, allowing it to stay offshore for extended durations.  The buoyancy engine of a glider provides an ultra-efficient, acoustically quiet way to navigate the water column.
At the ocean surface, the vehicles call in to servers onshore via an iridium modem. During this time the gliders interact with human operators, transmit data, and receive new instructions. This operational control of the vehicles can be performed from anywhere on the globe with a secure, stable internet connection.
There have been hundreds of these vehicles built previously, yet these systems don’t come out of the box ready to work in the Oil and Gas industry.  A considerable effort was made to commercialize the technology. This started with the development of an integrated, web-enabled GIS piloting system which pulls in public domain and proprietary piloting data from the internet and local sources.  Piloting gliders from thousands of miles away can be a challenging task.  The software we built, named GPI, reduces operational risk by providing near real-time data to pilots about the environment, ships in the vicinity, and the location of any surface or subsea infrastructure.
Many improvements were also made to the launch and recovery methods for the systems, ensuring the vehicles’ field operations comply with Oil and Gas Operator regulations.
Traditional surface vessels are expensive, but are often tasked with measuring properties of seawater or monitoring environmental conditions.  These are functions for which gliders were originally designed and which they can accomplish at a fraction of the cost.
Recently in the Gulf of Mexico, we deployed three of the glider systems into a loop current eddy to prove that the vehicles were capable of simultaneously navigating and collecting useful data in challenging environmental conditions.  The vehicles experienced surface currents in excess of 3.5 knots but were able to effectively navigate once below the effect of the eddy.  Every 4 hours the vehicles would call back to the Houston-based flight control center. The gliders provided data about the eddy water mass and, more importantly to the operation, actionable information about the speed and direction of the current.   In the past vessels have been used to monitor the current in challenging areas.  By using glider vehicles clients may save tens of thousands of dollars per day or enable water current observations that were previously outside of the budget.
During the three week test, the vehicles were also collecting fluorometric data including backscatter and Colored Dissolved Organic Matter (CDOM).   These data may be used as a marker for the presence of hydrocarbons in the water column, allowing gliders to remotely monitor drilling operations or pipelines for spill event markers.  Indeed this method of observation has already been used by government researchers during the Deepwater Horizon / Macondo oil spill incident.
Overall, gliders are another good example of how autonomous technology can provide enormous commercial, operational, and environmental benefits to an industry which has extremely high safety requirements and shrinking budgets.  Gliders can not only collect environmental data, but can provide the operational support that surface vessels provide now, all at a fraction of the cost.
Market forces and technological advancements are converging to where glider technology may soon become a mainstay of the Offshore Industry for data-aided operational decisions and environmental incident response. 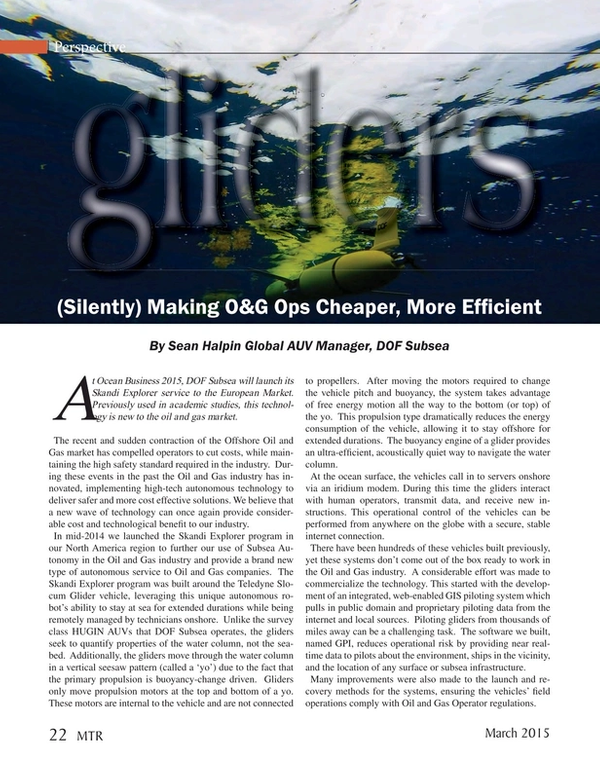