“Our collective expertise and infrastructure related to harsh environments and the Arctic sets us apart as the premier location and jurisdiction for carrying out R&D that will define how to safely and efficiently develop Arctic opportunities.”
Those were the words of Newfoundland and Labrador Premier, Hon. Paul Davis, at a recent address announcing a $4.9 million investment by Fugro GeoSurveys – a leading geoscience company with a corporate history of more than 50 years – in collaboration with the Research & Development Corporation of Newfoundland and Labrador (RDC) to operate a new Arctic-class vessel, with research and development capabilities, in the province’s waters in 2017.
“Our investment in this initiative, and the resulting access to an ice-class vessel, with R&D capabilities, will further strengthen our position in this area,” said Davis. “This is an investment in a key asset that will solidify our position as a real-time Arctic laboratory.”
Newfoundland and Labrador is Canada’s easternmost province, strategically positioned in the North Atlanic, at the edge of the Arctic. It sits along Iceberg Alley, along multiple key international shipping lanes, and its waters are the Northern hemispheres coldest south of the Arctic Circle. It is this unique mix of proximity and Arctic-like conditions that make the province a natural cold ocean laboratory.  Centuries of answering the challenges of Arctic-type conditions have given rise to a powerful culture of innovation.
Home to growing sectors such as oil and gas, shipping, education and training, and research and development, as well as traditional sectors such as mining and commercial fisheries, a bevy of experts go to work every day in the province, seeking to increase their ever-growing aptitude for operating in harsh conditions. This includes remote sensing, ice management, ocean observation, simulation, telecommunications, and navigational systems, and the best minds in academia, private enterprise, and industry operate in a highly collaborative fashion.
The evolution of Newfoundland and Labrador’s vibrant ocean technology cluster has been long and distinguished. Historically, the province has been a launching point for Arctic exploration and today it is a hotbed for cold ocean expertise.
The maritime entry point to St. John’s is the iconic Narrows, flanked by the historic Cape Spear – the most easterly point in North America – and Signal Hill, where Marconi famously received the first trans-Atlantic radio transmission at the turn of the twentieth century. While its unassuming, tourist-luring, brightly colored houses and downtown packed with heritage buildings only hints at its global standing in ocean technology via the vessels moored at its docks, what lies beyond is a network of cutting-edge infrastructure, facilities and expertise.
Playing an important role in the province’s ocean technology cluster is Memorial University (MUN), home to the Fisheries and Marine Institute (Marine Institute or MI for short), which has students from every province in Canada and is the number one producer of seafarers in the country. MI’s Center for Marine Simulation (CMS) boasts the largest suite of marine simulation technology in North America. The university is a production line for wave after wave of graduates with cold ocean expertise, including ship operations, vessel design, ocean instrumentation and equipment, marine information and communication technologies, ocean mapping, and underwater technology.
MUN is also home to the Genesis Center, a small business incubator that helps to grow business startups – including ocean technology companies – and advance technology developed at an academic level into commercialization.
Virtual Marine Technology (VMT) exemplifies the power of this process. Incorporated in 2004, VMT specializes in small vessel simulation, meeting a need in the global market. While simulation of large vessels was already very advanced a decade ago, there was a dearth internationally of simulation technology for small craft, and search and rescue (SAR) craft in particular. VMT is an example of a Newfoundland capacity in ocean technology that became a global economic opportunity.
This capacity runs not only along the corridors of academia, but through high-tech labs filled with 3D printers, prototyping workbenches, and banks of glowing monitors. Members of the ocean technology cluster take their creations out into the field, the field itself intricately replicated in simulators and test centres.
The Full Mission Ship’s Bridge Simulator at CMS is a 30-ton ship structure mounted on a hydraulic base in a surround theatre that can accurately simulate any ship and sea state, anywhere in the world. It is one of sixteen (soon to be seventeen) high-end marine simulators at the Center.
Also home to St. John’s is the impressive ocean technology and engineering facilities of the National Research Council, Canada’s premiere Research and Technology Organization. With expertise in ocean, coastal and river engineering, arctic conditions are replicated in their ice tank – the longest in the world – conducting physical testing to demonstrate the effects of freezing and thawing on scale model vessels and structures. NRC also provides numerical modeling to provide a comprehensive test bed for the world’s harshest environments.
Beyond their testing facilities, NRC’s experts conduct full-scale testing in the field to compare and validate the data generated in their world-class laboratories. NRC works to solve research and technical challenges to transition projects into commercial opportunities on a daily basis. Investiture in scaled testing and trials help industry de-risk and mitigate the costs of full-scale implementation.
C-CORE can also be counted among the storied institutions central to the cluster, housing two centers of excellence, known for its knowledge of sea ice and icebergs, and for developing techniques to mitigate risk through ice management and remote sensing.
While these institutions demonstrate the depth of ocean technology expertise in the province, the cluster’s breadth grows day-by-day. Mature companies continue to push the boundaries of innovation, while specialized startups – led by entrepreneurs and backed by the Province’s commitment to support them – tread new paths of excogitation and execution.

Broad Range of Expertise
C-CORE, for example, was established in 1975 as the Center for Cold Ocean Resources Engineering.  Today, through its Remote Sensing group (the largest concentration of such expertise in Canada) and LOOKNorth Center of Excellence, it utilizes satellite technology that can produce imaging of a very large area, down to centimeter-level detail, providing critical ice surveillance to feed mitigation strategies.
On the other end of the spectrum, EMSAT is a late-stage startup specializing in the design of real-time monitoring solutions that has been around for about four and a half years. Having benefitted from the Genesis Center and leveraged funding opportunities in the province, EMSAT is a team of seven with its own office space, developing and producing powerful data monitoring and reporting software that is now being utilized as far afield as Brazil to connect with MetOcean buoy system.
Seaformatics Group is in the process of commercializing its crowning creation, the Seaformatics ‘Pod’, a 20 ft. tall, 1400 lb. unit with a 6 ft., floating horizontal-axis turbine tethered to a weighted base by a flexible member, enabling it to harvest power from water currents in basically any direction.
Whitecap Scientific Corporation is also housed at the Genesis Center and has engineered a system that allows two standard cameras to be mounted side by side to create three-dimensional models of underwater sites that can then be analyzed and manipulated in the lab, allowing users to pin notifications to the model itself and to layer older models over newer ones to track the evolution or degradation of a structure.
Newfoundland and Labrador’s ocean technology cluster extends outside of St. John’s city limits, too. MI’s Holyrood Marine Base provides a venue for studies in areas such as marine environmental studies; marine biology, marine ecotourism, diving, and oil spill response.
In Conception Bay South, Kraken Sonar Systems Inc. has developed the a Synthetic Aperture Sonar; a technology it was recently invited by Parks Canada to bring to the Arctic in a successful search for the lost vessels of the Franklin expedition. In the Town of Clarenville, SubC Imaging is quickly becoming known for its subsea camera technology, its soon-to-market 4k camera the first of its kind.
These companies are all examples of startups within the past five years that are already having a significant impact on their respective markets, but established companies also have a considerable presence in Newfoundland and Labrador. Oil producers such as ExxonMobil, Chevron, Husky Energy, Statoil, and Suncor have been active in the province’s abundant oil fields for decades.
As announced recently, Provincial Aerospace (PAL) is partnering with Airbus to bid on Canada’s upcoming Fixed-Wing Search and Rescue contract.
Major names like Fugro are adding further strength to the mix. Technip Group is another world player that is seeing increasing activity in the province, where it has held an office – the center of its Canadian operations – since 1997.  It has been involved in every major offshore development project in Atlantic Canada to date, including Terra Nova, White Rose, and Hibernia. An important contributor to the region’s success, more than one billion barrels of oil has flowed through Technip pipe in Eastern Canada to date, and it is heavily involved in a number of Arctic and sub-Arctic initiatives, some of which are at an advanced stage of development.
“Positioning ourselves in Newfoundland is really ideal because we have that government support, we have the facilities, and there are world-class researchers here at the university that we collaborate with,” said David Shea, Engineering Manager at Kraken Sonar Systems Inc.
The government support Shea speaks of is another important element in ensuring the continuing growth of the cluster. Through programs and initiatives such as its Arctic Opportunities Initiative, the Province is working to provide support, build capacity, create international awareness, and facilitate relationships and partnerships.
“We have a very healthy, collaborative environment,” said Whitecap Scientific’s Sam Bromley. “You have a lot of complimentary companies in the region. There’s an attitude that, ‘we’re here to build something that’s greater than any one company’. There’s a lot of support from government agencies to foster innovation. Overall, it’s just a perfect place to develop ocean tech.”
Long-running industry associations such as Noia (Newfoundland and Labrador Oil and Gas Industries Association) and ADIANL (Aerospace and Defence Industry of Newfoundland and Labrador), and cluster organization, OceansAdvance (the voice of the province’s ocean technology cluster), further bolster the efforts of the Province to promote Newfoundland and Labrador’s awesome ocean technology capacity around the world.
“We have not only the heritage and a part in developing some unique technologies; we’ve got the core knowledge, we’ve got continuous research, and we’ve demonstrated we have the entrepreneurs that are needed to take an idea…to commercialization,” says Noia President & CEO, Bob Cadigan. 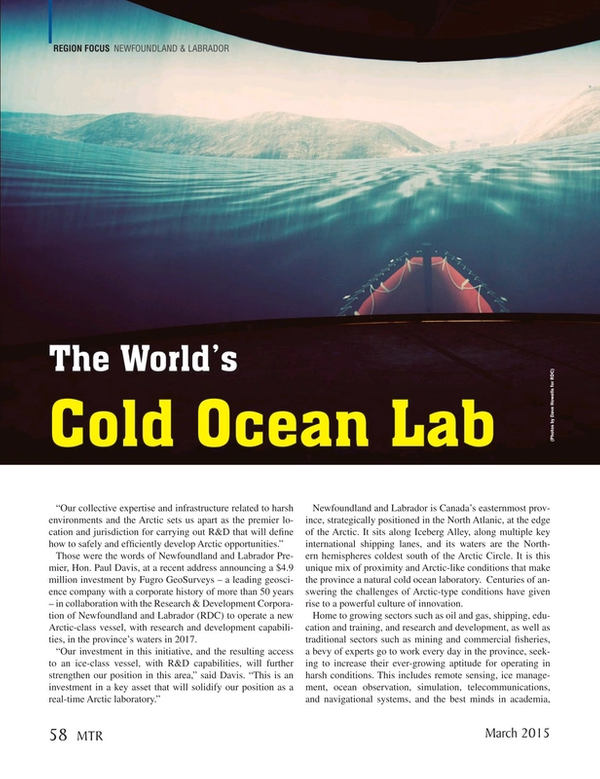