Mapping the Abyss with AUV Photography

Despite being one of the largest habitats on Earth occupying around 60% of the surface, the deep-sea environment remains largely enigmatic. It was only in the late 1960’s that the abyssal plains were recognized to contain rich, complex habitats and play an important role in global carbon cycling. The technological and operational challenges that come with studying deep-sea environments have previously restricted research into the inhabiting species and ecosystem structure. The development of a novel photographic method for deep-diving Autonomous Underwater Vehicles (AUV), hails major advancements in deep-sea research, enabling scientists to map entire communities of benthic megafauna on remarkable scales.

The evolution of underwater vehicles and imaging technology has amplified efforts in seafloor mapping over the last decade. Only in recent years has more significance been placed on the location of species and the factors that influence ecosystem dynamics and biodiversity.
The intensification of industrial movements within the deep-sea setting creates the potential for loss in species abundance and many ecosystem services. Additionally, climate change can cause unexpectedly large changes to the deep-sea environment. As such, research into how these factors will impact deep-sea ecosystems has become a priority for many scientists. This can only be achieved however by understanding how these habitats work at present, which is critical for the ability to manage and conserve deep-sea environments in the future.
“If we wish to understand how the oceans work and what impact climate change may have on the function of the oceans, it is vital we understand the abundance, distribution and biodiversity of animals in the deep-sea,” said Dr. Kirsty Morris, Seabed Image Analyst at the UK’s National Oceanography Center (NOC) and the lead author of this research, published in ‘Limnology and Oceanography: Methods.’ “Only by knowing this, will we be able to begin to understand what impact climate change may have on the oceans productivity and carbon sequestration ability as a whole.  It will also allow us to assess the impact of human activities such as deep-sea mining, oil and gas exploration, and the increasing presence of litter.”

Deepsea Survey Methods
Conventional methods for the study of deep-sea megafauna include trawl sampling and photographic and video surveys. Deep-sea trawling has often been used to assess diversity and density of species, but this method poses some technical issues and can only be used over a relatively small area. Scientific trawling can also be time consuming and does not provide spatial information on how the individuals were distributed. Furthermore, some species can be destroyed altogether in the process and often considerably under represented.
Towed cameras have much the same issues. While off-bottom towed cameras are able to provide within-transect spatial data, the tethered systems can be effected by swell causing difficulties in controlling the position, altitude, and speed of the camera. On-bottom towed camera sleds do have better stability but can damage the seabed and consequently the induced turbidity can cause issues with the image quality.
Remote Operated Vehicles (ROVs) are seeing an increasing use in deep-sea underwater exploration, and can now reach depths of up to 6,000 meters.  ROVs are valuable in deep-sea studies as they are able to retrieve samples and provide researchers with high resolution imagery. The limitations however are that they once again cannot be used for large survey areas and require a lot of dedicated ship time, limiting the other science that can occur in conjunction.
AUVs can act as stable imaging platforms and cover large survey areas with little environmental impact in the form of noise pollution and disturbance. Additionally, AUVs do not require continuous lighting and can also collect large volumes of data efficiently without consuming ship resources. The species that are regularly under represented by other sampling methods can be observed and identified. At the same time, local environmental data such as habitat and resource availability can be recorded along with spatial and quantitative data. As such, it is recognized that AUVs have the potential to unlock previously inaccessible areas and rapidly increase our knowledge of species distribution across survey areas reaching up to landscape scales.

New Method for Deepsea Mapping
A new photographic processing technique developed by scientists at the National Oceanography Centre (UK), used a camera on the Autosub6000 AUV to enable them to take a continuous stream of high resolution photographs of life on the sea floor. This method was developed and tested as part of the NERC funded AESA (Autonomous Ecological Surveying of the Abyss) project and revealed a tenfold increase in the precision of deep-sea ecosystem diversity estimates, relative to the use of scientific trawling.
“We have developed a method where we are able to take a continuous image of the seafloor over scales not previously achieved. This was done by using an AUV to take images every 0.87 seconds with an overlap between each of the images,” said Dr. Morris. “This data can then be used to create maps of the seabed, detailing how many animals are present, where they are present in relation to one another and in relation to any features on the sea-bed, such as hills.”
Dr. Kirsty Morris was part of the team of scientists who developed an automated program where each of the images were corrected for non-uniform illumination (where one side of the image is darker than the other). A color correction also had to be applied where the red, blue and green light was ‘lost’ through the water column from the AUV to the seafloor. Each image was then geo-referenced using the heading, pitch and roll, recorded from the vehicle and re-scaled so that each pixel within each image represented the same area.
Using the positions of the images, it was then possible to work out the overlap and place them together in 10 image segments called tiles. Once these tiles were annotated for the presence and size of animals, the positions, length and identification of individual animals were recorded, creating a map of biodiversity on the seafloor.
“This technology is important because it allows us to create an image of the deep-sea over large areas, almost like a google street view. This is done in a cost effective manner using the AUV, meaning that the ship can be collecting other samples at the same time,” Dr. Morris said. “From these images, we get an insight into the deep-sea environment on scales not previously possible, which will enhance our understanding of that environment and our impact on it.”

The Future of AUV Photography
As climate change and growing human activity intensifies the pressure on seafloor resources, it is increasingly important to better document deep sea marine biodiversity and ecosystems. Technological advances such as deep-sea ROV and AUV systems have allowed us to begin accessing areas which were previously not possible. As these systems advance, there is an increased ability to cover even larger areas and develop more advanced mapping tools.
“It is hoped that there will be an increase in automation both in the image processing and in the image annotation. Automated annotation is something that would allow us to process the images and obtain results quicker; this is currently being worked on by some colleagues in Germany,” said Dr. Morris.
While this technique was developed to map the distribution and biodiversity of remote deep-sea communities, there are many applications which would benefit from AUV photography, with the potential to increase along with improved automation.
“I am currently working on a system to automatically detect and measure phytodetritus (organic particulate matter resulting from phytoplankton and other organic material in surface waters falling to the seabed) aggregation on the seabed using these images,” said Dr. Morris, “This will allow us to discern any link between the distribution of these aggregates with the topography of the seafloor and the animals that are in that area.”
The distribution, abundance and biodiversity of communities within any habitat is particularly important when establishing marine conservation areas. The method developed by NOC is currently being used to assess changes within community structure over a three year period within a marine conservation zone, Haig-Fras, in the Celtic sea.
A project called Shelfseas Biogeochemistry (SSB), will also utilize this technique to map out four different transect areas with various seafloor substrate (mud versus sand), assessing species composition in each area and if this changes following the plankton bloom in the spring.
In the future, advancements in automated technology and image processing will allow larger areas of the deep-sea to be mapped, increasing our understanding of the distribution of species, their abundance and biodiversity. This will allow researchers to better predict the impacts of climate change and ocean acidification and the consequent implications this would have for carbon sequestration, impacting the ocean ecosystem as a whole. Accurate environmental assessments of the impacts of human activities, such as deep-sea mining and oil exploration, will also become increasingly vital over the coming years. Not only can this technology accurately assess impacts in the direct vicinity of the activity, it will also be able to assess impacts over areas far larger, which is not economically viable with conventional deep-sea survey methods. 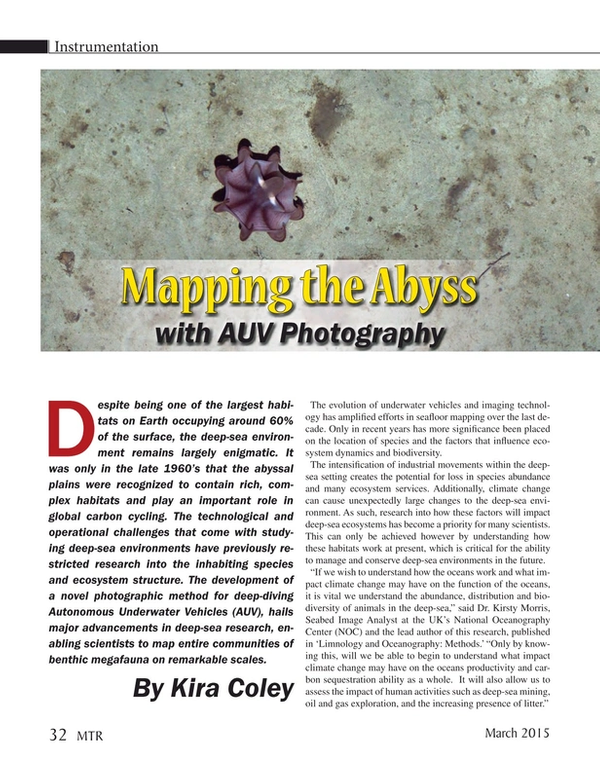