Oceaneering is a pioneer and leader in the world of subsea robotics, and a ‘by the numbers’ look at the company provides a staggering view. Oceaneering operates a fleet of 275 work class ROVs – the world’s largest– as well as 60 observation class ROVs. The ROV division has approximately 2,400 full-time personnel, with about 2,000 of these people in the field. And with ROVs diving daily it conducts more than 100,000 missions in a year.  While the numbers are impressive, Oceaneering is not immune to the prolonged downturn in the offshore energy sector, and it has retired units that have come to the end of their working life, trimming the ROV fleet from its peak of 318 work class ROVs in 2014.
With its leadership, Oceaneering has been and remains a driving force in the technological and capability development of ROVs. “We’ve identified some gaps in the market. As we move forward, autonomy, remote operations, speed, and reliability are all coming into play,” said McDonald. “We see more remote and autonomous operations taking place that are in line with the industry focus of reducing risk to personnel and lowering carbon emissions with fewer assets at the worksite.

Additionally, there is a need for more specialized equipment. Today, ROVs are working in deeper waters on increasingly complex work scopes and also in harsh shallow-water environments with high-current, low-visibility areas, so it is essential to have higher-powered units with high-specification and reliable intervention capabilities that are able to work efficiently through the full range of environmental conditions in the frontier oil and gas, and renewables sectors.”

Specifically, the company has a team dedicated and specializing in technology and new product development that is working on the next generation of vehicles, which will encompass residency, robotic, and autonomous functions, according to McDonald. “We’re developing this technology at an advanced stage now, and we expect to be trialing one of our next-generation vehicles in Q3 2019.”

Significantly, the company conducted a demonstration of remote operations and autonomous docking in the Gulf of Mexico, where it remotely piloted an ROV, which was stationed on board a drilling rig, from its operations center in Houston while also performing autonomous docking functions. “Remote piloting technology is maturing and is currently operational in the North Sea, where we have a number of contracts. We’re piloting ROVs remotely from our mission support center in Stavanger, Norway. This center has enabled us to complement ROV operations offshore with onshore operations,” said McDonald.

When McDonald and his team look at emerging technology trends, they see software and control systems technology – which go hand-in-hand – as the most pivotal to move the market forward faster.

But he noted that machine learning and machine vision are important, too. “We have been working on automated operations, such as auto docking, where the ROV pilot can direct the ROV to move autonomously to a docking point by moving a cursor on the screen, without any intervention on the joystick. It is the machine vision recognition software tied into the control and inertial navigation systems that allows it to perform those tasks consistently. This is still an emerging technology, and it takes a little time to dock autonomously. Finally, he notes that the telemetry, control systems, and communication links for ROVs have come a long way, too.

Last, but certainly not least, McDonald points to the development of Oceaneering’s “Empowered ROV” – or E-ROV – as an indicator of its view on the future of subsea robotics. “E-ROV is a resident, battery-powered ROV that will go subsea with a surface buoy. It’s a work class electric vehicle with a hydraulic power pack to support its manipulator functions, and it is controlled remotely from our onshore mission support center with communications via the 4G broadband network, using a self-deployed surface buoy,” said McDonald. “We believe (E-ROV) is a significant technological advancement to the next stage of subsea ROV residency. Our next generation of vehicle (the Freedom ROV) will be supported by a docking station at seabed and will have a hybrid functionality that will enable it to operate in two modes: remotely piloted via tether to provide real-time control – or operated in an autonomous and tetherless mode, using battery power.”

To read the full interview with Martin McDonald, visit:
www.marinetechnologynews.com/news/martin-mcdonald-division-oceaneering-587529 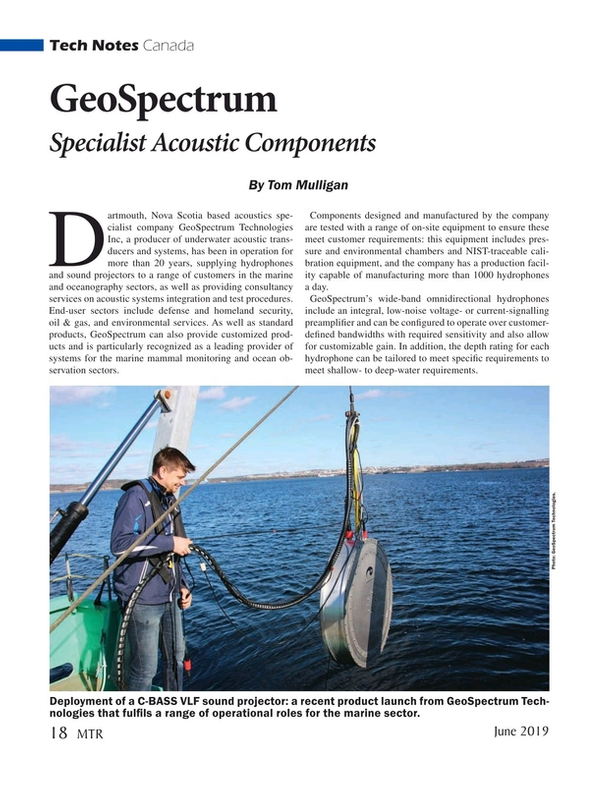