There are probably few industries that experience more dramatic up and down cycles than the collective businesses of energy exploration, production and transportation. If so, then one of those that do is shipbuilding. That’s because the most recent shipbuilding boom – at least the one on this side of the pond – was driven primarily by the now long-forgotten energy boom. With $100 crude now but a distant memory and stakeholders pining for $70 oil in the near term, you wouldn’t think that shipyards would be looking to up their game on the human resources side of the equation. But, that’s exactly what they should be doing.

Savvy boat builders are now looking even closer at their business models, especially from the employment side of the equation. And, the discussion is no longer just about ‘head count,’ although that’s still a big part of the calculus. Increasingly, the use of so-called contract labor is becoming a larger percentage of shipyard skilled trades positions. That said; your grandfather’s definition of casual labor no longer applies.

The complex world of offshore, longshore, Jones Act and worker’s compensation issues now demands a far more esoteric look at how, when and under what conditions you should contemplate allowing contract labor to step even one foot into your shipyard. Within this edition, you’ll learn why, and more importantly, how to do it. Make no mistake: how you handle this part of your operation during the doldrums, in the long term will define in what condition you emerge into the next upswing.

Beyond the question of how the next generation maritime professional – afloat, ashore or somewhere in between – is compensated and insured, the larger issue of technology is looming as the biggest wildcard for the maritime industry and its labor component. The possibility of autonomous ships is no longer a fantasy; no more so than the emerging reality of airborne drones impacting not only military applications, but everyday life as well. Technology is slowly automating the most dangerous of tasks, gradually dragging a reluctant labor component into the future. In this edition, Patricia Keefe’s in-depth look at the world’s rapidly developing, high-tech intermodal terminals doesn’t necessarily foretell the end of labor as we know it. Instead, the story presages a time when the waterfront job of tomorrow will bear little resemblance to what happens today, even in the busiest of ports. The story begins on page 28.

More than just changing employment models in a way that enhances the bottom line, tomorrow’s maritime professional is already emerging today in the form of a more diverse workforce. I look ahead to a time when that metric becomes the rule; rather than the pleasant exception. In order for that to happen, the maritime industry needs to do a better job telling – and selling – its story to the young people of today. When that day comes, the need to need to educate employers about how to attract the best and the brightest to the business of ocean commerce will all but evaporate. 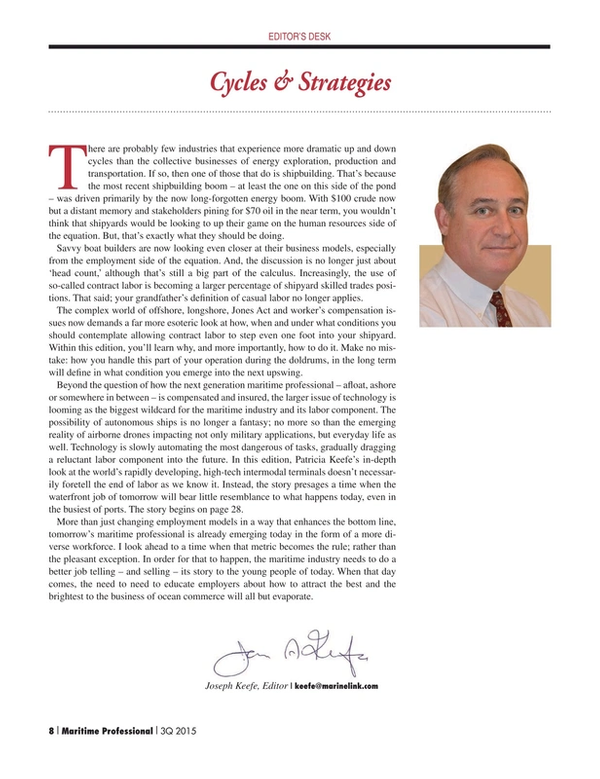