The Human Aspect of the Autonomous Ship

Arguably a long way off, the autonomous ship is likely coming. What that means for labor, the stakeholders that prepare mariners to go to sea and the firms that will operate these futuristic vessels is another thing altogether.

According to Dr. Jeremy Rifkin, a Wharton professor who has advised the European Union on Sustainability, among other things, we are in the midst of a ‘Third Industrial Revolution.’ It is here where information technology and new energy sources are upending business models that have thrived since the second iteration – the era of electricity, fossil fuels and mass production in central locations. The maritime world has seen numerous glimpses into the future, with technologists offering their visions on ships of the future, often driven by both economics and the emissions of energy.

Though the implications for shipping are profound, there has been much less thought given to the human aspect of the autonomous vessel.

The Autonomous Ship – a Revolution
A refreshing change comes in a new report, Global Marine Technology Trends 2030, authored by the IACS member Lloyds Register (LR), in conjunction with the UK-based consultancy QinetiQ , and University of Southampton. Commercial shipping is one of three segments examined in the report, which also looks at naval vessels and Ocean Space, which also delves into natural resources extraction. The authors delve into the ‘fourth industrial revolution,’ not yet upon us, but coming, which they say describes how “…‘smart devices’ will replace the role of humans for the management, optimization and control of machinery.”

It is a telling coincidence that the release of the LR report coincided with an announcement by Rolls Royce that it will be utilizing bandwidth supplied by Inmarsat as it further advances its Advanced Autonomous Waterborne Applications Initiative (AAWA). Plainly speaking, this project is about developing vessels that would be remotely controlled from the shore. Oskar Levander, Rolls Royce Vice President of Innovation, Engineering and Technology, asked rhetorically, “Given that the technology is in place, is now the time to move some operations ashore? Is it better to have a crew of 20 sailing in a gale in the North Sea, or say five in a control room on shore?” Ronald Spithout, President of Inmarsat Maritime, explained that: “Fleet Xpress (the platform being deployed in AAWA) will enable the ship-to-shore communications required to support the remote control functionality fundamental to the realization of the autonomous ship.” The AAWA project, now benefiting from a €6.6 million funding infusion from the Finnish Funding Agency for Technology and Innovation, shows that the voyage towards 2030 (where LR chose to take its snapshot of the future) is well underway.

The Future of Seagoing Labor
LR and their colleague authors recognize the dualities surrounding technological advancement, saying: “Technology, of course, is a double-edged sword and has the power to deliver great benefit, but can also introduce both direct and indirect threats to industries, states and economies.” This sword is arguably pointed directly at the human element. While Rolls Royce (and others) focus on the technologies, the view from LR also tackles manning issues, and emphasizes changes in required skill-sets for seafarers.

One section of the report acknowledges a growing manpower shortage when it comes to maritime skill sets that the ‘fourth revolution’ will require. The authors write, “There are over 104,000 ocean-going merchant ships. The shortage of highly-qualified sea-going staff is an increasing concern, especially as ships become more complex due to environmental requirements. The lack of gas engineers is quoted as a major barrier for the gas-fueled shipping transition.” Last year, in LR’s report, on Global Marine Fuel Trends - 2030 (written in conjunction with researchers at University College London), the various forecasting scenarios consider the increased shares of LNG fueling, but also look at methanol and hydrogen fueling- both of which would require expertise not found in the maritime sector.

Although automation and remote monitoring certainly figures prominently in the newly released 2030 report, the LR team states, “Smart shipping is not necessarily about removing people from ships, but about better connecting ships and their crews with specialized onshore resources.” Consider that LR’s view of new on board kit includes “Dispensers” (robotics for handling laundry, for example), “Searchers” (automated searching in the event of man overboard) and even “Repellers” (presumably fighting pirates, though this is not stated explicitly). Security, a dangerous part of the business for humans, is one where they may be more readily replaced, with LR commenting: “Maritime autonomous systems are driving the biggest revolution in maritime security in over a century.”

Just as radio officers are now considered archaic in the maritime world, job qualifications will continue to evolve. We already have specialist electronic officers. In the discussion of job creation and job losses, the 2030 report’s authors offer, “While new technology will create the demand for new skills, the smart ship efficiencies achieved may render some maritime professions obsolete, as with other technological evolutions. Only time will tell if the net effect will be positive or negative.”

Different Ships; Different Long Splices (skills)
The shift envisioned is towards highly skilled professionals. The writers also note that, “… new skills are already being requested, mostly linked to data management and analysis. Other jobs linked to the engineering side of the technologies to come will include: data grid engineer, remote automation engineer, engineering and naval crew, onboard support technician, shore support specialist or cyber-attack specialist.”

While not replacing the people, “Big Data” may help the skilled professionals make informed judgements as they run their vessels. That’s because the authors note that the complexity of modern ship systems has taxed crews’ ability to manage them. At the same time, the report insists, “The sophisticated analysis of the deluge of data from intelligent, wireless sensors and extensive communication and satellite systems has the potential to further reduce operating costs, increase safety, and enhance environmental protection.”

Considerable thought has gone into the behavioral aspects of circa 2030 technologies, as seen in the detailed discussion of Human–Computer Interaction (HCI), which is all about the study and design of the interface between people and computers. Rather than just installing monitors and indicators, thought must be given to the human element of sharing of the data deluge which is spewed out by advanced systems. The writers note: “For any system where people are ‘in the loop’ with computers, HCI plays a crucial role in ensuring that the system serves its purpose effectively. HCI as a discipline is challenging; there are fundamental differences between how the human brain and computer processors work – HCI seeks to bridge this gap.”

On shore, in our personal lives, we’ve already seen a shift to smart-phones and portable devices. In the maritime realm, the crew on the 2030-built vessel s will see things quite differently. The report writers reprise our present state and rapid progress on land, but less so at sea, saying, “Over the last decade, the technology enabling HCI has developed most rapidly on consumer devices, such as smartphones and tablets, which use multi-touch displays. In contrast, the majority of traditional fixed workstations and personal computers still use the ubiquitous interfaces of mouse, keyboard and display.”

Looking forward, the authors prophesy that, By 2030 we can expect a number of new HCI technologies to replace or augment those we currently use, both in fixed locations and when on the move. These technologies will enable us to interact with computer systems in new ways and will be smart enough to recognize our requirements and our personal preferences. Many of these technologies are familiar to us now and include gesture control, speech recognition, and eye tracking. When combined, these technologies promise to dramatically improve our experience working with computers. Other technologies likely to make an impact over the next decade include brain-computer interfaces and intelligent personal assistants … software entities that are designed to act like personal secretaries.”

As the knowledge workers complete the shift away from greasers and oilers (who, in turn, replaced coal stokers of the original Industrial Revolution), it’s envisioned that machines will handle these lower skilled jobs. LR takes the view that “With faster technological advances, there will be a move towards delegating authority from the human operator to the machine. Machines will perform many more of the tasks which are considered dull, dirty and dangerous to achieve a higher level of safety and efficiency.” Maritime security, to be handled by “Repellers,” falls into the “dangerous” bucket.

Clearly, there are choices here, leaving room for certain owners to carve out their brands as people-friendly, or not. The report adds, “There are varying degrees by which a human can delegate responsibility to a machine, depending on the nature of the task and goal they wish to accomplish, and depending on the levels of automation and autonomy built into a ship.” This observation brings perspective to the comparison with Rolls Royce, with its AAWA project representing one view in the spectrum of commercial shipping automation.

Looking Ahead – and Behind
Leadership at shipping companies, maritime academies and training institutes serving the industry will no doubt either marvel at all the new technologies as they read through the LR report, or dismiss them as fantasy. The latter attitude is probably a mistake. When reading the chapters on commercial shipping, all stakeholders need to be thinking very hard about the implications for their companies, and/or for the welfare and safety of the cadets and officers being prepared for the ships of the future.

Anyone who doubts that the ‘autonomous’ revolution is coming to the waterfront only need look to the U.S. military, where young officers are already thinking about moving away from becoming fighter pilots as they watch drones increasingly do the lion’s share of remote bombing and surveillance work. Could this shift in job perceptions presage a similar move in the maritime arena – where changes may take longer, but will impact employment roles nevertheless?

Advances in waterborne shipping for more than 50 years were measured primarily in deadweight, LOA, beam and draft. That’s about to change, albeit slowly. The ship of the future will likely be measured by the number and quality of the bells and whistles that make it float. And if this is indeed the case, the quality of the professionals running it will be even more important.

The Author
Barry Parker, bdp1 Consulting Ltd. provides strategic and tactical support, including analytics and communications, to businesses across the maritime spectrum. The company can be found online at: www.conconnect.com


(As published in the 3Q 2015 edition of Maritime Professional - www.maritimeprofessional.com) 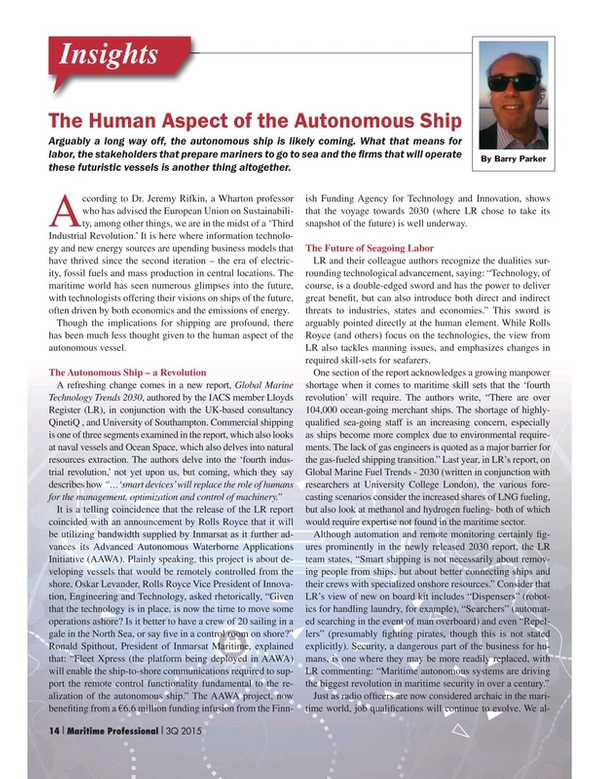 Read The Human Aspect of the Autonomous Ship in Pdf, Flash or Html5 edition of Q3 2015 Maritime Logistics Professional