Mercy Ships: A Life at Sea for All the Right Reasons

Captain Tim Tretheway’s selfless journey at sea spanned almost 30 years and helped to change literally hundreds of thousands of lives – for the better – in the process.

Captain Tim Tretheway’s career path, especially viewed from today’s sometimes mercenary maritime business climate, can be safely characterized as unusual. Rising up from the foc’sle, Tretheway also eventually plotted a professional course line that took him to virtually every corner of the globe. And, unlike today’s mariners who demand – and get – top dollar wages in most disciplines, Tretheway has largely toiled for the intangible reward of serving the greater good. If there is a more unusual and compelling professional story on the water today, then it hasn’t yet crossed my desk.

Mercy on the Water
Tretheway has been “volunteering” with Mercy Ships for more than 28 years, working his way up to Master. Mercy Ships, a global charity, has operated a fleet of hospital ships in developing nations since 1978. In a nutshell, Mercy Ships uses hospital ships to transform lives and serve nations one at a time. According to Tretheway, Mercy Ships “brings hope and healing to the poor, mobilizing people and resources worldwide.”

Tretheway told MarPro in August, “In the Mercy Ships sense, ‘volunteer’ means someone who steps up and says, ‘I want to be a part of impacting the world, of doing some real good, with my professional skills beyond keeping the world economy working.’ It means finding the means and time to come, for whatever time one has available, to be a part of something bigger than self, something so deep that a child has a future or an old man first sees his grandchildren. Experiences like these are the reward – not financial, but altruistic.” That’s because, at Mercy Ships, there are generally no salaries on board. Typically, all crew members find their own financial support.

Tretheway is not alone in his life’s work. He explains, “I have been faithfully supported by friends, family and church at home. Among those who ‘pay my salary’ are serving and former U.S. mariners, Coast Guard and Navy officers, and others. Some of these latter supporters could not ever come themselves, but they ensured that an aspect of their careers included supporting the work of the Mercy Ships technical operation by helping colleagues who can make the commitment. This makes them part of the amazing stories we see every day on board, and they can see those stories on the website.”

Clearly, this kind of endeavor simply cannot be done in a vacuum, or alone. For example, crewmembers are volunteers, so donations made generally go directly to operating the ship, purchasing fuel and paying for all the free services Mercy Ships provide. Companies such as Johnson & Johnson and Alcon supply surgical equipment and consumables. Other companies help on the technical side. For example, Rolls Royce helps by donating parts and services to help maintain the ships, and Advanced Weather Technologies provides a great weather forecasting software system. Mercy Ships accepts ‘goods-in-kind’ donations of required items or services. Tretheway adds, “Mercy Ships could use the support of a major fuel company to ease the strain in that area, and it would help focus resources even more directly to helping those in need.”

Climbing the Hawsepipe
Tretheway’s first marine license was a 50 ton inland master with sail auxiliary endorsement, followed soon thereafter with a coastal license. Early on, he also earned an AB ticket, where, he says, you had to demonstrate some skill before a stone-faced Master Chief. Growing up on Puget Sound, Tim’s early years were spent on the water, fishing with his father and grandfather, and sailboat racing with friends. Still another family member, an uncle was a commercial fisherman, and Tretheway gained some experience there, as well. Eventually, he began to deliver boats up and down the sound, and later all over the region.

Tretheway looks back and says, “I am glad I can say I am a hawse-piper. The years of hands-on experience, including wire rigging – which you generally don’t see any more, gave me insights and understanding that just does not come from a book or classroom. I had great instructors: an ex-USCG CPO, a true British tar from Glasgow whose accent was incomprehensible but skills unsurpassed, a Master from India, a former U.S. Naval officer and many, many others. I tried to learn something from every officer, captain and AB I served with, and that included the engineers too.” He adds, “Being a hawse-piper silenced many grumblings, because every order I have given to a rating has been backed up with real experience, so there can be no complaint.”

Tretheway’s career took off long before STCW came into play, and he managed to qualify for some MARAD training, which predated and (he insists) far exceeded the current BST requirements. He explains, “This early training initially gave me some deferment time as STCW standards were debated and sorted out. The early STCW was not approved by the Coast Guard, which put my license at odds with some countries when I was sailing foreign at first, but the MARAD training helped offset some of these issues.

With the implementation of STCW-95, Tretheway began to do all the required courses. These he had to do at his own expense. Also at that time, however, he began his service with Mercy Ships, and some of the training centers and/or instructors gave discounts. “That really helped,” he said.

But, for Tretheway, it was never easy. “The challenge came when I was trying to upgrade. This was before you had to present training certificates for everything to the USCG and could demonstrate your competency through sea time and in the exam room only. I had to buy my own textbooks and supplies and design my own course to cover the material. A great friend and professional mariner stepped in to help, buying most of the study materials and textbooks I needed. Without that help, I would have had to walk away.” Along the way, Tretheway experienced countless acts of similar kindness.

For others on board the Mercy Ships, ship-specific STCW requirements also apply. Tretheway lays out the technical details, saying, “Since there are no SOLAS or International regulations defining ‘hospital ship,’ our organization is faced with two classification possibilities: Passenger Ship or Special Purpose Ship. The trouble with the latter is that every element must be evaluated and possibly tested, documenting and gaining approvals for nearly everything, as this is a catch-all sort of category. Therefore, a non-governmental hospital ship is most closely related to a passenger ship. The larger vessels operated by Mercy Ships have been passenger classed and are considered active vessels, so we maintain a very comprehensive drill, testing and maintenance schedule for all SOLAS, ISM and other requirements. Technical crew must meet all passenger ship STCW requirements such as Security Awareness, Crowd and Crisis Management, etc.”

A Different Calling
Unlike many (most) mariners, Tretheway had the luxury of spending virtually his entire seagoing career with his wife, and child. That said; Tretheway describes an unusual and rewarding relationship. “I met my wife on board our old flagship when she came as an Administrator. I got her into my department because she was a certified forklift driver, so she could fill two functions. I left a short time later for other duties, but we kept in touch. Since we were both motivated to serve before we met each other, we found it an easy transition to living and working together on board.”

In terms of family life, life aboard the Mercy Ships is anything but routine. At any one time, there are 40 to 50 children on board the Africa Mercy, children of the long-term crew. Mercy Ships runs an accredited international academy and Tretheway believes that the school is second to none. “Our son has had a great education so far. The class sizes are very small, 3-5 students perhaps, and he is exposed to languages, cultures and races from all over the world. He is totally color-blind in terms of race and culture and sees people for who they are, not how they look … even the deformities he sees with many patients.”

In actual practice, Mercy Ships don’t spend a lot of time underway, unless redeploying to a different region; typically two months of underway and technical periods. Drills and training are conducted continuously. For holidays, Tretheway and his family often take advantage of the amazing locations they serve to have family time ashore. He adds, “They are usually not tourist hotspots, but are unique and often places people always want to visit, but never do. Otherwise, we regularly return to the United States or the UK, which we currently call home.”

A Long Sea Passage
Tretheway joined Mercy Ships in January 1987 and has since served on most, if not all of their platforms. According to Tretheway, there was a great sense of history on board the old flagship, Anastasis, an Italian liner built after WWII. As for his total experience, he wouldn’t change any of it. “I loved the smaller Mercy Ships vessels, as these ventured into the more remote locations, some not even properly charted. These ships had very hardworking, versatile and adaptable crews and truly impacted the world’s most forgotten poor. With each ‘new vessel’ the capabilities and livability have improved. The current Mercy Ship, the Africa Mercy, has high initial stability, which is a good thing for the eye surgeons. It also has a vastly larger hospital and surgical area, greater than all the previous vessels combined.”

Putting those tools to work means everything, says Tretheway. “There is no comparison knowing that what you do has given a future to an otherwise dying child, changed a community’s priorities and even a nation’s view of the importance of healthcare and the need to alleviate the suffering of their people. While I interact with the poorest of the world’s poor, I have also met many presidents and prime ministers and other world leaders. I don’t know of many organizations that can really say they impact an entire nation in the way Mercy Ships does.”

In all things there comes a time for change, and soon, Tretheway and his family will end their time of service with Mercy Ships. Tretheway says, “There are many factors, finances being one of them. We have always had what we have needed as a family, but with only a few ‘earning years’ left, we thought it was time to look for a position to prepare for the later years and to start saving for our son’s future education. We will probably live in the UK, are open to possibilities and are going to take a break and see what may present itself for us as a family.”

Tretheway steps ashore after more than 28 years – far richer than a Wall Street hedge fund trader – secure in the reward that comes with lifetime friendships and the knowledge that the world is a little bit better because he came and said ‘yes’. That’s a job well done, Captain Tretheway. Bravo Zulu from MarPro. 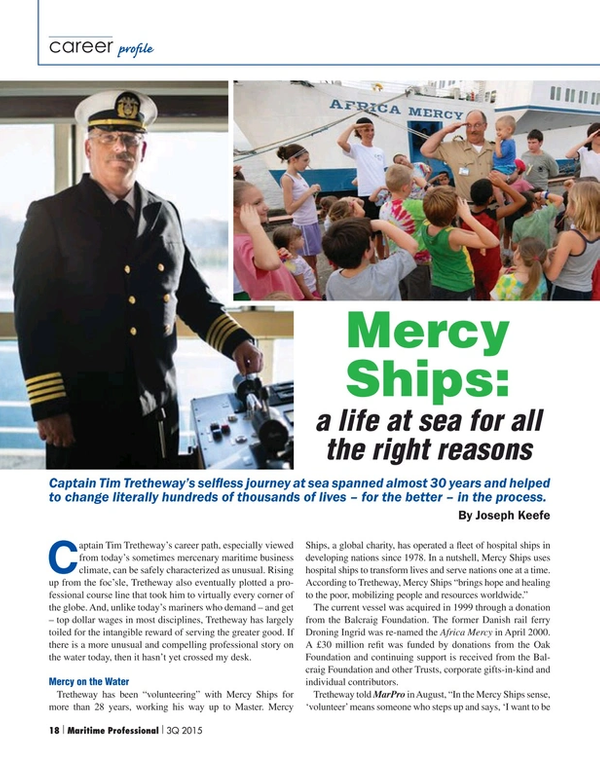 Read Mercy Ships: A Life at Sea for All the Right Reasons in Pdf, Flash or Html5 edition of Q3 2015 Maritime Logistics Professional