In recent months, there have been many press and industry reports to suggest a growing interest in LNG shipping, the reports being a mixture of favorable and unfavorable news for owners and operators of LNG carriers, but leaning toward a generally improved outlook for LNG shipping.

This apparently improved outlook is in contrast to historical developments in world LNG shipping expectations. The anticipated future boom in LNG shipping demand, which has consistently been forecast since the inception of seaborne LNG export trades in the mid-1960s, has continually suffered postponement in the past.

The result is that at mid-1977, there were still only nine baseload LNG export trades in operation, which together generate a shipping capacity requirement of only 1.5 million cubic meters per annum, while the existing supply of LNG carriers is almost 2.9 million cubic meters, nearly double that level. Indicatively, at end-July 11, LNG carriers aggregating 1.2-million-cubic-meters capacity were laid up or had been inactive for two months or more.

At present, therefore, there is a gross oversupply of very expensive shipping capacity in the LNG trades, a situation which, on the basis of currently scheduled future developments, will not be corrected until at least 1982.

However, during the next eight years as many as 15 new LNG export projects could come onstream, and these could increase world LNG shipping requirement in 1985 to as much as 15.1 million cubic meters per annum, 7.6 million cubic meters more than the total capacity of the LNG fleet currently scheduled for 1985.

Recent developments improving the outlook for LNG shipping include the coming on-stream or the impending startup of some new projects and a reaffirmation of the status of other future projects. The Abu Dhabi Das Island gas export project came on-stream at the end of April, although deliveries to Japan, and indeed the entire operation, have been held up due to the cargo contamination by metal bolts, suffered in the first shipload. This suspension (which involves stripping down most of the hardware involved — liquefaction plant, the gas carrier and reportedly the shipyard) will continue until the source of the bolts is located.

Two other major trades are due for imminent startup: (a) the first half of the Indonesia—from Badak in East Kalimantan — to Japan LNG export project due to have started August 1 (the second half — from Arun in North Sumatra — is scheduled to come on-stream early in 1978), and (b) the first major trade to USEC, known as the El Paso I project, which should be on-stream from Algeria before end-1977. Algeria has recently contracted with German and Dutch gas importers for LNG exports to Wilhelmshaven and Rotterdam beginning in 1984, while the USEC-destined Panhandle (Trunkline) project has been given FPC approval though under condition of incremental gas pricing to consumers, rather than the preferred averaged-in price system.

Elsewhere, other possible future projects have advanced, notably those in Nigeria and Malaysia, where construction of liquefaction plant is soon due to begin, also in Indonesia, where expansion of existing newbuilding gas export plant is being contemplated, and on the N.W. Shelf Australia, where gas exports by 1985 look highly likely, despite the lack of any definite plans concerning the siting of liquefaction plant, the export volumes available, or finance. In Canada, Arctic natural gas has also excited topical interest, and liquefaction plant engineering studies for Melville Island reserves are in progress, while tenders have reportedly been placed with shipyards for suitable LNG carriers. Other reports concern the possibility of massive Swedish LNG imports and the continued Soviet desire to enter the LNG exporters club with trades to the U.S. and Japan, who would also provide both finance and technology.

However, press reports unfavorable to LNG have also been in evidence, with U.S. political involvement being a major factor.

Lack of FPC approval has forced the cancellation of the Algeria- USEC Eascogas project, though this may be recontracted at lower import volumes. Two Burmahcontrolled ships for the Eascogas trade have been switched to the Indonesia-Japan trade and replace the last two newbuilding vessels required here, which now become possible cancellations. Two other Algeria-USEC projects, Tenneco and El Paso II, are still awaiting FPC approval, with decisions being expected before end-1977, while USWC LNG import projects remain highly uncertain.

FPC recommendations for pipeline imports of Alaskan gas seem to rule out new Alaskan supplies of LNG, while Californian import terminal approvals are still being sought for Indonesian LNG supplies.

If successful, environmental pressures forcing LNG reception sites offshore in California would ensure that no USWC LNG imports could begin prior to 1985.

These reports involve negotiations for the postponement of delivery of newbuilding LNG carriers, the unworkable economics of LNG exports from the Middle East Gulf to USEC and West Europe, and the reopened Algeria- Italy pipeline gas export contract (which presumably undermines a planned LNG shipping project between the same parties).

In summary, prospects for LNG shipping have improved slightly in the past half year, but the immediate outlook remains depressed due to the expected excess shipping supply up to 1982.

However, the prospect of potential LNG shipping demand growth beyond 1981 is a plus point, but this growth rests on plans that are liable to postponement in the future. 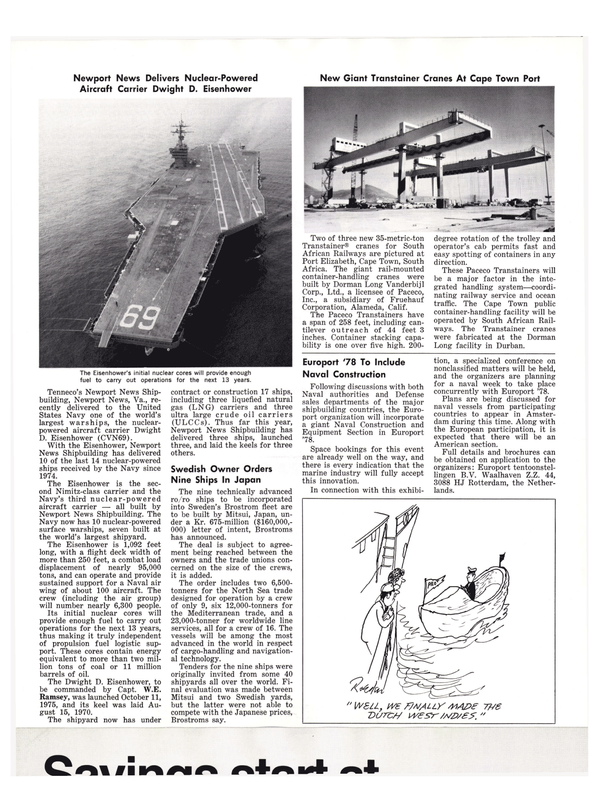