Bid packages for the construction of the ship will be available from the Matzer firm on November 1, 1977.

The Tropic Jade will be the largest ship to be built for Birdsall.

The other Matzer-designed vessels, the Tropic Day, Tropic Flyer and the Tropic Isle, are all 225 feet, while the new ship will be 296 feet overall. It will have a breadth of 56 feet, a 19-foot draft and a draft loaded (mean) of 14 feet 6 inches. It will have a bulbous bow.

Like all other Matzer-designed vessels, the new addition to the Birdsall fleet will be built for increased productivity, maximum service, economic operation, and exceptionally fine maneuverability.

The design is a twin-screw flush-deck, stern-loading ro / rocontainership that will be powered by two 16-cylinder GM16E6A engines. They will have 1,950 horsepower each with 900 rpms, and a service speed of 14y2 knots.

Equipped with a 400-horsepower bow thruster, Lufkin reverse reduction gears and slip clutches, the helmsman can maneuver the vessel into a dock without the assistance of tugboats. The helmsman will be located at a remote control station aft of the pilothouse.

Access to an 88-foot-long hold that will be suitable for autos, and general cargo will be via the flush deck with a hydraulically operated hatch cover that will measure 22 feet by 11 feet.

The stern ramp, also hydraulically operated, will be 48 feet wide, and the ship can accommodate 132 twenty-foot containers.

Thirty r e f r i g e r a t e d containers may be maintained by three 12V71 generators. Six after ballast tanks will serve to trim the ship while loading and unloading.

The bulwark will be heightened to 8 feet to insure dryness and container protection.

She will admeasure under 1,600 gross tons, and will have a deadweight cargo capacity of 2,000 tons. The fuel capacity will be 325 long tons and fresh water will level off at 55 long tons.

The Tropic Jade will carry eight officers, eight crew, and will have accommodations for two guests. Her service will be in the Caribbean, touching the various island ports.

Extensive testing of the selfpropelled model of the Tropic Jade was made at the Netherlands Ship Model Basin at Wageningen, Holland. Mr. Matzer, president of the Jacksonville, Fla.-based firm, attended the series of model testings. 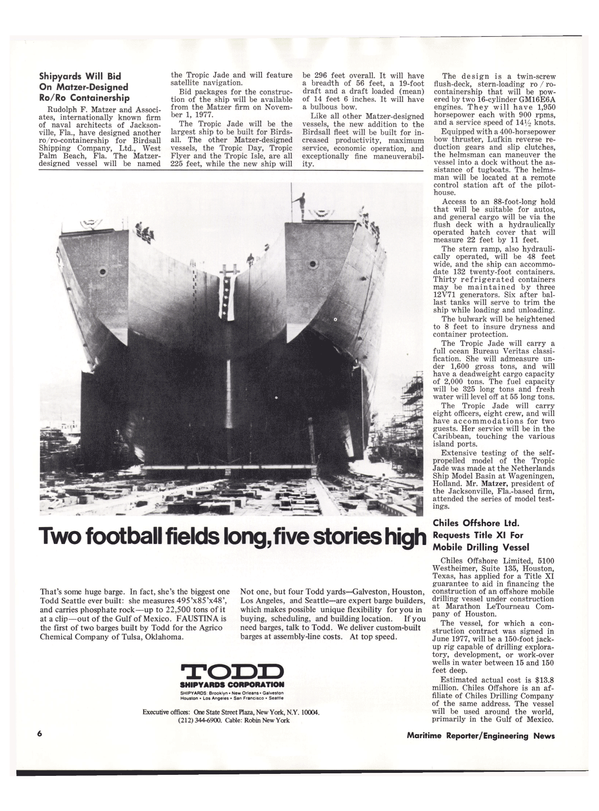