and Adriaan Volker Dredging Company, Rotterdam, Holland, has announced the signing of a $25-miIlion contract with Avondale Shipyards, Inc., a subsidiary of Ogden Corporation, to construct a split-hull hopper dredge.

The vessel will be named Eagle I and will be only the fourth of its type in the world. Construction will begin this month and conclude in 21 months.

The dredge will have the capability to clear channels and harbors throughout the world. It will be self-propelled and will be an oceangoing vessel, unlike conventional dredges. The length is 328 feet, the beam 68 feet, and the draft 22 feet. The hull will hold up to 4,750 cubic yards of material.

Mr. Bean said that the splithull design represents the most advanced technology available in hopper dredges. After sailing to a predetermined disposal site, the vessel's hull opens to release the dredged material. The dredge will help solve existing environmental problems in the United States associated with crowded inland disposal sites. Additionally, its digging depth of up to 80 feet will allow construction of several ports currently being planned throughout the country.

Eagle I will be financed under a Title XI guarantee from the Maritime Administration (Mar- Ad) of the Department of Commerce.

C.F. Bean Corp. is a New Orleans-based dredging company with operations on the West, East, and Gulf Coasts of the United States. International experience includes work in South America, Central America, the Caribbean, the Middle East, Africa, and the Far East.

Its operations are worldwide, and the company is a leader in the operation of all types of dredging equipment. Related companies within the Volker Group have extensive experience in major pipeline construction, heavy civil construction, offshore works, and related activities. 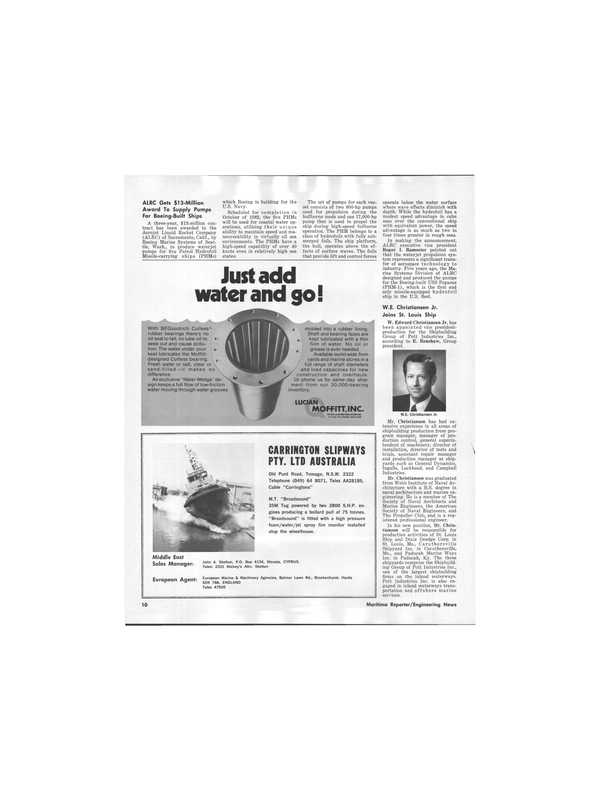