The Maritime Administration (MarAd) has released an extensive study on the liner segment of oceanborne shipping which examines three national maritime policy alternatives and projects their probable impact on American- flag operators in the nation's foreign trade over the next 10 years.

The options considered are that (1) the status quo be maintained, (2) the policy be modified to encourage more competition among merchant fleets of the world, or (3) the policy be changed to permit greater cooperation between American and other national flags carrying general cargoes.

The study on "The U.S. Merchant Marine and the International Conference System" was p r e p a r e d by Harbridge House, Inc., under a contract let in August 1977 by MarAd, an agency of the U.S. Department of Commerce.

Robert J. Blackwell, Assistant Secretary of Commerce for Maritime Affairs, said in announcing the results: "We expect this analysis to be extremely useful in exploring the various policy alternatives which the Federal Government is considering to end the chaos and restore stability to our liner trades. It is both timely and objective. For that reason, it should be a valuable tool to the Administration's Interagency Task Force which is studying maritime policy, to members of the Congress in their consideration of a number of bills designed to remedy the situation, and to the shipping lines in long-range planning." Mr. Blackwell stressed that "our purpose is not to advocate specific policies but rather to project the expected consequences of alternative courses of action, with special emphasis on topics of immediate concern to the Maritime Administration and the U.S. merchant marine, to which we provide Federal support under the Merchant Marine Acts of 1936 and 1970." The report noted that the U.S.- flag liner fleet, consisting of some 270 vessels operated by commercial firms, is fairly new, generally well managed, and highly innovative.

"Yet," it said, "the fleet is in a precarious economic position, for by and large the rate of return is not commensurate with the investor risks and, as a result, disinvestment rather than reinvestment is a real possibility." The report said U.S. policy on world trade is unique regarding liner conferences, the associations of shipping operators which establish the rates, terms, and conditions of liner cargo carriage.

The reference is to the Shipping Act of 1916, under which conference carriers in the U.S. to foreign trades may operate only within open conferences; that is, they may not exclude any wouldbe joiners. The rest of the world has generally opted for closed conferences where existing members may refuse the entry of new applications. The 1916 Act also forbids the use by conferences of measures designed to balance sup ply with demand and/or to obtain cargo via rebating and other economic practices.

The study examined these approaches to the shipping conference question: Proposals to continue present policies—maintain the status quo, continue to rely on the Shipping Act, approve shipping pools and equal-access agreements on a case-by-case basis, and generally support the open-conference system.

In its analysis, the study team used a computer model in performing more than 30 simulations to calculate the variations in profitability of vessel operation under the three different scenarios.

Three U.S. trades were chosen for detailed study and to exemplif y the different competitive environments.

They are the North Atlantic, Mediterranean, and the Venezuelan portions of the Latin American trade.

"The North Atlantic trade is an extremely i m p o r t a n t t r a d e that demonstrates the effects of current U.S. policies on a route served by well-established and well-financed companies from both the U.S. and our main trading partners," the report said. "The Mediterranean trade represents a more competitive and more unstable trade. The Latin American (Venezuela) trade is almost totally bilateral with a small 'third flag' component, and as such tends to be representative of the effects of increased cooperation." Altogether, 11 types of behavior — actions deemed most likely to occur during the 1977-86 timeframe — were simulated in the study; not all of them in each trade area, but including a base case for each and such additional factors as Eastern Bloc and the third-flag expansion, rebating, and capacity rationalization. The impact of these actions as indicated in the s i m u l a t i o n s are summarized by route and scenario in the report.

In its major general conclusions, the study team found that: Over the long run, adopting a policy of increased competition on all trades would mean that U.S.- flag operators would be fewer in number but larger in size. Substantial increases in competition in most U.S. trades would create problems for major trading partners and could intensify existing international shipping policy disputes.

A policy of increased cooperation would support the continued viability of a larger number of smaller operators and encourage their future participation.

"The primary concern of the U.S. Government must be to ensure the carriage of U.S. oceanborne cargo under conditions that will support the policy and achieve the objectives of the 1936 Merchant Marine Act, as amended," the report said. "The simulations demonstrate that with increased cooperation, these objectives are more nearly achieved." A limited number of copies of the full contract report are available for review in the MarAd Office of Public Affairs, pending publication by the agency. Copies of the executive summary are available upon r e q u e s t at the same office, Room 3895, Department of Commerce, 14th and Constitution Avenue, N.W., Washington, D.C. 20230. 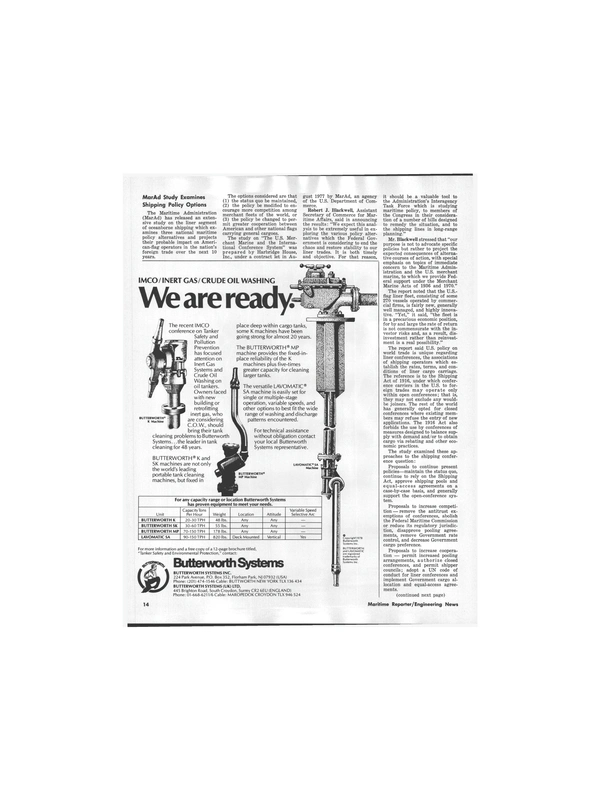