Bollinger Machine Shop & Shipyard, Inc. of Lockport, La., is building 16 Island Class patrol boats (WPB) under an $80-million contract awarded by the U.S. Coast Guard. These boats will be used for offshore patrol work involving law enforcement, surveillance, and boardings. Basic duties will involve drug law enforcement in the waters off the Florida coast, and when necessary, for search and rescue missions.

Prior to the recent delivery of the first vessel of the class, fleet dedication ceremonies were held at the Lockport shipyard, with Vice President George Bush officiating.

Also in attendance were Secretary of Transportation Elizabeth H.

Dole and Adm. James Gracey, Commandant of the Coast Guard.

Constructed with a steel hull and aluminum deck and superstructure, these vessels have an overall length of 110 feet, beam of 21 feet, and depth of 7.3 feet. They are powered by twin 16-cylinder Paxman Valenta diesel engines supplied through the British company's U.S. distributor and logistic supplier company, Alco Power Inc. of Auburn, N.Y.

Alco will also provide 16 spare Valentas, for a total of 48 engines.

The concept of this program of new patrol boats had its roots in a speech given by President Reagan at Miami in February of 1982, in which he promised government action to help curb the flow of illegal drugs into the U.S. Initially, the Southeast Task Force was created, later renamed the National Narcotics Border Interdiction System, headed by Vice President Bush.

The Coast Guard Request for Proposal (RFP) had as a basic requirement for the patrol boats the "Parent Craft" concept. It required bidders to base the quoted vessel design on a previously built and operated patrol boat. The original intention of the Coast Guard in specifying this concept was to be sure that the vessels would be free of the usual troubles associated with the first boat of any new design.

Bollinger offered a design that had been developed by Vosper- Thornycroft (UK) Ltd. At the time the Bollinger proposal was submitted, 24 vessels of this design were in service in South America, Singapore, and the Middle East.

The RFP required that the Parent Craft be selected by name; in this case the vessel selected was in service in the Middle East. One of the requirements of the RFP was that the propulsion configuration of the main engines be identical. Much thought and discussion took place on this issue at Bollinger because the selected Parent Craft was built in 1974 and had 16-cylinder Paxman Valenta engines, each with a continuous power rating of about 2,600 bhp and a sprint rating of about 3,000 bhp. The Parent Craft selected, to produce the speed necessary, needed about 2,900 bhp on each shaft in 1974, or very close to the sprint rating.

However, in 1984 the same engine was rated at 3,500 bhp continuous and 4,000 bhp sprint. Obviously, the Valenta had been upgraded to the point that the 12-cylinder Paxman had a continuous rating that met the horsepower requirements.

Differences between the Coast Guard patrol vessel and the original Vosper Thornycroft quoted include the deck house and internal configuration.

These were altered to meet Coast Guard requirements. There is also more tankage and a better view from the wheelhouse obtained by relocating exhausts through the sides of the vessel instead of up a stack.

The USCG patrol boat will have a continuous operating speed of more than 26 knots. Total fuel capacity of 10,600 gallons provides a range of 1,882 miles running at 26 knots, or 96 hours at the best economical speed, allowing for a 20-percent reserve.

Fresh water capacity of 1,700 gallons can be supplemented by a fresh water generator capable of producing 100 gallons per day.

The main propulsion engines drive through ZF reverse/reduction gears. Electrical power is provided by two 99-kw generators driven by Caterpillar 3304T diesels. An Avon Searider boarding boat can be dropped into the water from either side of the vessel using an Appleton davit; the boat stows on a raised section above the engine room.

Accommodations are arranged with one section aft of the engine room, and the galley, mess, and petty officer and crew quarters forward of it. The officers' cabins are in the deckhouse. Above the weather deck is one level of superstructure with the wheelhouse above it. The vessel is designed to accommodate two officers, two petty officers, and 12 enlisted men (with space for two more).

The superstructure features both open and enclosed steering positions, and a separate communications center. The sophisticated electronic gear is mostly governmentfurnished.

Commercial equipment includes a Raytheon radar with ARPA, and Raynav 750 Loran C; a Tracor Model 11 Omega receiver; and Sperry doppler log, gyrocompass, and autopilot. Also aboard are Sunair HF transceivers and receiver, two Triton and one Regency VHF transceivers, along with a hand-held VHF transceiver. The MF/HF direction finder was supplied by Sitex.

This Coast Guard contract is the largest single order ever placed at Bollinger, and required construction of new facilities as well as extension of existing buildings. It also required purchase of a computer system for weight control, a critical factor in construction of these boats. The vessels are being constructed in modular units, with the hull divided into six main modules.

The bow and stern sections are separate modules; the main section of the hull is divided both vertically and horizontally to create the remaining four modules. The transverse framing system of the vessel dictated the unusual horizontal division of the hull construction. 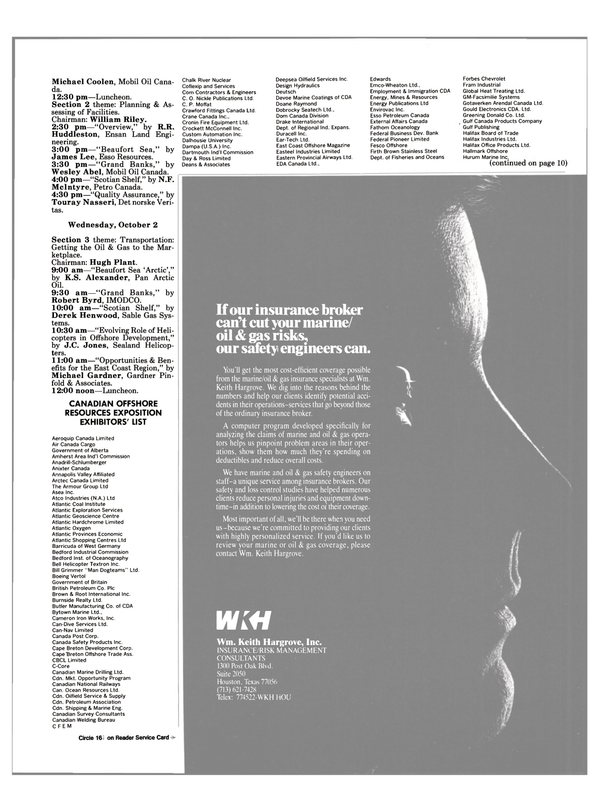