A More Leisurely Pace in Retirement?

Maritime Meanings Davy Jones In nautical mythology, Davy Jones is the spirit of the sea, usually cast in the form of a sea devil. Thus, the bottom of the sea is called Davy Jone's Locker, the final resting place of sunken ships, of articles lost or thrown overboard, and of men buried at sea.

It is the sailor's phrase for death, as in "He's gone to Davy Jone's Locker" when referring to anyone who has been drowned or buried at sea.

The reason for the choice of name is unknown; it is certainly reminiscent of the prophet Jonah (also known as Jonas), who brought misfortune upon the crew of the ship in which he was fleeting to Tarshish to escape God's wrath. Another suggestion is that Davy is a corruption of the West Indian word duppy, devil, or that Davy Jones was once a pirate. Hampshire, in Just an Old Navy Custom (1979), states that Davy Jones is from "Duffy" Jones, duffy being an Old English word for ghost; the phrase thus means "ghost of Jonah." Source: An Ocean of Words: A Dictionary of Nautical Words and Phrases, by Peter D. Jeans; Birch Lane Press , 1998 A British Airways Concorde jet, renowned for its speed across the Atlantic, takes its final journey to be a part of the Intrepid Sea-Air-Space Museum in New York, where it will become part of a permanent new exhibit. The Concorde made aviation hi3tory as, the world's only supersonic passenger aircraft, cruising at more than twice the speed of sound, and at an altitude of up to 60,000 feet. The Concorde will be on display at the Intrepid Sea Air Space Museum in November 2003. The 204-ft. long, 88 ton supersonic jet will be placed on a 260-ft. barge, attached to the Intrepid Museum complex. Special features will be added to the barge including exhibit stations on supersonic flight and the history of the Concorde. The official opening of the Concorde exhibit will be in Spring 2004. The Concorde made it's last commercial flight from John F. Kennedy International Airport to London Heathrow Airport on Friday, Oct. 24, 2003. An aircraft is scheduled to be ferried back to JFK from London in the near future, and after a decommissioning process at JFK airport, the Concorde will be lifted onto a barge especially designed for the Museum exhibit.

The barge, which was once used by the National Aeronautics and Space Administration to transport Apollo Saturn 5 moon rockets, will make a historic trip past the Statue of Liberty, before docking at the Intrepid Sea Air Space Museum at 46th Street in Hudson River Park. For more information visit: www.intrepidmuseum.org. 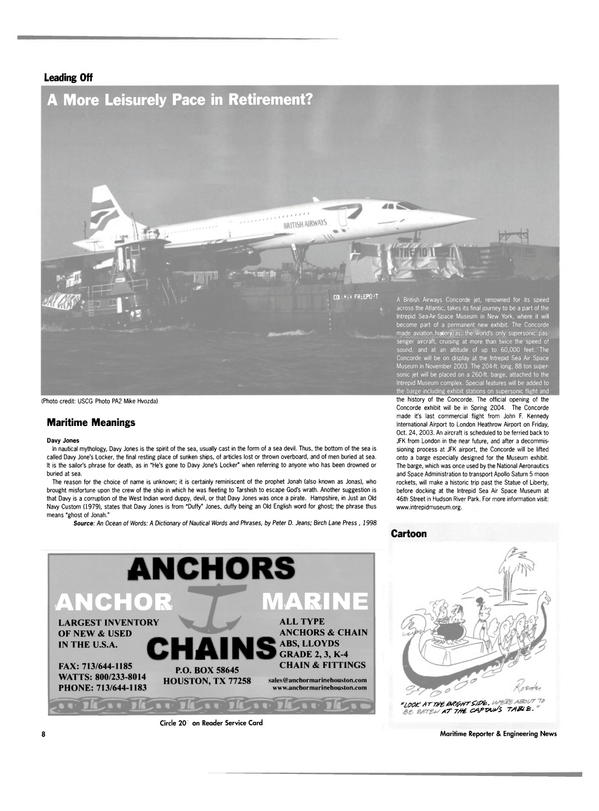