Techcrane Global Corporation is a Covington, La.-based marine crane manufacturer/distributor who recently installed Techcrane Model F250-100 onboard Torch Offshore L.L.C.'s Midnight Wrangler. This was a crane custom-designed for Torch with a maximum capacity of 125 tons at 30-ft.

reach. Time lapse between design conceptions to fabrication in Covington, La., was less than six months.

The bid was awarded to Techcrane in December of 2002 for delivery in mid 2003 and is a part of the project to convert the Midnight Wrangler into a deepwater pipelaying vessel. In order to accommodate these deepwater arenas, a winch was specially designed by Lantec on behalf of Techcrane for the F250 to handle 8,000 ft. of two-in. wire rope.

This winch is reeved with a single part line and lifts 60 metric tons on the top layer of the winch.

Other custom features include a stateof- the-art load sensing and payout measuring device retrofitted on the large hoist and electric motors powering the crane fitted with "Constant Tension" tugger system. "The crane was successfully load tested by using water weight of 88,000 lbs. at 90 ft. reach meeting the requirements of Torch," said Farhad Shad, president of Techcrane Global Corporation. The F250 has been in operation onboard the "Midnight Wrangler" in the Gulf of Mexico.

Working on the Caballo de Trabajo in the Bay of Campeci is Techcrane's T200 telescopic crane. This crane, constructed for Oceanographia and serving the oil company Pemex, "was the first of its kind in capacity," Shad said. 100 tons at 30 ft. reach telescopic crane using EBI's unique rack and pinion telescoping mechanism. Techcrane is currently in the midst of a design for a container handling crane to be used aboard ships. 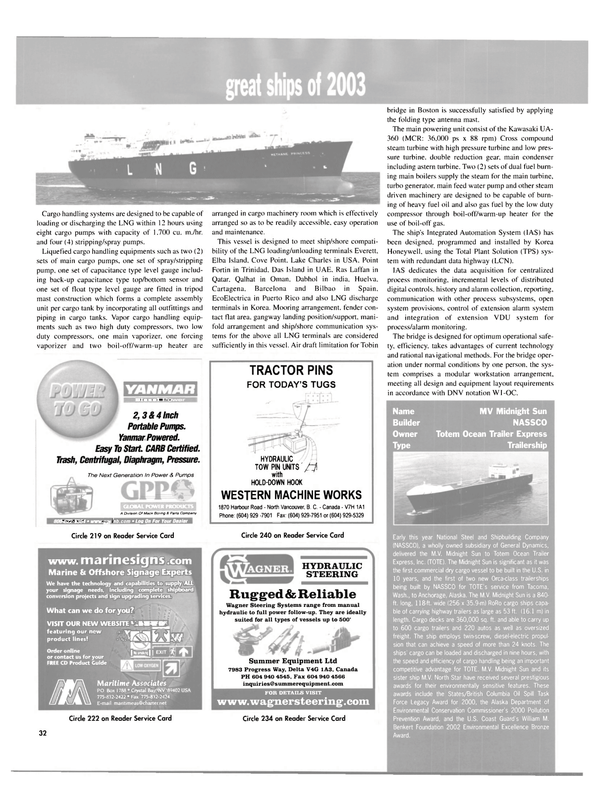