Lloyd Werft's Werner Liiken may not be too sure as to whether ship repair yards constitute "port facilities" under the ISPS Code but others do not share his doubts. Speaking at the Shiprepair Conference and Exhibition in London last month, he said he really didn't think that repair yards should be included under the Code's requirements and that newbuilding yards certainly shouldn't be. However, he admitted to being in ongoing discussions with the German authorities on the point and, as perhaps the world's most prominent cruiseship yard, there is a lot at stake. The arguments are complex and will keep lawyers busy for months. However, as Peter Rowat of the London Shipping Consultancy pointed out, whether or not repair facilities are covered by the Code's requirements is not really the issue. Repair yards simply cannot risk not complying with the Code's requirements.

Shipowners will simply not risk their vessels being delayed or turned away from U.S. ports and will insist that repair yards have appropriate security arrangements in place. And John Riding, MD of consultancy Marico Marine, pointed out that Declarations of Security, formal documents under the ISPS Code, will be requested and legally required by the masters of vessels in many instances. But to issue such a Document, repair yards will themselves need to have the core components of the ISPS Code in place. There was no positive conclusion to the debate except an agreement that the whole issue needs to be clarified pretty damn quickly. 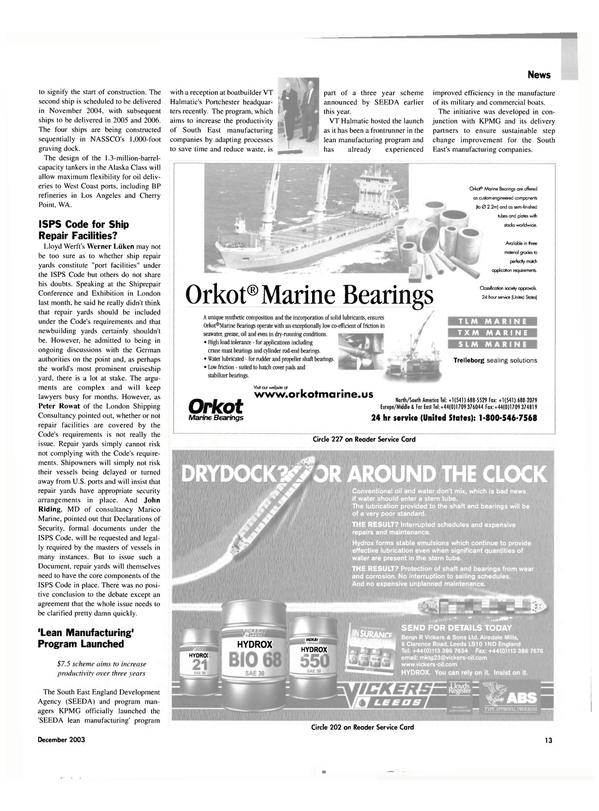