As ship owners globally face the eventual mandate to install ballast water management technology onboard their ships – a refit which is touted as the most expensive equipment refit ever – Maritime  Reporter & Engineering News in its February 2013 edition examines emerging Ballast Water Technologies for consideration.


Hyde produced its first system in 1999 and installed its first system on the M/S Coral Princess in 2003. The Hyde system was the first accepted into USCG STEP program in October of 2008. Hyde GUARDIAN has now been installed or specified on over 160 ships (200+ systems), and is most commonly found in use in the cruise, parcel tanker and container markets.
Hyde’s GUARDIAN features a two-stage process; stacked disk filtration to remove sediment and larger organisms, and a UV disinfection unit to kill or inactivate smaller plankton, bacteria and other pathogens. During ballasting, water is processed through both filter and UV stages. All captured solids and organisms are discharged during backflushing to the location they entered. During de-ballasting, the filter is bypassed and water flows only through the UV system before discharging overboard. Hyde GUARDIAN system and ballast operation data are automatically logged.
Hyde GUARDIAN uses a high intensity ultraviolet (UV) treatment as a means of disinfection. The UV chamber is designed for minimum pressure drop, maximum retention time, and compatibility with the marine operating environment. The medium pressure lamps produce a polychromatic output across the entire spectrum of the germicidal curve and have an expected service life of up to 8,000 hours.
The Hyde GUARDIAN Ballast Water Treatment Systems have IMO Type Approval for capacity from 60 to 6000 cu. m./hr., and a Type Approval Certificate has been issued by Lloyd’s Register on behalf of the UK Maritime and Coastguard Agency to confirm compliance with Guidelines contained in IMO resolution MEPC.174(58).  Other certifications include ABS, Dutch Flag State, Russian Maritime Registry of Shipping, DNV (Hazardous Area Certification) and DNV EC-Type Examination Certification.
www.hydemarine.com 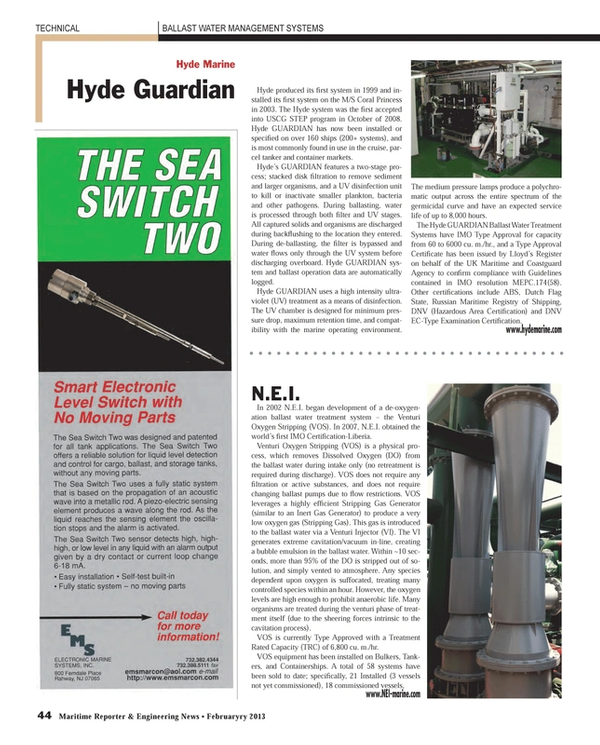