IRS to Leverage R&D for a New Dynamic Role

Attaining full membership of the International Association of Classification Societies (IACS) in 2010 appears to have opened a wider choice of opportunities for Indian Register of Shipping (IRS). Since Arun Sharma assumed charge as Chairman and Managing Director in February 2012, IRS has embarked on a trajectory of rapid expansion and growth, positioning itself in the new avatar of a solution provider for its clients, offering not just innovative solutions but assisting them with tailor made remedies for meeting their individual needs.
“Making a departure from its traditional role as a regulatory body, IRS is focused on a new approach,” said Mr. Sharma. “The traditional and primary role of Class will always remain - Safety of life and assets at sea, and protection and preservation of the marine environment. However, because of changing needs and demands of the industry, the role of Class also needs to change.”
IRS now seeks to provide services pertaining not only to Class but also those beyond Class. In short, it has taken upon itself the responsibility of being a solution provider to its clients, and will make all efforts to ensure that some, if not all of the solutions provided will be extremely innovative.
As a member of the International Association of Classification Societies (IACS), IRS is committed to reducing GHG emission and protecting the environment by reducing the carbon footprint according to Sharma. In this regard, he explains that the society has put its Research & Development (R&D) efforts into overdrive in order to focus on enhancing efficiency on all three fronts viz ship engine, hull and fuel – the last being for better recovery of waste heat energy.
“IRS is focused on creating innovative solutions and cashing in on emerging technologies for use by clients to the best advantage,” said Sharma. “These are being looked at by the R&D department internally. We are in constant touch with the industry in order to find out what our stakeholders want. Our R&D operates on two fronts. Firstly, it looks to improving the present systems and to coming up with new techniques and technologies that can be marketed. Secondly, it creates tailor-made solutions designed especially to meet the individual stakeholder’s needs. This innovative technology is on the top of our R&D agenda. In this regard, we have been recruiting senior people at different levels to boost our efforts and catch up with the demand from the trade.”
Having acknowledged and appreciated the efforts and achievements of IRS, the Government of India as well as other foreign Administrations have placed their trust and confidence in IRS often seeking its guidance and assistance.
IRS has also been getting much support and empowerment from the Indian Government in general and the Directorate General of Shipping (DGS) in particular on several matters. DGS has delegated several of its own functions to IRS and continues to add to this list. To mention a few, IRS has been made the sole authority in India for assigning Load Line,   sole authority for the International Ship and Port Facility Security (ISPS) Code and International Safety Management (ISM) Code.
The Government has also made IRS the sole authority for the Maritime Labor Convention (MLC) 2006. Since India has not ratified this Convention, IRS is issuing ‘Statement of Compliance’ so that ships are not subjected to PSC detentions. To date, IRS has already inspected 20 ships. Besides, IRS has also been appointed by Liberia, Marshall Islands and Sri Lanka for making similar certification.
“The Indian Administration has now authorized us to restructure the procedures for audits of Maritime Training Institutes,” informed an official of IRS. “As such IRS will be one of the organizations which will depute their representatives to inspect the various maritime institutes to determine whether these institutes meet the required standards in teaching engineering and nautical candidates or conduct various DG approved courses. In this regard, DGS examines the institutes through a set of appointed societies and IRS is one of them.”
It is heartening to note that the entire format for conducting the audits of maritime institutes has been developed by IRS and presented to the Indian Administration. IRS was also retained by the Government to frame the Indian Coastal Rules and these have recently been completed and submitted to DGS last month.
IRS’s singular achievement is being appointed as the Recognized Organization (RO) of 22 flag registries, which include Panama, Liberia, Marshall Islands besides India, the latest being Marshall Islands. All these 22 registries constitute 80 percent of the world fleet tonnage. IRS today has more than 1,700 vessels registered with it totaling about 11.0 million GT. Now that IRS has IACS membership the opportunities have improved significantly, it expects to see its growth mushroom.
Sharma said, “Our application for EU membership has already been forwarded through Bulgarian flag administration. EU has already initiated the process towards recognition of IRS.”
In conclusion, IRS firmly believes that as we move into time, the Class, the ship owning industry, shipyards and the flag states will need to work together in order to achieve the goals  set out more expeditiously. 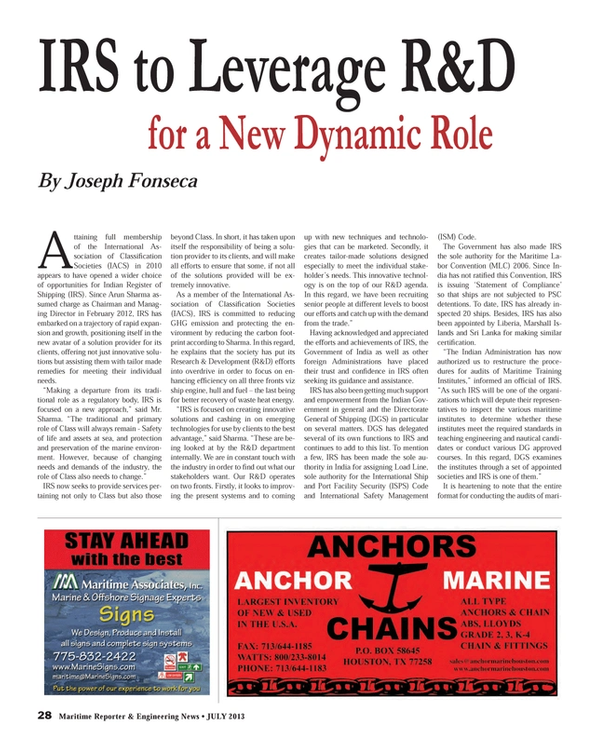 Read IRS to Leverage R&D for a New Dynamic Role in Pdf, Flash or Html5 edition of July 2013 Maritime Reporter