When TOTE Inc. ordered the world’s first LNG-powered containerships (which were honored last month in Oslo, winning the DNV-sponsored “Next Generation Ship Award”), industry excitement was palpable. For MAN Diesel & Turbo it served as a definitive launch point for its ME-GI Dual Fuel engine, which was soon followed with an order from Teekay LNG Partners to power a pair of LNG Carriers. MR had the opportunity to sit with Thomas S. Knudsen, SVP, Head of Marine Low Speed and CEO of Denmark, MAN Diesel & Turbo, to discuss the ubiquitous engine maker’s current position and future prospects in the LNG fueled market.

While the notion of LNG as fuel is hardly new in maritime circles, adoption is still relatively small but continues to gain steam in this and other industries as LNG helps to provide compliance with ever stringent environmental regulations, and a gives a tidy economic savings given the current price differential between LNG and traditional marine fuels.

While the environmental and economic promise of LNG is substantial, hurdles remain; specifically the ready availability of the fuel as well as a number of questions regarding the efficient handling of the fuel in the marine environment. “The big issue is the bunkering,” said Thomas S. Knudsen, SVP, Head of Marine Low Speed and CEO of Denmark, MAN Diesel & Turbo. “If a big containership comes, it will empty all of the bunkering facilities that we have in Europe: One big ship will empty it. Huge bunking facilities will have to be made in the harbor or via a lightering vessel. That is the big obstacle, and the reason the big container companies have not taken this up yet.”

With every passing day though, there is seemingly another announcement of a new order for LNG-fueled commercial vessels, helping to make the hurdles fall faster. “We have run this engine in Japan for 20,000 hours with excellent results,” said Knudsen. He was in the U.S. earlier this year to help further gauge the market potential, a potential driven in large part by the entering to force of the North American Emission Control Area (ECA) last August. “I see that we have a good business opportunity here in the U.S. This is the beginning of the boom in the LNG shipping here in the United States, and there is no doubt that this wave will continue in strength.”

Times, They are a Changin’ …

In addition to the North American ECA and tightening environmental regulations for ship emissions globally, another major driver for the push to LNG is the potential economic benefits due to the ever-increasing discovery and recovery of shale gas – driven by North America but felt globally.

North America, Asia, and South Africa are the shale gas resource leaders, and according to GL Noble Denton, the growth has been dramatic, with shale gas accounting for 1% of U.S. natural gas production in 2000; rising to 20% by 2010 and projected to increase to 46% by 2035. “In the old days, LNG carriers typically had a high boil off rate, so this fuel was considered free and nobody really discussed efficiency,” said Knudsen. But today LNG carriers have lowered the boil off rate and the fuel is no longer “free.” This, combined with the new discoveries and price differential between diesel and LNG has literally opened the door for what is broadly termed a revolution in marine power.

“From our side, the LNG Revolution is as similar as going from Coal to Diesel Engines. Of course the transition will take some time and it will be slow in the beginning,” Knudsen said. “But we believe that here in the U.S. that it will actually be very, very fast. But there is no doubt that this will revolutionize shipping.”

Another factor driving interest in the U.S. is the fact that gas prices fluctuate wildly on the global market, a factor that perhaps will stabilize as the shale-gas market matures and the U.S., as is expected, becomes a major net exporter of gas to global markets. “At the moment we do not have a global gas market,” Knudsen said. “The price level of gas, for example in Japan, is significantly higher than the price level of heavy fuel. But in the U.S. gas is cheaper than heavy fuel oil, and that will only increase the incentive to the ship owners to make this transformation.”

For any power plant manufacturer, a healthy R&D budget is essential not simply to prosper, but to survive. Legislative demands, much to the chagrin of the shipowning community, continues to drive innovation and expense across the entire maritime operation. Knudsen concurs: “It (new mandates) costs a hell of a lot of money. The new environmental rules account for more than 60% of our R&D effort.” But while shipowners continue to lament legislatively driven expenditures, Knudsen said that it doesn’t necessarily change the competitive field, as the rules are the same for all. Today, Knudsen said the company has an R&D department in Copenhagen numbering 200 strong, versus a crew of 40 when he started with the company. Predictably, a primary focus is developments in regards to Tier III engines.

“We have had massive investments and made many developments, so we are ready; but we need to test it and to prove that our design is without flaw.”

In addition to the newbuild market, Knudsen maintains that the demand for refits will be powerful as well. “You will not lose any efficiency and you will not lose any power (when refitting a diesel engine for LNG fuel),” Knudsen said. “Modification on the engine itself is relatively small.  The biggest part of the investment is the fuel tanks and the fuel supply system.”  Generally speaking, the size of the LNG fuel tanks are three times the size of the tanks on a similarly powered diesel engine ship, and building space for the larger tanks is one of the most important considerations for both the refit and the newbuild setors.

ME GI: The Time is Now

One of MAN Diesel & Turbo’s oldest licensees held a demonstration of the ME-GI concept on April 17, 2013 at its Tamano works, where guest viewed the engine and were able to listen to the company’s leadership – specifically MAN Diesel & Turbo’s Dr. René Umlauft, CEO, and Thomas Knudsen spoke to describe the impact of the new engine on the marketplace.

“Dual-fuel engines are tailored perfectly to these demands,” said Dr. Umlauft. “When operated in gas mode, CO2 and nitric oxide emissions are markedly reduced, while sulfur oxides, soot and particle emissions are virtually non-existent. Additionally, dual-fuel engines give ship owners and operators tremendous flexibility and cost-efficiency, since the fuel can be changed based on its availability and price.”

Knudsen spoke of his pride in the result of many years of joint effort between Mitsui and MAN Diesel & Turbo and also referenced the first GI engine that was developed in Tamano and later entered service, producing electricity for the Tokyo area. He called the demonstration of the 6S70ME-C-GI engine another visible sign of the high entrepreneurship and innovative capability of Mitsui.

“With this technology, Mitsui and MAN Diesel & Turbo will be able to supply the most environmentally friendly and most economical propulsion plants for not only LNG carriers but also VLCCs, container ships, RoRo ships, bulkers and other ship types,” Knudsen said. The ME-GI technology is a traditional two-stroke engine technology that can be maintained and overhauled by chief engineers already capable of maintaining existing two-stroke engines.
Unveiled in May 2011, the ME-GI engine is designed to give shipowners and operators the option of using either HFO or gas – predominantly natural gas but also LPG and methane.

Mitsui is the second MAN Diesel & Turbo two-stroke licensee to demonstrate the ME-GI concept after Hyundai did so in Korea in November 2012. Shortly afterwards, TOTE ordered two 8L70ME-GI engines to power two 3,100 TEU newbuilding container ships, with an option for three additional vessels. That announcement officially designated as ME-C-GI (M-type, Electronically Controlled, GI for Gas Injection) in the MAN Diesel & Turbo low-speed portfolio. The following month, MAN Diesel & Turbo was able to confirm the successful introduction of the ME-GI to the market with the announcement of another order when Teekay LNG Partners L.P. (Teekay LNG), an offshoot of Teekay Corporation, the international shipping group, placed an order for two LNG carriers powered by 2 × 2 5G70ME-GI engines, including an option for three further ships. 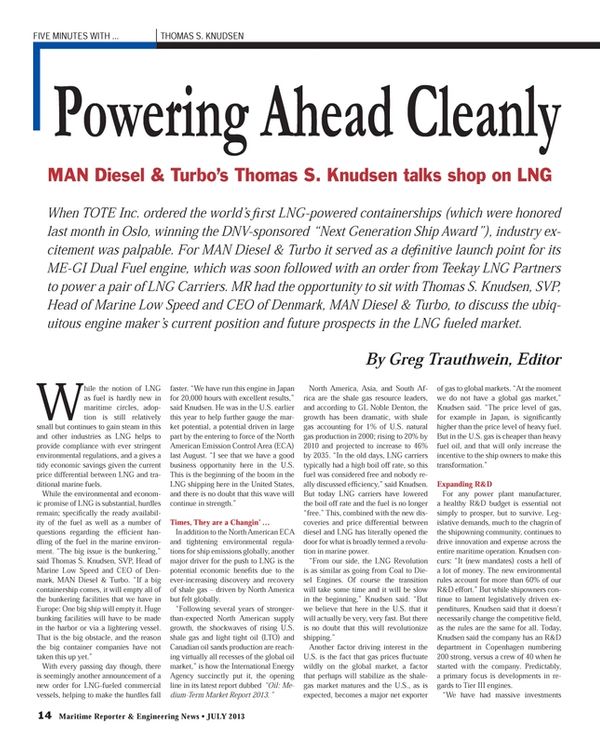