As underwater radiated noise levels in the oceans increases, MARIN has investigated just how much cavitating propellers are to blame.

Traditionally, underwater radiated noise is mainly of interest for naval vessels and fishery research ships. Nowadays, however, there is a growing concern that marine life is affected by the rise in background noise levels in the oceans. Marine mammals and fish use sound to communicate and to sense their environment and this requires low background noise levels. The rise in noise levels is being caused by an increase in shipping, among other factors. Therefore, the EU has included underwater radiated noise emanating from shipping in the methodological standards for a healthy marine environment.
There is, however, a lack of knowledge about the actual noise levels produced by (merchant) ships, although it is known that one of the dominant noise sources is the cavitating propeller. The EU FP7 Suppression Of underwater Noise Induced by Cavitation (SONIC) project aimed to assess and mitigate the impact of shipping noise on the marine environment. MARIN, which was the coordinator of the project, focused on the further development and application of computational and experimental tools to predict propeller cavitation noise and on generating ship traffic data for noise maps based on Automatic Identification System (AIS) data. The SONIC project was funded by the 7th Framework Program of the European Commission and ran between 2012 and 2015.
A variety of methods can be used to predict underwater radiated noise from cavitating propellers. The computational procedures used by MARIN in the SONIC project rely on a potential flow method (PROCAL) for predicting the propeller loading and the sheet cavitation dynamics. Different semi-empirical methods use this input to predict the underwater noise due to tip vortex cavitation and sheet cavitation. A full RANS-based method for noise prediction using the Ffowcs Williams-Hawkings acoustic analogy is also in development but it was too early to use it for this project.
A cruise ship, container vessel and small research catamaran were computationally analyzed. Good agreement was obtained with available full scale data of the cruise ship and catamaran, whereby the data for the catamaran was obtained in the SONIC project. For the containership a comparison was made with data from model tests performed by HSVA (Hamburg, Germany) and these also gave an acceptable agreement.
In the first phase of the project, measurements were performed in MARIN’s Depressurised Wave Basin to determine the influence of reverberations at low frequencies. A simple correction procedure for this influence was developed and validated. For the catamaran MARIN performed hull pressure and underwater noise measurements using the silent towing carriage in the basin for a range of ship speeds. The cavitation pattern of the propellers at the highest speed is shown in Figure 1. The results of the model-scale measurements were close to the full-scale data.
MARIN also contributed to the development of a methodology to generate noise maps based on AIS. Each (large) ship continuously transmits AIS data, including its identification, position, course and speed. To compute the noise levels in an area within a certain time frame the AIS-data is combined with mathematical models for ship noise and noise propagation that also take into account bathymetry. A noise map is created by weighted averaging of the calculated noise levels over depth and frequency, an example is shown in Figure 2. Different marine species are affected by different noise frequencies, therefore the noise maps can be created for different frequencies. This type of maps can be used to investigate the influence of noise mitigation measures for the shipping industry as a whole. The final noise maps were generated by the Dutch research organization TNO.
Within the SONIC project MARIN has shown that propeller cavitation noise can be predicted well but more validation data for a wider range of ship types is needed. Results from the SONIC consortium and the EU FP7 ‘Achieve QUieter Oceans by shipping noise footprint reduction’ (AQUO) consortium are summarised in a common guidelines document for regulation, which is publicly available from the SONIC website. An early assessment of whether the propeller design meets noise requirements - as for instance, defined by DNV-GL’s ‘Silent Class’ - can be made using computations and model tests. See www.sonic-project.eu for more information.
The Author
Frans Hendrik Lafeber is Team Leader Analysis & Prediction Ships at MARIN, the Maritime Research Institute Netherlands. MARIN offers simulation, model testing, full-scale measurements and training programs, to the shipbuilding and offshore industry and governments. For more information:
e. [email protected]
w. www.marin.nl
(As published in the September 2016 edition of Maritime Reporter & Engineering News) 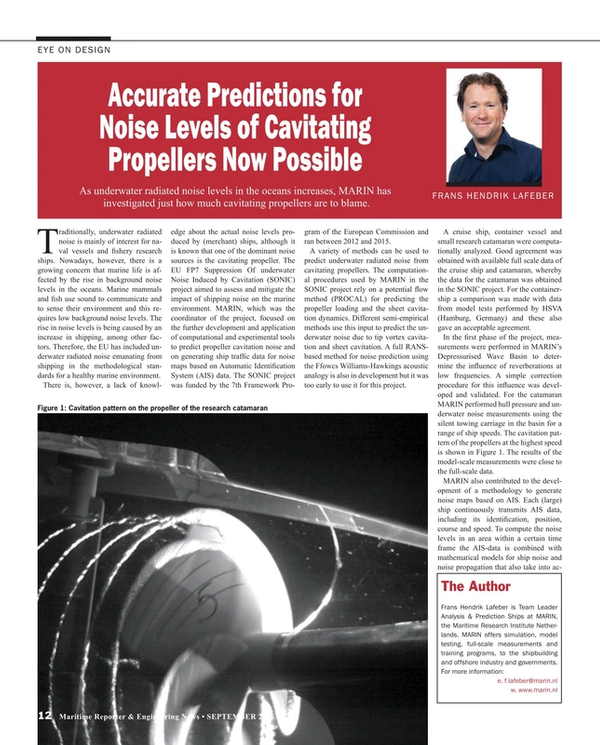