Anthropogenic (manmade) sound is creating havoc among marine mammals and other aquatic species. These creatures have very sensitive hearing, which they rely on to find food and mates and (for some) to communicate and navigate. Sound waves can travel much further and with much less loss of strength in water than in air. In pre-industrial times, the oceans were relatively quiet. Sailing ships generated almost no subsurface noise. A whale’s call could be heard by another whale hundreds of miles away in ambient conditions. The substantial and growing amount and volume of anthropogenic noise in the ocean comes from a variety of sources including commercial and naval shipping, fishing, recreational craft, sonar, seismic surveying, blasting, and marine construction. Due to the volume or energy levels at which sonars and seismic surveys (such as air guns) generate their sounds, these sources seem to have the greatest immediate impact on marine mammals. Other manmade sounds, though, have long-term impacts. Cavitation from ships’ propellers now generate a ubiquitous level of noise in the ocean that can oftentimes mask natural sounds.

IMO
In 2012, the IMO adopted and made mandatory the Noise Code so as to reduce the level of noise exposure to individuals on commercial ships. The Noise Code had been preceded by noise guidelines. The Noise Code applies to new construction and the guidelines address conditions on existing vessels.
In 2009, an IMO Correspondence Group, chaired by the United States, submitted an extensive report on noise from commercial shipping and its adverse impact on marine life. In 2014, the IMO Marine Environment Protection Committee (MEPC) approved guidelines for the reduction of underwater noise from commercial shipping to address adverse impacts on marine life.
These guidelines focus on the primary sources of underwater noise – those associated with propellers, hull form, onboard machinery, and operational aspects. They recognize that much, if not most, of that noise is caused by propeller cavitation. The guidelines also recognize that the largest opportunities for reduction of underwater noise will be during the initial design stage, but noise reduction is still possible for existing vessels, particularly on the occasions of propeller replacement and hull work, such as installation of a bulbous bow.
NOAA
Recently, the National Oceanic and Atmospheric Administration (NOAA) published an extensive technical guide for assessing the effects of anthropogenic sound on marine mammal hearing. For decades NOAA has been conducting analysis of the sources and impacts of manmade noise in the ocean. Those studies as well as numerous others from different sources reveal that the impact of manmade noise on marine mammals and other aquatic life is pervasive.
A wide-ranging NOAA report on anthropogenic noise in the marine environment, written in 2000, contains a detailed analysis of the sources of manmade noise in the ocean and its effects on marine mammals, marine fishes, and other taxa (sea turtles, flora, invertebrates, and birds). It notes that ‘quiet ship’ technology has been developed but is not widely used by the commercial sector. That may be about to change. NOAA is developing a plan for reducing anthropogenic noise in the ocean that includes proposals for rulemaking to require reductions in noise-making activities. Noise from some of these activities, such as marine construction projects, is currently regulated through the Marine Mammal Protection Act and its requirement for incidental harassment authorizations prior to commencement of projects that may result in the ‘taking’ of marine mammals. This requirement has not previously been imposed on commercial shipping.
The plan under development reportedly will call for developing noise limits for a variety of sources. Regulations could build on the 2014 IMO underwater noise guidelines and set design requirements for new construction, with limited retrofit measures for existing ships. Hopefully, any such steps would be coordinated worldwide through the IMO negotiation process.
Geographic Approach
More immediate, though somewhat geographically limited, steps could be taken in the same manner as is currently done with the critically endangered North Atlantic right whale (NARW). If supported by adequate data, which does not currently exist, underwater noise standards could be established for various sections of US waters, based on the presence of certain marine life, particularly marine mammals. Ships would then be prohibited from transiting those waters while generating underwater noise above the designated level. This could force either speed reductions or the adoption of noise-reducing technologies. While any unilateral approach adopted may be enforceable within internal waters and the territorial sea, enforcement of underwater noise restrictions against foreign vessels outside the territorial sea would be problematical without IMO cooperation. The IMO in 1998 adopted a mandatory ship reporting system requested by the US government for ships transiting through waters off the east coast of the United States so as to reduce the risk of those ships striking NARWs. Subsequently, the IMO adopted or adjusted Traffic Separation Schemes (TSS) in these same waters so as to improve NARW protections. If presented with sufficient evidence and justification, the IMO may well support a mandatory underwater noise reduction measure.
The marine industry should not wait to have external bodies impose potentially unrealistic standards on its operations. Rather, it should be proactive in the examination, development, and adoption of realistic measures to reduce underwater noise generation by ships. Owners should require that their new ships be designed to incorporate ‘quiet ship’ technology. Remember that it takes energy to generate noise. The less noise that a ship generates, the more efficiently it will be operating.
The Author
Dennis L. Bryant is with Bryant’s Maritime Consulting, and a regular contributor to Maritime Reporter & Engineering News as well as online at MaritimeProfessional.com.
t: 1 352 692 5493
e: [email protected]
(As published in the September 2016 edition of Maritime Reporter & Engineering News) 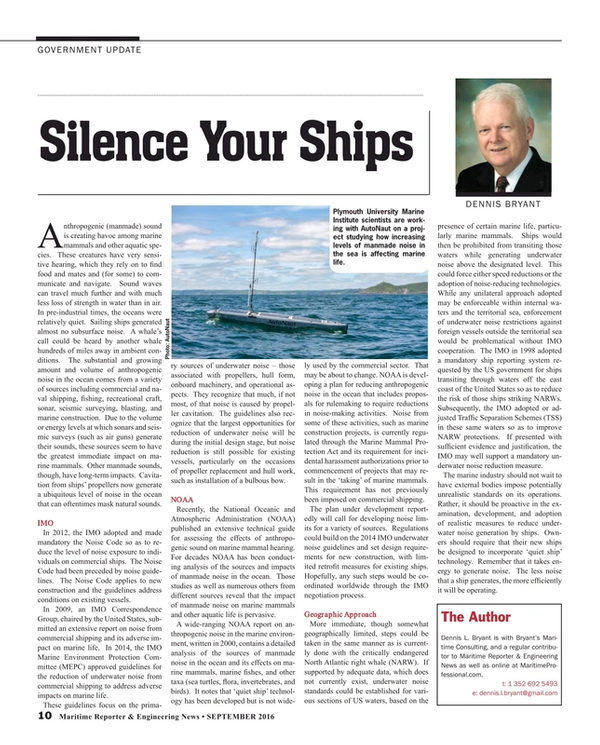