The Art of Navigation

There are countless examples of how an over reliance of GPS navigation and the electronic charting systems, as well as the use of dead reckoning without a known fixed starting point – instead “eyeballing” the situation – are leading vessels in to danger.

August 21, 2017 was the Great American Eclipse, and the science fiction fantasy fan in me wondered if this is when I would get my superpowers back. The navigator in me pondered if I was in the zone of totality and took a sight of the sun and moon, at the moment of totality would it count as two lines of position on my chart. As I sat in the park and watched some clouds pass by, I was curious if I would see the eclipse at all. Luckily I did, but sadly no superpowers were awakened.
The event reminded me of recent conversations on how navigators and sailors of the past were better than modern mariners at reading the weather and computing navigation sights, a sentiment echoed by former instructors and contemporaries. Many owners, however, have proven reluctant to spend money on simple pieces of equipment required to get and keep these skills. Sextants, chronometers, magnetic compasses, nautical almanacs and sight tables all prove to be such a burden on owners that I realized the only way to convince them was to show the value of such purchases: “Prudent mariners will not rely solely on any single aid to navigation” is in almost every notice to mariners.
STCW Table II/1 specifies that a Navigation officer is to be able to determine their position and compass errors by use of celestial navigation. As any deck officer worth their salt knows, this is a skill that comes with practice and is maintained through even more practice. The problem is complacency. Although the general maritime public is aware of the problems caused by GPS spoofing, many refuse to acknowledge that celestial navigation is a suitable alternative means of navigation. SOLAS, Chapter V, Regulation 19 no longer requires the carriage of a sextant and a chronometer. These do however, fall in to the alternative means of navigation that every vessel is supposed to carry. In recent history that alternative meant Radio Direction Finders or LORAN. However with the discontinuation of LORAN in the U.S., and only a smattering of LORAN in Europe, the only truly alternative means of navigation are celestial and piloting, neither of which is dependent upon the GPS. Independence from the little magic box a
ccomplishes two things: first, you have a secondary means of knowing your location should that box fail; second, officers are using their hard-learned skills and keeping sharp as navigators.
My recent vacation on board a popular cruise ship here in NYC surprised me greatly. After speaking with the captain I learned that the Navigation Officers could not even use a sextant on the bridge, instead required to go one deck up since the bridge wing is completely enclosed. The often leaves gyro corrections to the occasional amplitude, verification by range, and comparison to the GPS.
One example of improper navigation is the case of the freighter Roger Blough on May 27, 2016 in Gros Cap Reefs, Sault Sainte Marie, Ontario, Canada. The final NTSB determination is that the officer of the watch did not use all available means to determine the position of the vessel, and Roger Bloug ran aground while trying to overtake another vessel on the port side. Had they used alternate means of position finding, it may have been realized that the vessel was in actuality already outside of the channel, as the NTSB report stated that the marking buoys were off station at the time.
The watch officer failed to have another navigation officer on the bridge at the time, which was company policy. Although the ECDIS was on, it was not being monitored. Additionally the watch officer was “looking out the windows” it is not evident that any bearings, running bearings, or range and bearings were done as a method of determining position.
Another example is the use of the depth finder for navigation. On May 4, 2013 the harbor tug Kaleen McAllister ran aground in NY during a simple undocking and getting underway procedure, a routine procedure done many times by the mate and the captain. The captain always proceded along the most cautious route, while this mate did not, and this transit was in between a dolphin and collapsed pier.
There are countless examples of how an over reliance of GPS navigation and the electronic charting systems, as well as the use of dead reckoning without a known fixed starting point – instead “eyeballing” the situation – are leading vessels in to danger.
What can be done to remedy the situation?
Part of the problem is one of industry culture. As an industry we must remember to reinforce the use of skills and hone them over years of practice. Looking quickly at a screen to see where you will be in 30 seconds or 2 minutes does not take much effort. But it also allows the navigator and their watch team to become complacent. Master’s should be monitoring how the vessels are being navigated and ensure that watch officers are doing their jobs properly.
Companies should institute policies to internally review navigation and vessel handling, and not simply to save time and money. Through review of voyage plans and their implementation, possible hazardous scenarios and trends can be caught early before a problem arises.
From Chapter 1 of Bowditch : “ The science of Navigation can be taught, but the art of navigation must be developed from experience. “
The Author
Matthew Bonvento is the Senior Manager for Safety, Security, Regulatory, and Quality Compliance for Vanuatu Maritime Services Ltd. He is also a licensing instructor in Long Island. Holding a Masters in International Transportation Management, and an Unlimited Chief Officers License as well as a 1600 ton Master license.
(As published in the September 2017 edition of Maritime Reporter & Engineering News) 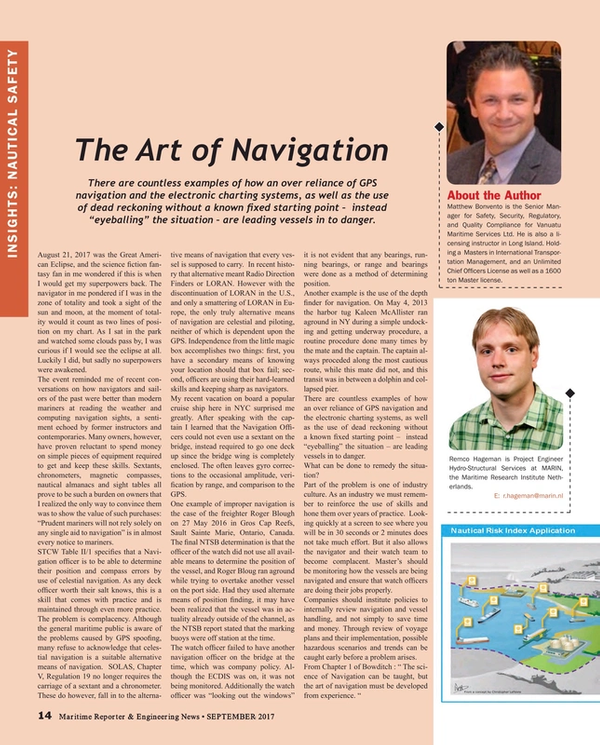 Read The Art of Navigation in Pdf, Flash or Html5 edition of September 2017 Maritime Reporter