Satisfaction in overall powertrain reliability often comes down to individual components, starting with the gearbox and gear wheels. To this end C. u. W Keller GmbH & Co.KG, has made investment in its products and processes – $41 million over the last 15 years – to ensure that it remains a strong link in the propulsion chain. Keller’s experience in gear wheels and gearbox that spans more than 100 years, with marine applications added to the line-up 18 years ago. In nearly two decades Keller has found success in the maritime sector, getting its start with the repair of marine gearboxes for the dredging industry. This experience led to its first own-designed gear units for fishing and small cargo vessels, and soon thereafter Keller was contracted to supply a 2,200 mm diameter gear wheel for the hopper dredger Lange Wapper for DEME. The gear wheel had to be supplied quickly as the vessel was laid up in Hong Kong following its gearbox breakdown. Keller supplied the gear wheel in five weeks, leading to inquiries from other major dredging companies.
Since that initial job, Keller has gained strong market share in the demanding dredger sector, supplying some 300 gearboxes for 120 dredging vessels.
Investment Strategy
Between 2007 – 2009 Keller bought several new production machines, including a mill for the machining of gearbox housings up to a weight of approximately 100,000 kg and reportedly the largest gear grinder in Germany for gears up to 4,150 mm in diameter.
A second investment wave came in 2015, where among other things a gear cutting machine was installed for gears up to 4,700 mm in diameter.
But the investment didn’t come solely in the form of plants and machines, as Keller saw the need for specialist engineers with experience in marine applications, which included new hires as well as training of existing staff.
Quality of gear design and manufacture is core to the Keller brand, from project inception to final commissioning, and an essential component of the quality control is conveyed to the final test run when drive and gear mechanisms are put through their paces. Support images of the gear toothing are taken and these are then compared with the calculations; the noises and vibrations are measured and the transmission tightness verified. In addition, the bearing temperatures are recorded over a period of several hours.
Testing is especially critical for dredging applications, as certain dredge applications look very simple but are actually complex with effects reaching every other component in the chain. For example, in addition to the classic bearing, shaft and interlocking calculation, comprehensive research has sometimes to be carried out on the deformation and stress behaviour of shafts and the gear-casing structure using FEM. This will be conducted with the aim of optimizing the casing structure due to the immense and additional changing loads that can occur during the dredging process.
Burgeoning Dredger Biz
Keller supplied gearboxes for the largest hopper dredger ever build in the Netherlands, the Vox Maxima for Dutch dredging company van Oord, a dredger with two propulsion 15,000 kW gearboxes, each with a generator PTO of 10,000 kW. In 2015 Keller received a purchase order for the supply of a 5000 kW cutter gearbox for the largest cutter ever built in China, the Tian Kun of TDC. With the delivery of the gearboxes, Keller also supplied the complete electrical monitoring control system of the gearboxes. In 2016 Keller was selected by the Belgium dredging company DEME as the supplier of the majority of the gearboxes for the largest cutter suction dredger in the world, Spartacus, reportedly the largest gearbox in the dredging industry.
(As published in the October 2017 edition of Maritime Reporter & Engineering News) 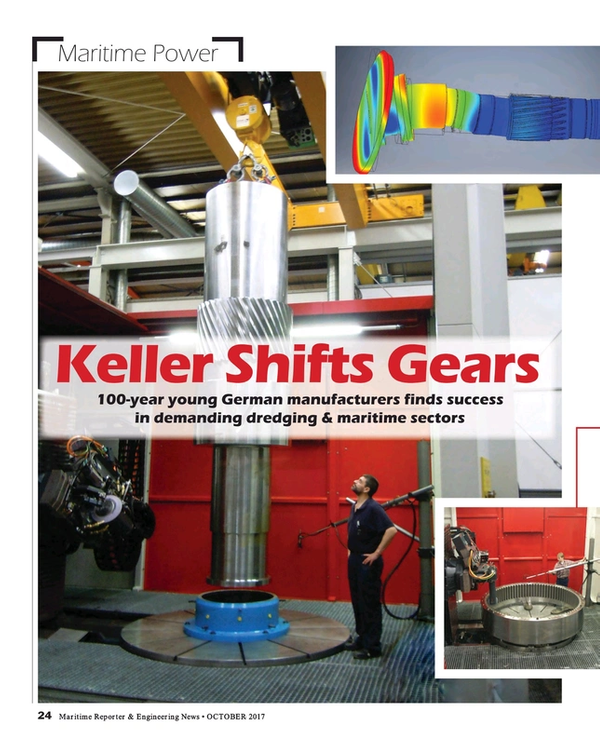