Serious questions have been raised regarding the testing of ballast water management systems (BWMSs). In order for a BWMS manufacturer to sell its equipment for use on commercial vessels operating in U.S. waters, the equipment must be tested in accordance with U.S. Coast Guard and Environmental Protection Agency (EPA) requirements and the equipment must then obtain a type approval certificate from the Coast Guard. To date, type approval certificates have been issued to six manufacturers and others are in the pipeline.

In accordance with Coast Guard regulations, the testing must be performed at independent laboratories (ILs) that meet Coast Guard requirements. There were, until December 6, 2017, five ILs available for this evaluation, inspection and testing work. On that date, Dr. Mario Tamburri and the University of Maryland Center for Environmental Science (UMCES) withdrew the Maritime Environment Resource Center (MERC) from the program, citing the need to maintain scientific integrity.
Dr. Tamburri is a respected biologist and marine scientist and has been a leader in ballast water management issues for many years.
UMCES is concerned that the BWMS certification testing, as currently conducted, is not scientifically sound, predictive, consistent and transparent. While there are written regulations and formal protocols that govern the testing, questions have arisen regarding various specific testing procedures.
According to Dr. Tamburri, the Coast Guard personnel involved in the program have formally and informally provided different answers to different laboratories via ex parte meetings, telephone calls, emails and written letters, resulting in dramatically inconsistent approaches at the various laboratories. Because this guidance has not been shared with all of the approved ILs, the process is no longer rigorous, consistent and transparent. The Coast Guard has conceded that there are shortcomings in its BWMS certification testing and approval process. Questions raised over time by the various ILs and answered informally by the Coast Guard include:
Some of these questions might seem esoteric to the uninitiated, but different answers to the same question can result in a particular BWMS passing or failing its certification test. It is important that, to the maximum extent practicable, the test results at one approved IL be consistent with the test results at any other approved IL.
I do not personally know if the issues raised by Dr. Tamburri have substance. I can say, though, that an agency such as the Coast Guard administering an important program such as this should not be having ex parte contact with individual program participants on substantive issues at which the agency provides guidance to the participant. The proper procedure is for the agency to listen to all concerns; formulate uniform direction or guidance in house; and then share that direction or guidance with all participants equally, thereby maintaining a level playing field.
I can envision how this situation, if it exists, could have happened. This is a complex program with many moving parts and many participants within the agency. Someone calls from one of the ILs and asks “what does it mean in the regulation where it says _____?” The recipient of the call (possibly a mechanical engineer), trying to be helpful and understanding the issue from that person’s perspective, answers the question and then turns his or her attention to a totally different matter, not recording the question or the answer. Later, someone from a different IL sends an email to a different Coast Guard individual (possibly a marine chemist) about the same issue but approaching it differently, asking “as regards ______, is it OK if we do this?” This second individual also answers the question, but the answer is not the same as it was to the first question because the questions were presented differently and the individuals answering the questions approached the issue from their own perspectives. Neither
Coast Guard individual tried to mislead the questioner and the answers were correct within the bounds of the Coast Guard individual’s understanding of the issue. The problem is that the recipients of the answers could now innocently adopt different methodologies for the same portion of the BWMS certification testing.
This fundamental issue arises on a regular basis in the Coast Guard. It has field offices all around the country. Mariners and other stakeholders contact those field offices on an almost daily basis seeking guidance. Eventually, it happens that the answer received from one field office is not the same as received from another field office. When the issue is inevitably elevated to Headquarters, it gets staffed and researched.
A considered approach is developed and approved. At that point guidance put in the form of perhaps a policy letter or Navigation and Vessel Inspection Circular (NVIC) is disseminated to all field offices and shared with the public. Thereafter, all interested parties are (or should be) aware of how the Coast Guard will view a particular matter. This is somewhat similar to a notice and comment rulemaking.
The sooner a difference of approach between two or more Coast Guard field offices or individuals on a substantive matter is discovered, the sooner a unified approach can be developed. Assuming that this is what has occurred with regard to BWMS certification testing procedures, it appears to be time to match pointers and develop an agreed and unified approach going forward. This is too important an issue to be left to chance. As I said above, Dr. Tamburri is a respected scientist and has raised issues that must be taken seriously by both the Coast Guard and the maritime community.
The Author
Dennis L. Bryant is with Bryant’s Maritime Consulting, and a regular contributor to Maritime Reporter & Engineering News as well as online at MaritimeProfessional.com.
(As published in the January 2018 edition of Maritime Reporter & Engineering News) 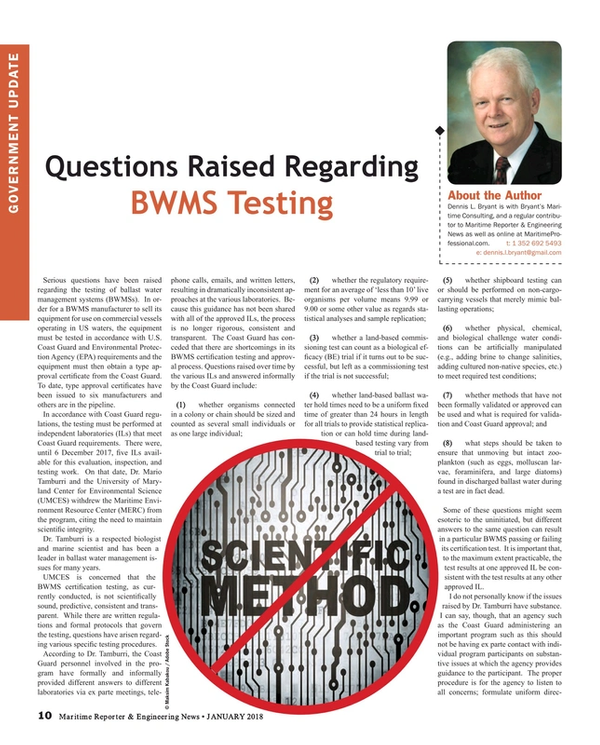