Admiral Schultz Emphasizes Maritime as a Driver of U.S. Commerce

Last month Maritime Reporter & Engineering News was invited to join Admiral Karl Schultz, the Commandant of the United States Coast Guard, on a trek to New Orleans for an underway tour on board a mid-stream transfer operation in the Mississippi River. As the U.S. inland waterway system has endured historic water levels for more than six months, the destination provided a perfect backdrop to discuss several key messages coming from USCG leadership: the maritime industry’s critical role in facilitating U.S. commerce; the need for investment in Coast Guard and maritime infrastructure to keep that commerce flowing; and the importance of collaboration between government and industry on the national, regional and local levels.

Numbers don’t lie, and a quick ‘by the numbers’ look at the U.S. maritime industry is enlightening: 95,000 miles of shoreline, 25,000 miles of navigable channels, 361 ports, 50,000 federal aids to navigation, cumulatively support more than 30 million jobs and $5.4 trillion in economic activity.

The United States is a maritime nation, yet when it comes to transportation and infrastructure spending it could be argued that maritime is the Rodney Dangerfield of the transport sector, as compared to road, rail and air, maritime it doesn’t get due respect.

Admiral Karl Schultz, the 26th Commandant of the United States Coast Guard, is on a mission to change that.

Now nearly a year in the top job, Admiral Schultz – starting with the “Maritime Commerce Strategic Outlook” released in October 2018 and continuing to and through a recent day trip to New Orleans for a discussion with local maritime, port, logistics and government stakeholders along a unique and  critical maritime corridor – is determined to inextricably link the health and welfare of the U.S. economy to the safety and efficiency of its waterways.

“We are committed to the Maritime Commerce Strategic Outlook as a 10-year plan to raise the visibility of the importance of the Coast Guard to our nation’s commerce and economic prosperity,” said Admiral Schultz. “When it comes to conversation about infrastructure, the Coast Guard needs to be a part of that conversation,” noting that, for example, the Coast Guard’s fleet of 35 river tenders averages 52 years old.

“The average citizen doesn’t necessarily worry about the maritime industry, the ports and the trades, they don’t worry because they say ‘I get all of my stuff at Walmart’. Well guess what? Ninety percent of it comes via the maritime transportation system through the ports,” said Admiral Schultz. “I think it’s important to have the conversation that links $5.4 trillion in annual commerce to the marine industry. And I think it’s important to have the conversation in government that when you talk about investment in infrastructure, maritime infrastructure and the Coast Guard need to be a part of that conversation and a part of the equation.” 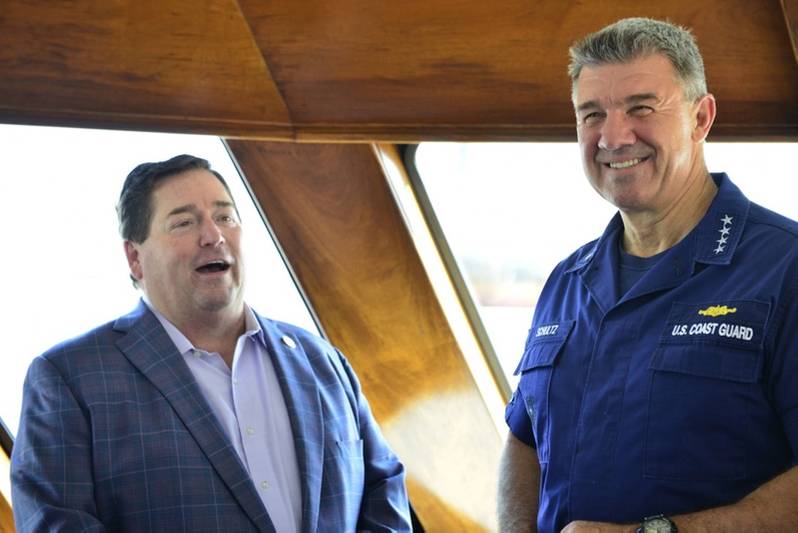 Admiral Karl Schultz, Commandant, USCG discussing the situation on the Lower Mississippi River with Lt. Governor Billy Nungesser – State of Louisiana. Photo by Petty Officer 3rd Class Alexandria PrestonFrom Brown to Blue
Anyone who has been to New Orleans knows the unique nature of the place and the culture, and it stands out too in terms of the maritime infrastructure. It is the literal crossroad where brown water and blue water meet, a critical corridor transporting energy supplies and an estimated 80 percent of the country’s farm products from inland states to global markets.

The Port of New Orleans is a vibrant and growing multi-modal port which ranks second among U.S. ports in total tons of cargo (127.6 million tons) and number 10 in terms of value of cargo ($59.7 billion).

A unique characteristic of this area is its’ ability to conduct mid-streaming cargo operations, a system which unloads barges traveling from up-river states to blue water ships anchored in the river, helping to save time and money versus traditional dock and load systems. While the recent record high waters and rapid currents have slowed operations by Associated Terminals, the stevedoring company, and Turn Services, the maritime company, cargo operations have continued; an impressive workflow as barge-mounted high-tech cranes transfer cargo to a literal conveyor belt of barges.

With all of its impressive facilities, systems and personnel, the region, like the rest of the maritime world, is at the mercy of Mother Nature, and in the past six months conditions locally – and in fact throughout the entire Mississippi River system – have been severely challenged by the weather.

Since December of 2018 the Mississippi River system has endured historic high waters and flooding, conditions that slow the efficiency of commerce on the waterways and increase the risk of maritime operations.

“(Today) I saw a unique, once in an almost 100 years circumstance in regards to the water levels on the river,” said Admiral Schultz. “The stakeholders in the 8th Coast Guard district (the largest Coast Guard district in the country encompassing 28 states) are used to dealing with the high water and the low water, but this is historic.”

The high water impacts all levels of operations due to the higher flow rates and increased risk of accidents due to severe currents hampering the ability for industry to safely get their goods to market. The historic flooding has also shut down parts of the river system preventing farmers from shipping their commodities down river. It is a strain on an aging system and infrastructure has global impacts for delivery of goods in a just-in-time economy.

“Down here it’s a system of systems, with the port, the service companies (Turn), there are a lot of stakeholders in the region including the government, from Coast Guard to the USACE,” said Admiral Schultz. “The system really needs everyone to bring their best to the game when there’s an elevated risk posture. This goes from the mouth of the Mississippi all the way up to the Great Lakes. It’s a national situation.” 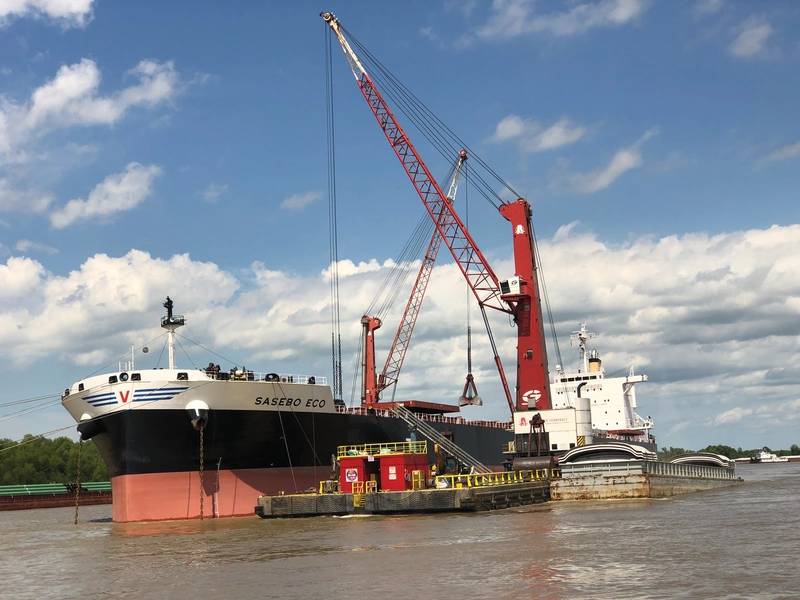 Associated Terminals & Turn Services run an impressive mid-stream cargo transfer operation in the Mississippi River. Historically high waters and swift currents in this critical waterway challenge the speed, efficiency and safety of all river-borne operations. Photo: Greg Trauthwein
“Technically Smart People are Central”
In helping to maintain $5.4 trillion in commerce flowing on the waterways, Admiral Schultz knows that his Coast Guard must strive to cultivate and keep the best-of-the-best beyond the five-year service obligation coming out of the Coast Guard Academy, and he counts staying relevant to the next generation as another challenge and area of intense focus.

“Think about automated ships and facilities. With those automated ships and facilities comes risk, technical and cyber risk. With all of the technology comes increased vulnerability,” said Admiral Schultz. “We’re building out our cyber capability at the Coast Guard. I have about 300 positions today on cyber at the Coast Guard, and the 2020 budget has about another 60 bodies as we have to defend Coast Guard networks from attack and we have to bring a cyber regulatory face to the waterfront. We need to build our own technical experts in this area.”

To that end there is a new cyber major at the Coast Guard Academy, with the class of 2022 being the first with graduates with a cyber degree.

“After their five-year commitment from the academy is over, though, I can’t afford for all these young people to jump ship” for higher paying jobs in the private sector, said Admiral Schultz. Here, and in the case of other groups with unique skill sets, he maintains that the Coast Guard must “think differently and be flexible,” citing how the DoD is bringing in people with unique skill sets but no military experience and immediately elevating them in rank.  “Maybe the Coast Guard has to do that too,” said Admiral Schultz.

While cyber security is an obvious point of focus, Admiral Schultz said that the evolution of technology in the maritime sector – from autonomous ships to dealing with different commodities (LNG & LPG, for example) require expertise within the Coast Guard to regulate. “We have to generate and re-generate expertise, we have to make people feel valued and want to stay as part of the brand,” said Admiral Schultz. “Technically smart people are central.”

USCG is Investing in Ships and Boats
“The Coast Guard is building ships. We’re planning to build 25 Offshore Patrol Cutters, we’re still building Fast Response Cutters, we’re building National Security Cutters, we’re positioned to start building Waterways Commerce Cutters and now we’re building Polar Security Cutters,” said Admiral Karl Schultz. “We’ve never been building five classes of cutters (simultaneously) in my 36 years here; it’s a banner time and we have to keep the capital funding stable and predictable, and we need more “cow bell” with respect to operating funds for readiness issues and people initiatives.”
In keeping with his mission to steer the Coast Guard conversation towards its relevance in $5.4 trillion in commerce, the previous hodgepodge of river and construction tenders, a fleet that averages 52 years old, is being rebranded as the Waterways Commerce Cutters.
“The good news is we’re recapitalizing our fleets, it’s a good news story for U.S. shipbuilding,” said Admiral Schultz. “The U.S. Coast Guard has to be in the infrastructure conversation.”

A Capable Coast Guard
“I want a Ready, Responsive and Relevant Coast Guard. Whether it’s an act of nature or a terrorist attack, the Coast Guard has to be ready to respond. It’s about being trained and prepared. It’s having capable leadership across the regions. We put empowered leaders in the field that build collaborative relationships in the field. As Thad Allen said, ‘we must be jurisdictionally multilingual,’ meaning we are able to talk the National Security Agency (NSA) as easily as we do the local sheriff, and we can make them all feel that they are contributing to the maritime challenges of the nation.” 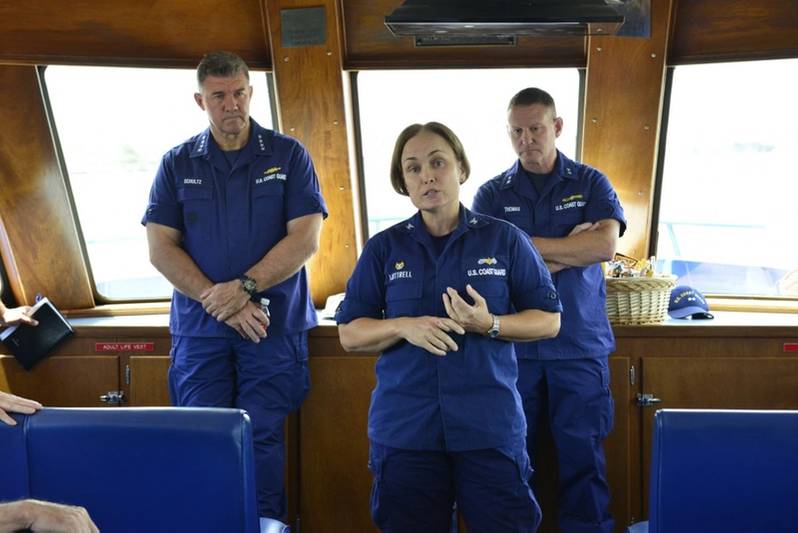 From L to R: Admiral Karl Schultz, Commandant, USCG; Captain Kristi Luttrell, Sector New Orleans Commander, and RADM Paul Thomas – Eighth District Commander. Photo by Petty Officer 3rd Class Alexandria PrestonOn his job
“I am honored to represent the men and women of the Coast Guard. I find it incredibly rewarding to talk to the men and women of the Coast Guard about the job they’re doing. As their service chief I have a solemn obligation to advocate to put the right capabilities in their hands. For me the takeaway is we have tremendous men and women in the Coast Guard, they have choices and I want to be an employer of choice.”

On the New Icebreaker(s)
“We have the 6-3-1 strategy (to acquire them). We’re getting the one, we have the funding and we’re off to the races. Now we’re having the broader conversation about six (icebreakers—at least three of which will be Polar Security Cutters). I’m excited to talk about the necessary capacity to operate in the high latitudes. It is absolutely essential to our national interests.”

On Funding
“We do about a billion dollars worth of work in support of DoD combatant commanders around the globe, and I’m still funded at the same level for that work that the service was in 2001 ($340 million). 18 years without an increase. I’d like to see that funding number move closer the level of contribution.”

On Regulation & Collaboration
“I like to think of us as a “common sense regulator”; we rely on partnerships, and within those partnerships you have to try to be a voice of reason. I get the sense from industry that we are using common sense. Being a regulator and being a good partner is not mutually exclusive. It’s helpful for the regulatory agency to have a good relationship with the industry it regulates. Are there disagreements? Yes. But I think you can work through a lot of issues using common sense and forward thinking.” 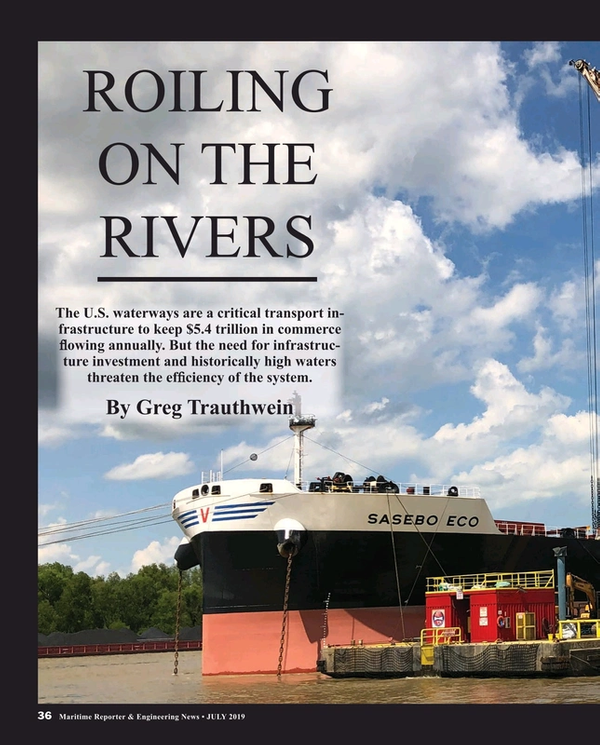