Every day we see more and more news about how the planning for new offshore wind projects continues to expand with the increasing investment from both domestic and foreign interests in these projects.  This is resulting in both developers and contractors making logistics plans to secure vessels and crew for the purposes of meeting the demands necessary to crew and operate vessels in support of future wind farm operations.

Unfortunately, there are challenges associated with the evolving federal regulatory regime that are developing with this nascent industry facing both U.S.- and foreign-flag vessel owners and operators related to the crewing of such vessels.  Despite universal federal agency support for offshore wind farms, due to the varying ways in which federal agencies are applying crewing laws and the Outer Continental Shelf Lands Act (OCSLA) to offshore wind farms, this is resulting in a different regime in many ways compared to how these laws have been applied over the years to oil and gas projects on the Outer Continental Shelf (OCS).  The following is a discussion of these challenges.

With regard to foreign-flag vessels, as a general rule, under OCSLA, vessels engaged in “OCS activities” must use U.S. citizens to crew such vessels.  However, there is an exemption procedure available under OCSLA which allows foreign-flag vessels that are over 50% foreign owned or controlled by foreign citizens to engage in U.S. OCS activities using foreign crew members.  A formal application to the Coast Guard is required to obtain such an exemption.  Upon approval of the exemption, the foreign citizen crew members will be able to obtain a B-1 (OCS) visa from a U.S. embassy in order to allow them off the vessel in the United States, or travel to the United States, to meet a vessel.  Crew members are not able to obtain the B-1 (OCS) visa until the Coast Guard exemption letter is issued.

Unfortunately, the Coast Guard will not grant an OCS crewing exemption to a foreign-flag vessel engaged in offshore wind farm operations because it has determined that the crewing restrictions under OCSLA only apply to the employment of personnel on units engaged in an “OCS activity” on the U.S. OCS.  This term is defined by the Coast Guard to mean “any offshore activity associated with the exploration for, or development or production of, the minerals of the OCS.”  The definition of “minerals” has been interpreted by the U.S. Coast Guard to not include wind.

However, an analysis of the statutory authority reveals that the Coast Guard’s interpretation is incorrect.  Neither the U.S. citizen manning requirement nor the exemption procedure for this requirement limits its mandate to mineral activities.  Indeed, the specific authorization that gives BOEM the authority to approve the development and construction of a wind energy project on the OCS, is authorized pursuant to a 2005 amendment to OCSLA, to specifically expand this authority beyond the production of oil and gas on the OCS.  Similarly, OCSLA also authorizes the Coast Guard to regulate the health and safety of workers and facilities offshore without distinguishing between projects that produce minerals or other energy.  However, we understand that the Coast Guard takes the position that it does not have the authority to regulate an offshore wind farm under this provision because it is not an activity related to the minerals of the seabed.

Accordingly, a vessel engaged in wind operations on the OCS is not subject to the OCSLA crewing restrictions and can employ foreign citizens without obtaining a crewing exemption from the Coast Guard.  The problem with this outcome is that the foreign crew member cannot obtain a B-1 (OCS) which has a six-month maximum stay period.  One would think that the next most logical option given the Coast Guard’s position would be a D-Visa.  Such a visa option, however, creates a conundrum because the crew members performing wind farm related work on such a vessel must depart the United States within (29) days which is not a long enough time to complete a typical wind farm project offshore.

Indeed, this problem is further exacerbated when an individual applies for a visa at a U.S. embassy for offshore wind farm work on the OCS.

Embassies expect that a person applying for a visa for OCS work will possess a Coast Guard crewing exemption letter and as a result some embassies are refusing to issue a B-1 visa to the applicant.  As a result, the Coast Guard’s interpretation is causing confusion with regard to the need for crew members to obtain a B visa (without an OCS annotation) to be issued by a U.S. embassy.  We believe a B-type visa is the appropriate visa to issue in these circumstances which would provide crew members with the time needed to complete a wind farm project on the U.S. OCS.

This development is also causing confusion with regard to how U.S. Customs and Border Protect (“CBP”) officials make U.S. entry decisions when a crew member receives a visa and arrives at an airport or on a wind farm project on the OCS.  The representative for the local CBP port director is confused because typically they are used to seeing a crew member arrive with a B-1 (OCS) visa for energy related work on the OCS.  Accordingly, this is also resulting in uncertainty in how visa rules will be interpreted by local CBP officials.

Fortunately, as a result of these developments, we understand discussions with relevant Coast Guard, CBP, and State Department officials in Washington D.C. have recently been taking place which hopefully will result in new approaches and agency coordination on the proper policy on issuing B-1 visas to crewmen who will work on offshore wind projects on the U.S. OCS.

With regard to U.S.-flag vessels, absent some exceptions, the officers and unlicensed seamen crew aboard a U.S.-flag vessel must be U.S. citizens.  It has not been uncommon in the past for companies to place persons aboard a U.S.-flag vessel to perform special operations that U.S. citizens could not perform.  However, the Coast Guard interprets the term "seaman" broadly to mean any individual engaged or employed in the business of a vessel or a person whose efforts contribute to accomplishing the vessel's business, whether that person is involved with operation of the vessel.  Accordingly, individuals being compensated for performing their jobs while the vessel is underway are considered seamen for the purpose of applying citizenship requirements.  However, the Coast Guard does not consider a person who is briefly visiting the vessel in a consulting capacity, or shoreside personnel who come on board vessels while they are not underway to load or unload cargo, or to perform services such as maintenance of shipboard equipment, to be a crew member.  In summary, in the Coast Guard’s view only a foreign citizen that fits the description of a “consultant” can perform services aboard a U.S.-flag vessel.

There is also a new issue with regard to who must possess a Merchant Mariner Credential (“MMC”) when employed aboard a U.S. flag vessel.  In general, individuals serving aboard vessels of at least 100 GT must have an MMC, with certain exceptions. In short, under the law, unless otherwise excepted, an MMC is issued to qualified mariners and is required for any person “engaged or employed” on board a vessel of 100 GT or over.  The term “engaged or employed” is very broad.

Certainly, the navigation and marine crew of a vessel possess should and do possess MMDs.  However, typically other personnel serving aboard a vessel do not necessarily possess an MMD.  This is particularly the case with regard to many operations taking place offshore related to energy development on the OCS.  Many industrial-type personnel currently do not possess MMCs.

Despite the fact that this law has been on the book for decades, it appears that the Coast Guard is taking a more aggressive stance and there have been some incidents recently in which the Coast Guard has started to enforce this requirement. Accordingly, absent a change in the law, there could be more circumstances arising in which vessel owners or operators may not be able to operate their U.S.-flag vessels unless everyone who is employed or engaged on the vessel possesses an MMC. 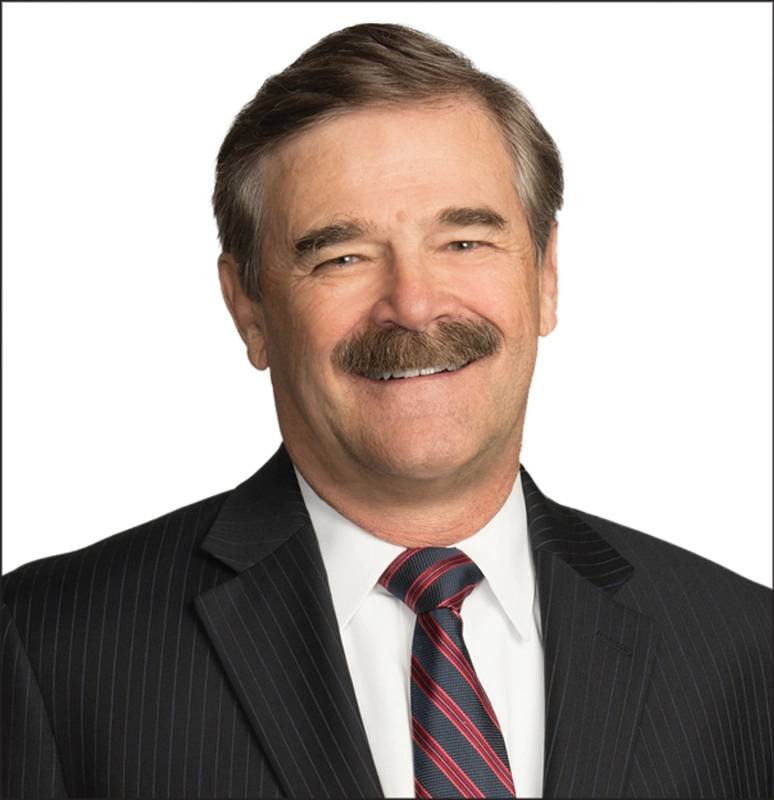 Jonathan K. Waldron is a partner in the Blank Rome's Washington, D.C., office who concentrates his practice in maritime, international and environmental law, including maritime security. He served in the U.S. Coast Guard for 20 years, attaining the rank of commander, and was senior counsel to the Marine Spill Response Corporation. 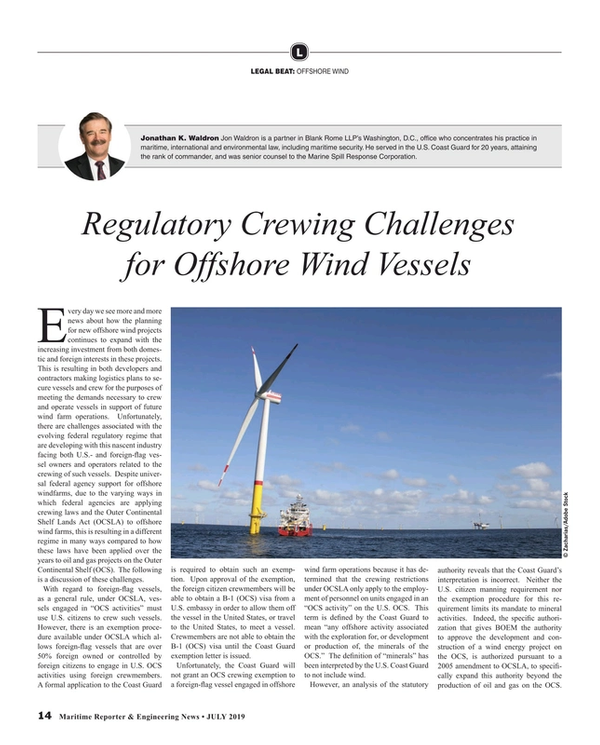