The Panama Canal is a strategic crossroads for maritime traffic, and is arguably one of the most important maritime developments in the past century. Here we take a deeper dive into the history behind that famous strip of waterway.

The present canal, which saw its first vessel transits in 1914, along with possible alternatives through Nicaragua and Mexico, had actually been on the minds of merchants, explorers and military/political strategists since the Age of Exploration in early 1500’s.  The precursor to the actual Canal was a railway across the Isthmus, conceived in the 1830s but actually built in the 1850s; the impetus for its construction, and an important attraction to its financial backers, was the California Gold Rush of the late 1840s.

Shares in the Pacific Mail Steamship Company (benefiting from U.S. government contracts) flourished. The stock price for railroad and mail steamer shares boomed. The year 1869 was a pivotal year, events elsewhere loomed large. In North America, the trans-Continental Railroad was completed that year, which drastically cut into cross-Panama rail traffic (prompting a collapse of the railroad’s stock price). Nearly half a world away, the Suez Canal, linking the Mediterranean with the Indian Ocean, was completed, reviving thoughts of a canal linking the Atlantic and Pacific. Coming off their successes in Egypt with a sea level canal, the French canal builders tried a similar design in Panama, which was then a part of Colombia.

With more difficult topography (with the Continental Divide) and the tropical conditions (giving rise to disease), the investor backed French effort failed. The United States, a burgeoning power, picked up the pieces starting in the 1880s; eventually buying out the French company (which had acquired the defunct railroad along the way). After the Spanish American war of 1898 (and lengthy voyages around Cape Horn for U.S. naval vessels stationed in California), geopolitical considerations dominated the landscape. Panama  broke free from Colombia (with some American help) in 1903. When the dust settled, the U.S. controlled a 10-mile swatch of territory across the Isthmus, i.e. the Canal Zone. Military considerations influenced the design of the original canal. The Panama Canal Authority’s history of the pre-construction phase notes: “At the request of the U.S. Navy, locks chambers were enlarged from 95 to 110 feet to accommodate vessels then on the drawing board.”

Concerns about Canal security, and redundancy in the event of military activity, drove an effort at Canal expansion, in the early 1940s, with dredging actually begun on a third set of locks suitable for battleships on the drawing board (but never actually built). This work, subsequently abandoned in 1942 (with World War II underway), was not in vain; it provided a head start on dredging at the new Pacific locks.

The U.S. merchant marine flourished in parallel with the U.S. expansive military might, climaxing in the late 1940s and into the 1950s, years predating the rise of intermodalism and the U.S. highway network- both of which began to take shape in the mid-1950s. Imports of steel from Asia and Europe were in nascent stages. Long gone names Isthmian Lines (established by then powerhouse U.S. Steel prior to the Canal’s opening) later amalgamated with States Marine regularly transported steel from the East Coast mills through the Canal, returning with general cargo, or with nitrates. Calmar Steamship, formed by competitor Bethlehem Steel, in response to Isthmian’s freight cost advantages, and Lykes Lines took steel outbound, and lumber from the Pacific Northwest, back to ports in the Gulf and Atlantic. Transits by other well known, but long gone, U.S. carriers including Grace Line, Great White Fleet, Farrell Lines (also with ties, originally, to U.S. Steel) and Pacific Panama Line, were commonplace.

In 1979, the U.S. and Panama agreed that the Canal Zone would be handed over to Panama at the end of 1999.  For the maritime business, the trends towards larger vessels meant that major trades were bypassing Panama; with then maximum dimensions for vessels of approximately 960 x 105 ft. with a 39 ft. draft. 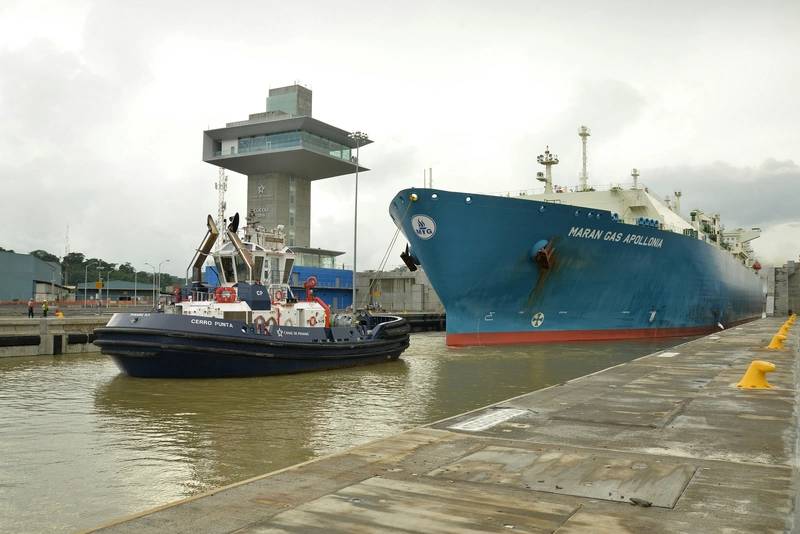 In 2007, after much study and a nationwide vote, Panama decided to go ahead with the massive expansion project, and vessels with dimensions of  1,200 x 161 ft. with a 49 ft. draft are now able to transit utilizing newly constructed locks and widened entrances on the Atlantic and Pacific sides. As a result both the containership and LNG trades have enjoyed dramatic, positive impacts.

With the expanded Canal finally opened in 2016. Drewry, a leading maritime consultant, wrote at the time, “The new set of locks at the Panama Canal opened for business on 26 June and it was the fittingly renamed Cosco Shipping Panama (9,472 teu) that won the draw to be the first ship through the widened canal, sailing westwards. Five days later, in the opposite direction and reportedly paying a toll fee of some $830,000, the 10,000 TEU MOL Benefactor was the first neo-Panamax unit to perform a commercial transit through the canal enroute for a berth slot at New York on 8 July, where she would become the largest containership the port has been asked to handle in its history.”

Drewry added, in the same report, “Without doubt, the ability of the canal to handle much larger ships is a groundbreaking event and heralds a new era in which a large swathe of US importers will have a much wider choice of options routing goods from the Far East. However, it will not all change overnight – the migration of seaborne cargo from the West Coast to the East Coast will continue to be a steady evolution.” The consultants also pointed to shifts in Liner alliances’ routing dynamics, commenting that: “New alliance service networks for Asia- ECNA favour the Panama Canal routing ahead of the Suez Canal.”

The Canal widening coincided with sea changes in LNG moves; with the first U.S. LNG exports moving out of Sabine Pass in early 2016. By 2019, multiple export facilities had already come online, with additional LNG trains to follow. U.S. Department of Energy data reveals exports of 840 cargoes through June 2019, with top recipients including South Korea (#1, with 144 cargos), Japan (#3 with 74 cargos), China (#4 with 65 cargos) and Chile (#5 with 46 cargos). When smaller off-takers are considered, more than 40% of U.S. LNG export liftings were to Pacific Rim receivers.
The new locks have had little impact on conventional dry bulk and tanker trades. On the dry side, larger Capesize vessels, laden with Brazilian ore, are too deep to transit the Canal.  Brokers at Poten & Partners, writing in a mid-2018 Tanker Opinion piece (two years after the expansion), said that “So far, crude oil tankers make up only 3% of the total transits.”  Many of these have movements have been repositioning voyages, as Poten explained that “… more than half of the transits were for oil tankers travelling in ballast…” typically after discharging on the U.S. West Coast and moving towards Caribbean load ports.  The Canal has not been a factor in the burgeoning U.S. crude oil export trades (which began in late 2015); these move on Very Large Crude Carriers (VLCCs), like the big ore carriers, they are  far too big for the Canal.

IMO2020, impacting all aspects of shipping, has the potential to bring about a backslide in the East Coast’s traffic gains. Joshua Hurwitz, Senior Consultant at port designer firm Moffaft & Nichol has made the case that increased fuel costs due to IMO2020 could prompt 1.2 million TEUs inbound to the U.S. to swing back to West Coast discharge, with shorter transit times from Asian ports.

Trans-shipment terminals on both the Atlantic and Pacific sides have grown into mega cargo handlers; Hutchinson Whampoa, through its Panama Ports Company (both sides) and SSA Marine (Atlantic side), are leading terminal operators. Trans-shipments along the coasts were 7 million TEUs in 2017, according to Georgia Tech Panama Logistic Innovation and Research Center. The railroad across the Isthmus, which had been effectively abandoned, has been rekindled, part of a “Logistics Platform” (as termed by the eminent geography professor Jean-Paul Rodrigue)  as a link for trans-shipping containers between Colon (on the Atlantic side) and Balboa (on the Pacific).

In 1998, just prior to the handover of the Canal to the Panamanians, the U.S. based Kansas City Southern railroad (NYSE- “KSU”) along with Mi-Jack, a leading producer of rubber tired gantry cranes (RTGs) and provider of intermodal terminal services to the major railroads ( through what is now called ITS Conglobal ), was granted a 50 year concession to operate the railroad, following an investment of $80 million. Railroad container traffic across the Isthmus, a closely guarded number, was reported to be 400,000 TEUs in 2014.

Panama Canal Authority, now deriving a large proportion of its toll revenues from the container trades ($2.5 billion total in 2018, of which 159 mm out of total 441 mm Panama Canal Universal Measurement System or PC/UMS tons, were from container vessels), has seen economics and change with the times. In 1965, in the already waning glory days of its merchant marine, U.S. flagged vessels transits numbered 1678; decades later, 126 U.S. registered vessels made the transit in 2018. But old patterns linger. In early 2017, the first tug barge transit through the widened Canal saw New Orleans-based Tradewinds Towing’s tug Hollywood pulling a beamy barge westbound from the Gulf of Mexico to the U.S. West Coast.

Any look at history always begs the question of what’s ahead. The ACP told Maritime Reporter & Engineering News that “The Panama Canal, always considering the competitiveness of the waterway, included the possibility of a Fourth Set of Locks in designing the Third Set of Locks, should additional access later be required due to demand from the global maritime industry to grow further.  If this need does arise, the Panama Canal will conduct in-depth analyses of current and future demand, as well as water sources. Currently, the Panama Canal has no immediate plans to execute a fourth set of locks.” 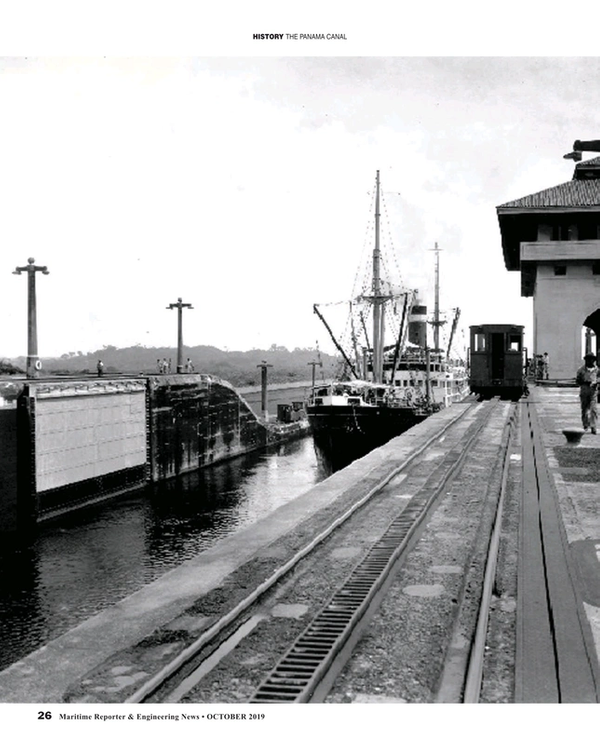