The Emerging U.S. Offshore Wind Industry in a Post-COVID-19 World

By Thomas H. Belknap, Jr. and Lauren B. Wilgus

Join a webinar on June 17, 2020 for the global release of a major new market study on the depth, breadth and growth prospects of the Offshore Wind Market --  https://zoom.us/webinar/register/WN_UR5uY1boTOKdAAcAXDbR4g

Just when it was looking like the offshore wind industry was finally about to take off in the United States, the COVID-19 pandemic has introduced one more significant layer of uncertainty upon an already very complicated playing field. There are currently 15 active offshore wind projects in the planning stages which, if completed, could add approximately 25 gigawatts of electricity to the power grid.

The State of Play

Things were hard enough already. Cape Wind, the United States’ first – and very ambitious – 130 turbine offshore wind project, died under its own weight after years-long delays caused its energy providers to end power supply contracts for the project in 2015. Indeed, just one project – the five-turbine (30 megawatt) Deepwater Wind farm off Block Island – is up and running so far. But, there are a slew of other projects in the pipeline. The two-turbine (12 megawatt) Coastal Virginia Offshore Wind facility – a “test” construction in advance of the planned 2,640-megawatt Dominion Energy Wind Farm – has already started construction and reportedly remains largely on schedule.

Several other large projects are in the pipeline to start construction within the next two to three years. The 800-megawatt Vineyard Wind 1 project in Massachusetts was initially scheduled to commence last year until federal regulators determined they needed more time to analyze environmental impacts before they would issue the necessary permit. Recently, the Department of Energy’s Bureau of Ocean Management has indicated it will issue its findings by December 2020, setting that project back at least a couple of years from their initial projections. Since the new analysis will require a consideration of the potential “cumulative” environmental impact if other offshore windfarms are built, this delay is likely to cascade to other projects.

Revolution Wind, a 704-megawatt project off the coast of Connecticut and Rhode Island targeted for completion by 2023, has announced delays of their own, also due to permitting issues and effects of the COVID-19 pandemic. Other large projects are facing similar delays.

Among other problems, the delays have jeopardized the projects’ access to federal tax credit and investment tax credits. Originally expiring in 2019, the credits were extended for one year to include facilities that begin construction within 2020. The credits can be claimed where a project is placed into service within four years of starting construction – a timetable that may be increasingly challenging due to COVID-19-related delays. Recently, the Treasury Department has signaled to Congress that they will be looking at possible modifications to this rule.

So what does all this mean for the maritime sector? Offshore wind has been tantalizing the industry for years now, and it’s no wonder why. The American Wind Energy Association predicts that the offshore wind projects could create up to 83,000 jobs and $25 billion in annual economic output by 2030. Already, the AWEA reports, companies have announced well over a billion dollars in port-related infrastructure, transmission infrastructure, manufacturing facilities and supply chain development.

Meanwhile, in other parts of the world, offshore wind development and infrastructure is already well developed, particularly in places like northern Europe where the first offshore wind farm was erected in 1991. Unsurprisingly, many companies from those markets are looking closely at the United States as a major new opportunity, and not just for the installations, but also for design, fabrication, consulting, service and maintenance, and every other aspect of this specialized work. And they are right to do so, for there remains a shortage of expertise in the United States when it comes to offshore wind projects, and experienced companies will have much to offer in this new market.

Of course, the United States – and the various states in which these projects are located – are quite different in many respects, and local knowledge is a must for any company who aims to enter a local market. Foreign companies looking to take advantage of these new attractive opportunities should consider several factors before doing so.

Many foreign companies have started to develop a U.S. presence or open a local office. Beyond the strategic considerations of where to open relative to where the work and the clients are located, such a decision of course also requires proper due diligence to ensure compliance with U.S. real estate, tax, employment, regulatory, immigration and environmental laws. Foreign wind energy companies also must ensure compliance with U.S. statutes and regulations, including U.S. anti-corruption laws, such as the Foreign Corrupt Practices Act, U.S. trade and investment sanctions, and anti-money laundering law, among others.

Obviously, for any company looking to enter this space, vessel operations are a central factor in nearly all aspects of this work. The installation and maintenance of offshore wind farms require personnel and equipment which must be transported on vessels to and from offshore sites. Certainly, the Jones Act and other U.S. offshore regulations will likely present the most important constraint for the operation of installation, support and maintenance vessels in U.S. waters, as most vessels employed in the offshore wind sector must be Jones Act-compliant as well as properly certified and built to classification standards. Equally, with the Jones Act comes U.S. citizen crewing requirements for U.S. flagged vessels, which will make it more difficult to find crew experienced with these kinds of operations. Importantly, the Jones Act does not preclude foreign companies – or even, necessarily, foreign vessels – from performing all work in this space, including some heavylift and construction on the outer-continental shelf. But, it does impose significant limitations that need to be anticipated and accounted for in any business plan. Moreover, this is a politically charged topic, and there are several movements afoot to try to change these laws and regulations in potentially material ways, so this will need to be continuously monitored.

While the U.S. offshore wind industry is in its infancy, we do have a well-developed offshore oil and gas industry, particularly in the U.S. Gulf. Much of the “oil patch” vessel work has been fixed on the widely used time charter SUPPLYTIME 2005 form. However, because that form was intended for the oil and gas industry, it required extensive amendments to fit the needs of the offshore-wind sector.

In 2013, BIMCO released a specialized time charter party called WINDTIME, primarily designed to cover vessels used in the transfer of personnel and equipment to and from offshore wind farm installations. Among other changes to the SUPPLYTIME 2005 form, WINDTIME clarified the details and mechanics of the standard termination clause, contained an update of the knock-for-knock and consequential losses clauses, eliminates confusing “cargo” clauses that rarely are applicable in the supply vessel context, clarifies the exclusion of consequential damages, and establishes a mechanism for a monetary cap on liability. Following the success of WINDTIME, BIMCO made several revisions to the standard SUPPLYTIME form and a few years ago released SUPPLYTIME 2017, which updated and addressed key weaknesses in the 2005 form.

Because WINDTIME is modelled on the SUPPLYTIME form, many of the clauses are nearly identical. However, several important provisions in SUPPLYTIME and WINDTIME are not aligned, and caution should be taken to ensure that the form being used meets the needs for which it is being applied.

In addition to selecting the correct form, the parties should ensure appropriate amendments are made to cover particular risks and issues that may arise and to align it to the needs of the parties. For example, because U.S. federal maritime law differs from state law – and because state law can vary in important respects from state to state – selecting the applicable law to govern the contract is critical, as the parties may have different and perhaps more favorable rights under federal maritime law than they would have under state law. This is particularly important when considering the scope and enforceability of contractual provisions – such as knock-for-knock clauses, by which each party assumes the risk of loss or injury of its own property and employees, which varies from state to state. For instance, whereas the U.S. federal maritime law generally recognizes and enforces knock-for-knock indemnity clauses, New York state law contains a provision in its General Obligations Law that invalidates knock-for-knock provisions in certain kinds of construction contracts.

Dispute resolution is another important consideration that is often overlooked. Historically, many maritime disputes are submitted to arbitration before the Society of Maritime Arbitrators, Inc. in New York or before the Houston Maritime Arbitration Association in Texas. The arbitrators in these organizations are extremely knowledgeable maritime commercial people who are well equipped to handle disputes both large and small in this area, and they can be expected to expand their capabilities in the offshore wind sector as the industry expands and matures.

Despite the many challenges, the U.S. offshore wind industry is on the precipice of great development and expansion. As with any new and emerging industry, there will be winners and losers in the market. Those who succeed will be those who are best equipped with experience and knowledge so that they can anticipate the many twists and turns still to come. 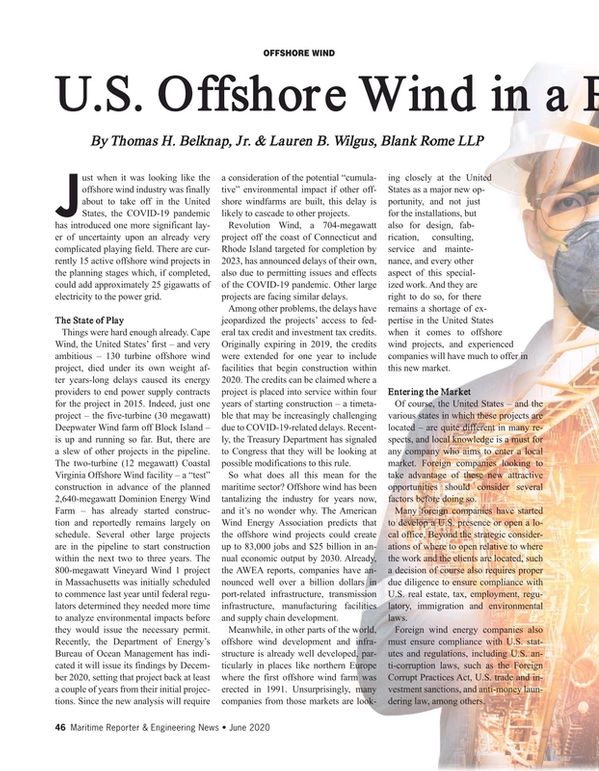