The pace at which the maritime industry transitions to low- and zero-carbon fuels will have the single biggest impact on its global carbon footprint, more than predictable shifts in commodity demand, advances in ship technology and operating practices, or new designs.

That is a key finding of a comprehensive new report, Setting the Course to Low-Carbon Shipping, from the American Bureau of Shipping
The report looks at the decarbonization of shipping via two distinct scenarios: a ‘standard’ scenario, which uses publicly available forecasts for energy demand and global trade to anticipate fleet growth; and an ‘accelerated climate action’ (ACA) scenario, which examines the potential impact on those forecasts from an escalation in global efforts to combat climate change.

Both scenarios use their analyses to anticipate vessel demand in five key sectors and across 10- and 30-year horizons, as well as examining the influence that fleet fluctuations will have on the ability of shipping to meet the IMO’s emission-reduction targets for 2030 and 2050.

Those ship types comprise the majority of the deep-sea fleet and are expected to account for 68% of global emissions from shipping this year.
In the standard scenario, energy consumption and trade forecasts were mapped against projections for the adoption of low- and zero-carbon fuels to suggest that, by 2050, shipping will remain dependent on fossil fuels for about 40% of its fuel requirements.

If that proves true, further analysis suggested the industry was likely to meet the IMO’s mandate to reduce its carbon intensity (CO2 emissions per ‘transport work’) by 70% by 2050, but will fall short of its most ambitious target, an outright 50% reduction in greenhouse gasses by that time.

To bridge that gap, regulatory and policy frameworks will need to be revised, either to encourage a global faster transition to more renewable forms of energy, or to escalate shipping’s technical development of low- and zero-carbon fuels, electrified power generation systems and /or onboard systems to capture carbon.

For shipping, it will not come without cost. Any transition to low- and zero-carbon fuels can be expected to increase the cost of vessels and their operation in the medium term, until the technologies associated with fuel production, distribution, bunkering and combustion become more cost effective.

Another area that will impact the decarbonization of shipping is the rate of electrification of the power generation and propulsion systems. Relatively new systems such as hybrid diesel-electric or fuel cells have the potential to offer significant emissions benefits.

Their market penetration is increasing, mostly on local routes and within environmental control areas; however, their adoption in larger vessels will require more technological innovation, operational certainty and the cost reductions derived from economies of scale.

The report identifies three basic fuel pathways towards the decarbonization of the fleet: light gas; heavy gas and alcohol; and bio- or synthetic fuels.

All three pathways start with fuels that are currently used in power-generation and propulsion systems – such as liquefied natural gas (LNG), methanol and biodiesel – and have the proven potential to reduce CO2 and other regulated emissions.

Longer-term fuels, such as hydrogen, may not be currently available. But they are all under consideration and it is expected that they will enter the market at varying rate. Low- and zero-carbon fuels that have low volumetric energy content – ammonia or hydrogen – may require holistic designs of vessels to be used as primary fuels.

The report presents a variety of forecasts, fuels and technological options to provide the type of insights that can help ship owners to make informed decisions. ABS remains fuel and technology agnostic and acknowledges that any selection has to be addressed from a safety and practicality perspective. Furthermore, market conditions are expected to influence the fuel selection for each vessel.

As a example, since the report’s publication, the COVID-19 pandemic has derailed the global economy and sent oil prices to levels that could reduce incentives to invest in developing low-carbon technologies. Nevertheless, any 30-year forecast accounts for temporary shocks.

In the interim, acquisition-minded ship owners with an eye on the 2050 emissions targets are faced with complex decisions with many fuel choices to consider and uncertain timelines for their availability at commercial scale.

To some degree their vessels’ trade profiles will help to narrow the options of suitable fuels, at least in the short-to-medium term.

Both short- and deep-sea vessels can be used for international trade and carry similar types of goods. However, the markets are distinctly different in terms of ability to adopt new technology, available resources and the complexity of their regulatory frameworks.

Their trade and regulatory landscape can make them ideal candidates for early adoption of new fuels and the technologies that promote environmental sustainability, including LNG, methanol and ammonia, as well as hybrid-electric power generation and propulsion systems.

While fuels such as methanol and ammonia have a strong potential to lower carbon output, their low energy content – which limits the amount of energy they can store in the standard tanks of today’s ships – presents a challenge. Similar challenges arise from the use of batteries in hybrid-electric propulsion systems that require frequent recharging when being periodically operated in full electric modes.

Simply put, short-sea shipping is better suited for the use of fuels and systems that require frequent bunkering and/or charging. Many also operate in single regulatory jurisdictions, which can be attractive proving grounds for the early adopters of emerging technologies.

The adoption of low- and zero-carbon fuels for deep-sea vessels is more challenging. Using fuels with low-energy content would require a significant redesign of vessels, primarily because their fuel tanks would need to be expanded to store enough energy for the longer hauls.

Also, from a commercial perspective, the larger ships tend to be designed to carry a single type of cargo, which are more vulnerable to market fluctuations. This uncertainty makes their owners more cautious about adopting new technologies until they are operationally and economically proven.

As the new fuels and technologies become viable, the operational profile of each vessel will have a great influence on their adoption as owners pursue their most efficient pathway to a zero-carbon future. 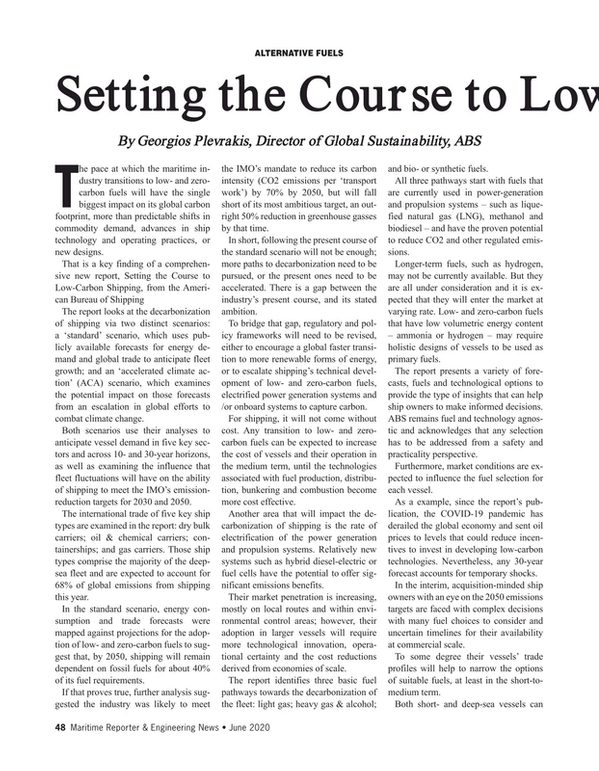