Responder Immunity: The Means to Protect the Salvor in “Bet the Company” Responses

The specter of liability beyond the limits of applicable insurance for the salvor’s liability to both its contractual partner and third parties continues to haunt the American Salvage Association’s members. Hence, the efforts since 2011 to obtain broad based immunity from claims beyond the patch work of statute, judge made law and contractual risk shifting terms. The exposure on certain projects to the prospect of “you bet the company claims” has caused prospective bidders with the requisite skills, technical expertise, and physical resources to decline opportunities to participate in major but high-risk projects. Responder immunity would negate this disincentive.

The Deepwater Horizon explosion followed by the extended and risky effort to staunch the flow of oil from the well brought home to the domestic salvage industry the financial risks falling to responders in such a massive casualty.  Most important was the realization that the financial exposure which the Deepwater Horizon explosion produced quickly outran the protection afforded by all available insurances.

Following the Deepwater Horizon, the ASA thus led an ultimately unsuccessful effort to obtain immunity through an act of Congress The ASA is now examining the prospect of gaining by contract at least some of the benefits that the proposed legislation would have conferred. by using tried and true risk shifting devices such as cross indemnities, and waivers of claims.   If the industry finds the concept should also apply to otherwise insured matters, then waivers of subrogation, and additional insured provisions will also come into play.

The loss of the Deepwater Horizon in April 2010 and the consequent massive third-party liabilities – real and potential – far beyond the limits of any available insurance- brought to the fore the financial risks responders faced.

As a result,at least two major U.S. companies declined to undertake efforts to plug the well out of concern for the exposure they would take on if efforts failed.  In addition, it is the ASA’s understanding that its members have and are continuing to decline work for similar reasons.
If the industry is to be encouraged to take on work presenting great risk, means must be found to assuage the entrepreneurial risk the work entails.

Protection of Salvors Under U.S. Law

Current U.S. law affords some protection to salvors, but that protection is spotty at best,

OPA 90, some  case law, and the traditional ship owners’ right to limit liability in non OPA situations provide some intermittent protection to salvors.
OPA immunity is granted to “any person” who incurs a liability for “removal costs’” and “damages” [as defined in OPA-90] resulting from “actions taken or omitted to be taken in the course of rendering care, assistance or advice.” (33 USC §1321 (c (4))

With respect to the foregoing language, three caveats are in order:

First, “person” is defined as “include[ing] an individual, firm, corporation, association, and partnership.”  33 USC § 1321(a)(7).  Salvors certainly seem to fill this definition of “person.”.

Secondly, OPA 90 only provides a limited immunity for “persons.”  The limitations include (i) the operative event is the response to a spill subject to OPA 90; (ii) excludes claims for personal injury and death; (iii) is inapplicable if the responder has been grossly negligent or guilty of willful misconduct; (iv) the immunity does not apply to responses other than “oil spills

Finally, the immunity is limited to the defined “removal costs” and “damages..” as defined and  , does not include items such as,vessel damage, loss of income to the vessel and salvors.

With respect to developing case law, responders who follow government directives in carrying out their work are also immune to third party claims. See In Re Deepwater Horizon, 2016 WL 614690.

Traditional case law generally, but not universally hold a salvor liable only for “gross negligence.

Salvors working on non OPA incidents may be able to invoke the 1851 limitation of liability statute, 46 USC §§ 30501-30512.  and may be able to limit  liability based on the value of the vessel after the casualty (except in the case of personal injury and death claims But limitation is disfavored by U.S. courts, so this protection, even if theoretically available, is ephemeral.

The above summary demonstrates that salvors face liability for gross negligence, will have great difficulty limiting liability under the 1851 statute and cannot limit under OPA-90 or, as a practical matter  the 1851 limitation statute, for personal injuries
Current U.S. law does not adequately protect the salvor when insurance is unavailable.

While the effort to obtain expanded immunity began in 2011, 2016 saw the ASA lead an ultimately unsuccessful effort to persuade Congress to augment responder protection.

Concluding that at this time Congress would be not entertain a second attempt at a statutory remedy, no further legislative effort has been initiated.

Protection by Contract Since legislative relief is not available, attention has now turned to contract-based solution.

The use of cross indemnities and waivers of claims, and if the contract also applies to insured claims, insurers’ waivers of subrogation and acceptance of additional insured clauses will provide the required protection.

The clauses represent not a radical departure from established allocation of risk principles, , but rather application of traditional tools protecting against financial catastrophe.  Both the insurance and salvage industries have long employed these very contract and insurance devices in widely used forms such as the BIMCO Towhire and Wreckhire,

…Without such a provision, the substantial financial risks and liability exposures associated with spill responses could deter vessel operators, cleanup contractors, and cleanup cooperatives from prompt aggressive action.”  H.R. Rep. No. 101-653 at 45.

History has already proved the wisdom of Congress’ recognition that financial risk can determine the willingness of responders to undertake a specific effort. This disincentive to action must be blunted.

About the Author: Alfred J. Kuffler is Partner, Montgomery McCracken, Walker & Rhoads LLP. He specializes in maritime law and marine insurance, and is currently Legal Counsel to the American Salvage 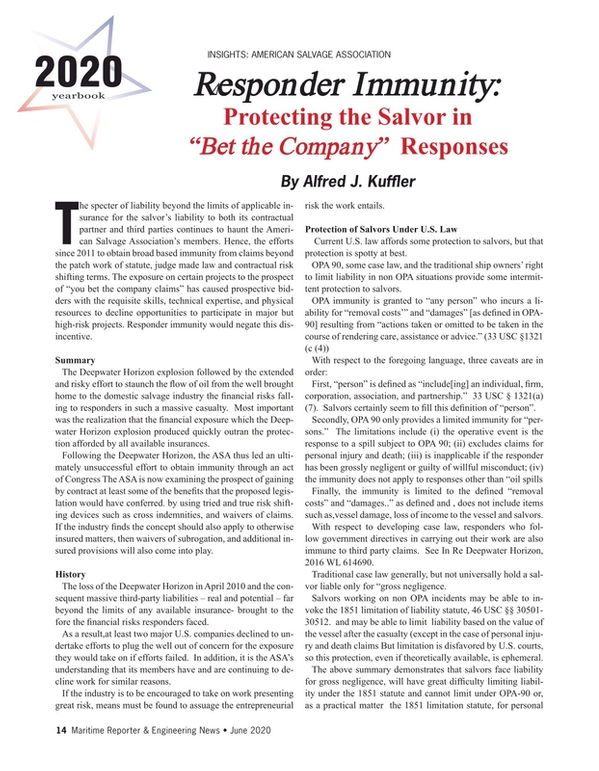 Read Responder Immunity: The Means to Protect the Salvor in “Bet the Company” Responses in Pdf, Flash or Html5 edition of June 2020 Maritime Reporter