If a discharge, or a substantial threat of a discharge, of oil or a hazardous substance from a vessel, offshore facility, or onshore facility is of such a size or character as to be a substantial threat to the public health or welfare of the United States (including but not limited to fish, shellfish, wildlife, other natural resources, and the public and private beaches and shorelines of the United States), the President shall direct all Federal, State, and private actions to remove the discharge or to mitigate or prevent the threat of the discharge.  33 USC §1321(c)(2)(A) (emphasis added).

The official legislative history of OPA 90 is replete with evidence that Congress meant exactly that. No more would responsible parties or others direct the response measures. Rather, the responders became answerable only to the President or the Federal On-Scene Coordinator (FOSC). It is the non-delegable responsibility of the federal government to bring about the effective and immediate removal of a discharge or threat of a discharge. The duties of the responsible party are to cooperate with and assist the FOSC and to pay all damages and response costs.

This mandate was reinforced with the adoption in 1996 of the Chafee Amendment, which requires a responsible party to act under the National Contingency Plan (NCP) and its applicable response plan. The responsible party may deviate from its response plan (but not from the NCP) if and only if the President or the FOSC determines that deviation would provide for a more effective or expeditious response to the discharge or mitigation of its environmental effects.

Detailed regulations to implement the salvage and marine firefighting (SMFF) provisions of OPA 90 for tank vessels were not promulgated until 2008 and its application was not extended to non-tank vessels until 2013. This long gestation period involved much negotiation by all the stakeholders, most especially by the established salvage companies based in the United States. Those salvage companies were concerned with many aspects of the rulemaking, particularly with ensuring that companies offering themselves for this important service could actually perform and that the vast sums of money expended in developing the capacity to provide SMFF services would be recouped through the retention by a vessel owner or operator when a casualty occurred.

The SMFF regulations met both requirements. Those regulations mandated that a vessel owner or operator sign an enforceable contract for SMFF services only with a service provider that could meet the high standards provided for in the regulations. Further, they mandated that the proposed SMFF contract, including the funding agreement, be submitted for consideration by the Coast Guard before the vessel response plan (VRP) would be approved. The funding agreement provision is unique in that in no other portion of the VRP regulations is the vessel owner required to share with the Coast Guard such commercially important information. The rationale for this requirement relates back to the need for an efficient and expeditious response.

Because the up-front costs of SMFF services are astronomically higher than that for other response efforts, negotiations over response pricing (always undertaken on a time and materials basis) can be complex. Since pricing is negotiated in advance, response can commence immediately. For commercial purposes, the proposed SMFF contracts, including the funding agreements, are submitted for consideration and approval by the International Group of P&I Clubs (IG) prior to submission to the Coast Guard.

To provide the SMFF response resource providers with the comfort their high costs can and will be recouped, the law and regulations establish an exceedingly high bar for deviation from the approved SMFF provisions of the VRP. It should be noted that the deviation justification requirement is only found in the SMFF regulations, not in those regulations applicable to other response service providers.

During the SMFF rulemaking process, the Coast Guard received several comments recommending that the rule focus on ensuring adequate participation in the casualty response by the financial stakeholders, which are often the insurers of the responsible parties.  The Coast Guard dismissed those comments, noting that they were outside the scope of the rulemaking and would introduce a new aspect to the overarching incident command structure.

Nevertheless, in the response to the capsized car carrier GOLDEN RAY, the vessel’s financial guarantor was allowed to participate in the Unified Command (UC) process.  A salvage consultancy was supposedly hired by the responsible party to provide advice on the salvage operation. It was soon clear that the consultancy was actually working for and apparently taking direction from the financial guarantor, despite the Coast Guard policy on this issue.  Utilizing a non-disclosure agreement, the consultancy established a wall between the SMFF salvage resource provider listed in the owner’s pre-approved Vessel Response Plan (VRP) and the USCG Federal On-Scene Coordinator (FOSC), destroying the transparency and candid exchange of opinions that are vital to Unified Command (UC) process during a complex response effort.  Such an arrangement has seldom, if ever, been utilized in an active spill response under OPA 90 and certainly not to limit the access of the listed SMFF resource provider to the FOSC.

The consultancy then was allowed to issue an Invitation to Tender (ITT) for the wreck removal while the GOLDEN RAY still had onboard a large quantity of petroleum presenting an imminent and substantial threat to the public health and welfare or the environment. An ITT is the equivalent of a government agency’s Request for Proposals (RFP).  This again is highly unusual during an active response where time is of the essence and where the FOSC, in accordance with the Congressional mandate of OPA 90, has the full authority and access to the necessary financial resources to order whatever response process and procedures best serve the national interests.  Contrary of Coast Guard policy, the ITT mandated use of a fixed-price contract.  The ITT process needlessly delayed the response effort, particularly where, as here, the listed SMFF resource provider had capability to immediately undertake whatever measures the FOSC approved.

It is imperative to the efficacy of the US spill response program, clearly the most effective and comprehensive in the world, that the integrity of OPA 90 and its implementing regulations be maintained and reinforced, as necessary. In particular, allowing deviation from an approved response plan for a lesser rationale than required by statute and regulation negates any confidence that a SMFF service provider has in recouping its investment, as well as the service provider’s ability to obtain financing for necessary improvements. The edifice upon which OPA 90 and its regulations are based would be eradicated and this nation would return to the bad old days when vessel owners would hire the low bidder with little regard for capability. In addition, the SMFF service providers would slowly atrophy, losing their highly skilled personnel and becoming unable to maintain and replace their expensive equipment. Therefore, the Coast Guard must take the steps necessary to address shortcomings identified in the GOLDEN RAY response. 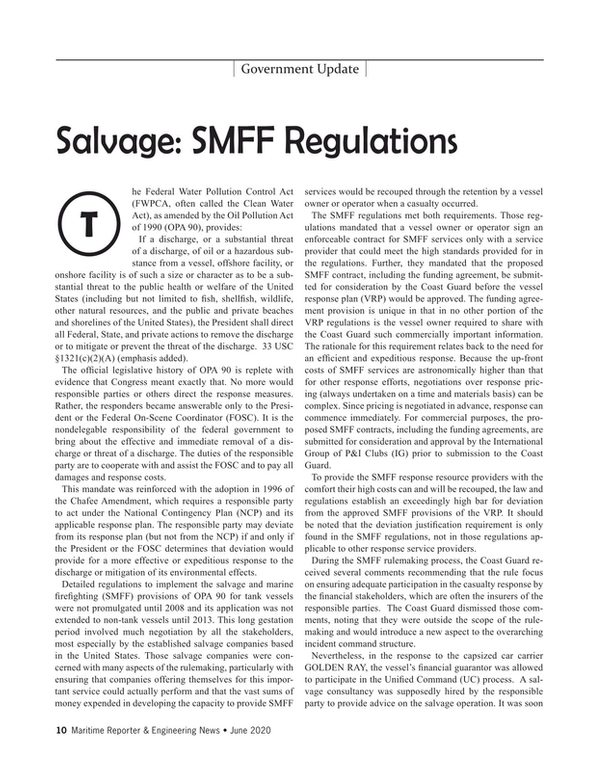