Starting from his father’s basement in Bayport, New York, John DiMartino and his brother Bill have built a custom, heavy lift powerhouse in Tandemloc. It’s a story of building something from nothing; a story of plotting a path and adjusting for multiple course changes along the way. Ultimately, it’s a story of engineering ingenuity and heavy lift success.

When John DiMartino graduated from SUNY Maritime in 1980 with a BS Marine Transportation Management, his career path started as projected, sailing as a third mate on a hopper dredge for North American Trailing Company, a division of Great Lakes Dredge and Dock. But after less than two years, he decided to go to work as a salesman for his father’s firm, which designed and manufactured container securing and lifting devices. “A few years later, in late 1983, dad’s company went out of business and we started Tandemloc in the basement of his home in Bayport, NY,” DiMartino recalls in a recent interview. “Early on I was functioning as the salesman, assembler, painter and order packer while my father ran things. In the mid-1990s I took the reins as president.”

Tandemloc was created literally in the ashes of his father’s company with no financing or facilities, “just three guys in the basement of my father’s house.” While it was light on corporate structure, it was heavy in engineering experience courtesy of his father’s container lashing experience. “We subcontracted the manufacturing to area shops,” said DiMartino. “We could not compete with the general container lashings and we focused on niche products, like the Tandemloc connector which was the company’s namesake.”

The Tandemloc connector is used to link mini containers together to form 20-foot equivalents and “it is still the only connector today that enables a connected array of containers to meet CSC approval, without waivers on some of the requirements. These mini containers are largely used by the military,” said DiMartino. 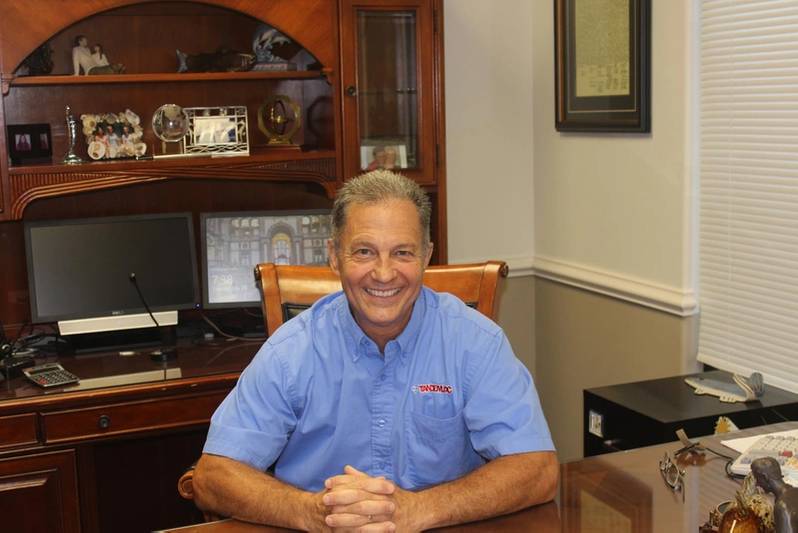 “We proof test every individual lifter. Not one in a batch, every single lifter gets proof tested ... We are serious about proof testing because lives are at stake.” John DiMartino, President, TandemlocThe first big move for the company was striking a deal with ILS in Belgium to operate its U.S. company selling its container lashing equipment. While the connection with ILS was discontinued after several years, the companies remained friendly and it was an instrumental part of

Tandemloc’s growth as “that got us out of the basement and into a small 3,000 sq. ft. building,” said DiMartino.A more pivotal move for the company came purely by fate, effectively setting the course for Tandemloc’s growth to the business it is today, as DiMartino explained. “My wife and I were travelling through North Carolina on our way back from vacationing in FL.  We fell in love with the area, not to mention the cost of living, which in itself was likened to a positive exchange rate between countries and we wondered about moving the company to NC. We met a realtor who, in DeMartino’s words, “made us an offer we could not refuse.”

That deal was a new 5,000 sq. ft. building in Havelock, NC, a building that for two years offered a rent of $1 a month.  So in 1992 DiMartino and his brother Bill packed up Tandemloc and their  families for the move to North Carolina, and at the end of two years and $24 in rent total, they bought the building.

Since then Tandemloc has expanded several times and now it owns more than 100,000 sq. ft. of space on 12 acres of land. 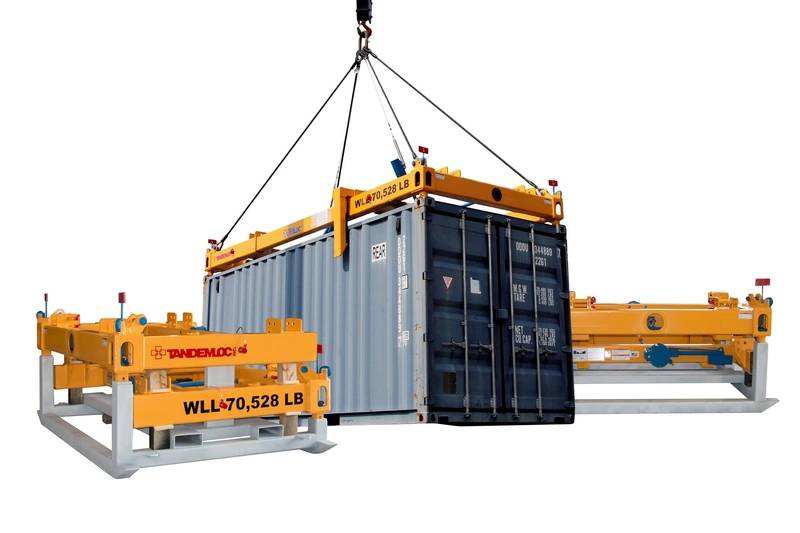 Since moving to North Carolina, Tandemloc has developed a variety of container lifting products, all non-powered and that includes 20 and 40 foot fixed frame spreaders, forklift spreaders , low head room load leveling spreaders and its newest member of the autoloc family, a modular 20/40 combo.  “A variety of container lift slings are also available and together in the mid 90’s this led to prospective customers requesting non container lifters,” said DiMartino. “So we found ourselves in the general below the hook market, first designing and manufacturing custom lifters.  As the years went by, this developed into a variety of informal product lines, eventually leading to a new product development department, focused on developing new product lines and cleaning up the existing lines, primarily for lifting.”

One of its top sellers is the “build your own” steel spreader beam assemblies, allowing customers to literally build their own spreader beams using Tandemloc’s stocked, proof tested components including end caps and spreader pipe. The pipe is cut to the exact length needed for the lift and end caps are available to make spreader beams in capacities up to 3 million pounds.

Another popular product is its fixed length spreader beams which can be built to spans of up to 40 ft. and with capacities of up to 100,000 lbs., with higher capacities possible with longer lead times. “We also provide from stock several sizes of telescopic spreader beams which as the name indicates, telescope to different lengths for different lift applications. Those that are not in stock can be shipped in 5 to 7 workdays. Capacities are up to 100,000 pounds in this delivery window, greater capacities are possible with longer lead times.”
Outside of heavy lifting the company is active in specialty container products, such as VI-SO Connectors, Container Casters and Hydraulic Lift Caster Systems. VI-SO clamping connectors offer a rigid connection which in certain applications is necessary, such as container living modules.

Finally, its Hydraulic Lift Casters are wheeled jacks that fit into the corner fittings and hydraulically lift the container up to 13.5 inches off of the deck and provide mobility in a very compact package.

Most recently Tandemloc developed Telescopic Spreader Pipe Kits for End Caps, a kit that enables the user to change spans quickly and simply, instead of having different lengths of spreader pipe on hand. “Our design is an improvement over a ‘modular’ spreader beam design that incorporates fixed length sections of flanged pipe weldments and requires the user to mix-and-match the sections to get the desired length and then finally bolt the sections together to make a spreader,” said DiMartino. “With our design the incremental length adjustment is in inches, versus the modular system’s foot-length adjustability. This has been well received in the field, enabling the end user tremendous versatility while saving labor time.”

To help the customer select the correct End Caps along with sizing the pipe and the correct length to cut, Tandemloc offers an App on our website which makes this process easy and foolproof. It also evaluates whether or not a particular set of caps or pipe is usable for other lifts and also provides working load information for our telescopic pipe kits as you change spans.
Another, the “Modular Autoloc,” is transported on a shippable pallet inside a closed van, saving the significant freight costs.  It also takes up less real estate for storage. The unit can be assembled to lift 20-ft. containers or 40-ft. containers. “It’s ‘pin-together’ design makes for fast assembly for either size,” said DiMartino. “Just like our standard Autoloc spreaders, this nonpowered spreader is considered semi-automatic, as it has simple mechanical operation with no electronics or hydraulics. The twist locks unlock or lock when the crane operator slackens the sling wires, providing for safe operation with minimal personnel involvement.”

CASE STUDY: AT09 "Rocket" Adjustable Spreader Beam
Tandemloc designed and manufactured and tested the AT09 “Rocket” Adjustable Spreader Beam. With a capacity rating of 170,000 pounds, the beam was required to provide a critically specific adjustment range while “under load.” A mechanical single-operator design, the adjustments are made via an 80 ft. pull chain that drives the beam’s padeyes and horizontally shifts the sensitive product so that it can be accurately placed in a special carriage. The design’s most challenging aspect was that “they wanted to keep the force required by the [pull chain] operator to be 40 lbs or less.

This required very precise engineering and manufacturing so that all of the moving parts met as little resistance as possible. In the end, the operator’s force required to move the load on the final design was approximately 25 lbs,” said Bill DiMartino, Tandemloc Executive VP and Director of Engineering. Per industry standards, prior to its first use out in the field the beam was proof tested to 212,500 lbs, inspected, and certified. Despite the critical and high-profile nature of the lift, DiMartino found peace in the company’s testing program. “I felt quite calm when the product went into service, because I knew the product was made correctly, and the proof testing went off without a hitch,” said DiMartino. The “Rocket” beam has continued its successful lifting career in a secure and unnamed location. 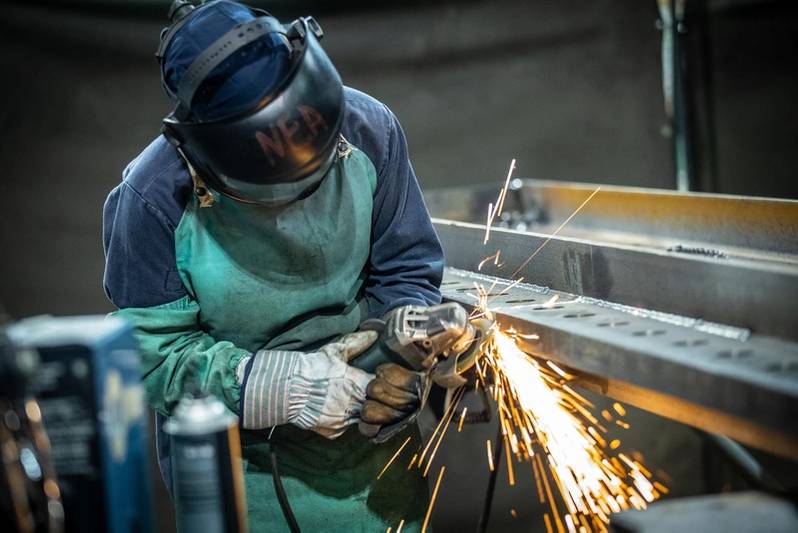 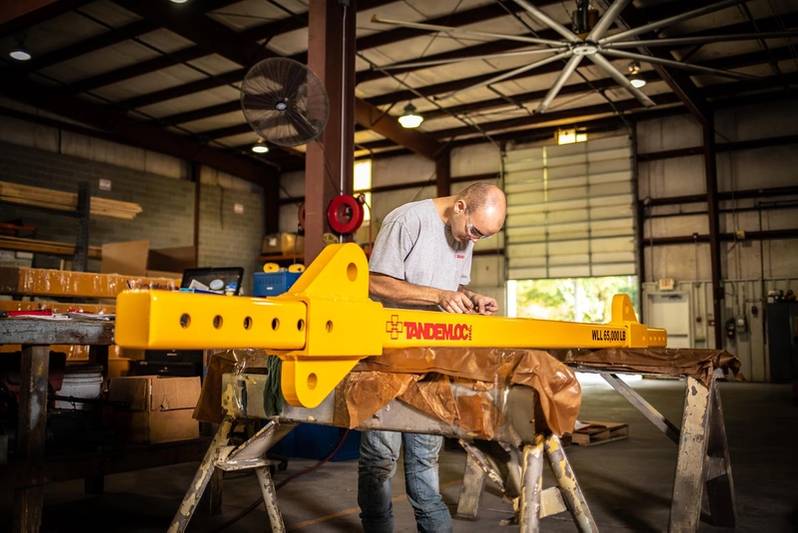 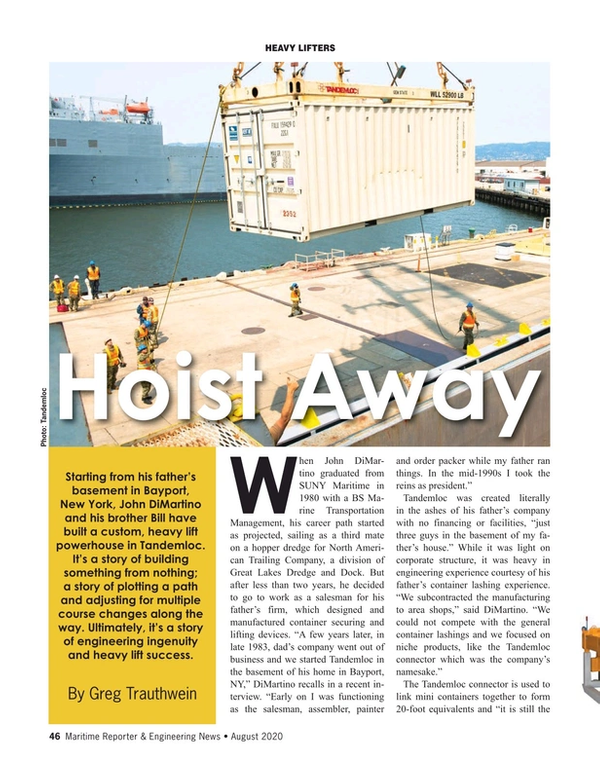