To the Bold Man Who First Ate a Raw Oyster

This is a technical article related to risk assessment, which is incredibly central to maritime endeavors. We operate in an environment with many unknowns and high unpredictability, and anything we do requires a risk assessment. In fact, naval architects, marine engineers, ship’s engineers and, most of all, ship masters do nothing but cast whatever they do in terms of risk.

Risk assessment can be mathematically evaluated, but most of us analyze risk based on experience. Let’s face it, a first boat trip for a 16-year-old is simply a fun ride, but once they have experienced a few bad trips and trip ups, a boat trip becomes an entirely different animal.

But here I will talk about perceptions and oysters. Jonathan Swift is credited with saying, “It was a bold man who first ate a raw oyster.” I was not first, and, by having others eat them first, I learned to like eating raw oysters, even though raw oyster consumption, like beef tartare, and even raw salad consumption, is not completely without risk (I tell my wife I manage that risk by cutting down on salads).

Besides being tasty, oysters are also an extremely important component of our littoral ecosystems. Without oysters, complete littoral ecosystem restoration in not achievable. This is why there are so many places where people try to restore oyster populations and especially oyster reefs.

And this occurred in the Navesink River in New Jersey in the first few years of this century. But then in 2008, just when the oysters started to settle in, the state came in and told the local baykeeper to dig them up and destroy them because they were being grown in waters that were not approved for oyster cultivation. The water was safe for swimming and even for clamming (but requiring post catch purification), but did not meet raw oyster consumption standards. However, the last thing that anybody wanted to do was eat these oysters. These oysters were supposed to stay in place and thrive and clean up the water. Regardless, the state quoted oyster consumption regulations and argued that somebody could sneak in, dig up the oysters, sell the oysters and somebody could get sick. The oyster bed was removed.

But let’s get back to risk assessment, is there an elevated risk from this effort? Various things need to happen to get someone sick from one of these stolen oysters.

It could happen, but is there an elevated risk? The elevated risk is actually very slim. The chance of oyster contamination from a certified oyster bed is not zero. It is a real risk that has been driven down to an acceptable level (let’s call the risk .01%). A certified bed will inevitably have its oysters removed for consumption, while the oysters in the Navesink are intended not to be removed for consumption. It is reasonable to assume that the risk of contamination of a Navesink oyster is higher, but how much higher? Let’s assume the odds of a Navesink oyster carrying a disease that will make someone sick is 10 times higher (.1%). That oyster still needs to make into the human food chain and that would mean that a thief can steal the oysters at will, not get caught, and sell the oysters. Let’s assume an effort at theft happens at a rate of 50% of the normal certified bed harvesting rate (high), and that the thieves get caught only 50% of the time (probably low in our case), and manage to confuse seafood wholesalers 50% of the time (probably high). In that case the odds of these contaminated oysters ending up on your plate are only marginally higher than the odds of getting sick from a certified oyster. (.1% x .5 x .5 x .5 = .0125%, barely more than .01%) In other words there is no elevated risk at all of getting one of those oysters on your plate, it just appears that way at first glance.

This is a mathematical approach to risk, there are many other arguments that show that the removal of the reef made no sense. There are many places where there are oysters in uncertified waters. So why is there no nefarious harvesting of those oysters? And why don’t we have any people getting sick from those oysters? (Note the similarity to the vote by mail debate arguments.)

The problem is that a lot of policy gets made at first glance, rather than after deeper examination, and often policy sweeps with a wide broom rather than with a surgical brush. What actually occurred is that a valid regulation for human oyster consumption is now being applied to oyster reef restoration, and one simply is not the same as the other. This occurs more often than we tend to realize; regulations that make sense in one context are applied in another context without a further evaluation of the associated risks and benefits.

The Baykeeper has been pressing the state for a resolution on this issue since 2008, but no headway has been made. The oyster consumption regulation needs to be decoupled from oyster reef restoration, but even if it cannot be resolved at a regulatory level, the state could simply accept a risk reduction approach. In this case that is quite easy, since mounting IR cameras to monitor the reef is cheap and easy to do. This would very strongly reduce the odds of theft and its associated risk, and is a simple rational solution. However, it runs into an issue that Jonathan Swift is also quoted on: “You cannot reason someone out of something they were not first reasoned into.”

Meanwhile, the river is not getting any clearer. Regulations are important to maintain societal equity, but when a regulation prevents a rational problem solution, we move into the world of Gulliver’s Travels; maybe amusing to read about, but not a good place to live.

For each column I write, MN has agreed to make a small donation to an organization of my choice. For this column I nominate the NY/NJ Baykeeper, https://www.nynjbaykeeper.org/ to support their oyster restoration efforts. 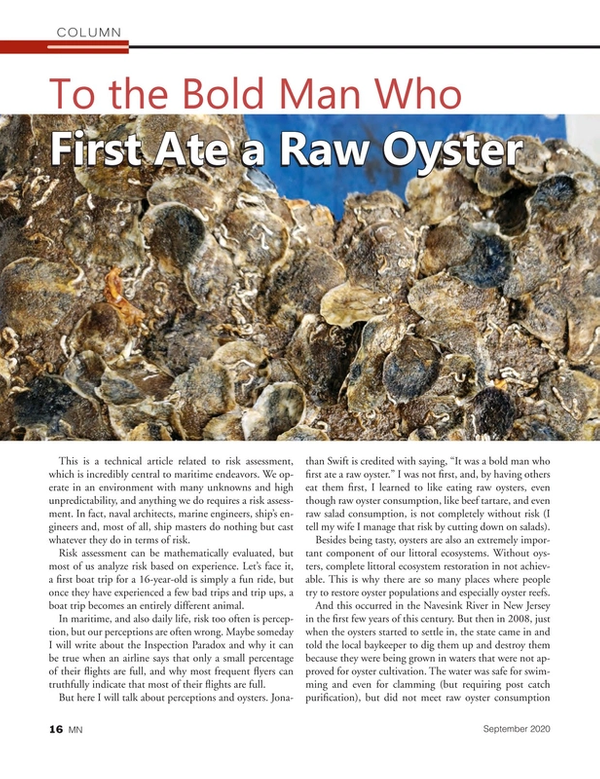 Read To the Bold Man Who First Ate a Raw Oyster in Pdf, Flash or Html5 edition of September 2020 Marine News