Ocean observatories play a crucial role in relevant aspects of the climate system on longer time-scales, including among others, global heat budget, sea level rise, potential variations in the meridional overturning circulation, and long-term storage of climatically relevant compounds such as CO2. Expanding the ocean observing system towards being truly global will require an increased commitment to the design and implementation of technologies for collecting offshore and deep ocean data and transmitting them to shore in a useful and cost effective manner. By definition, ocean observatories usually include a broad and multidisciplinary range of fix and mobile autonomous platforms, from underwater vehicles to sea-bottom seismic networks, including moored surface and subsurface buoys, floats or drifters. Most of them are designed to provide continuous, or at least periodic, field data over a long-time period in near-real time.
The European Station for Time-Series in the OCean -ESTOC- is currently joining the global ocean monitoring strategy as site-partner of baseline initiatives such as EuroSites, ICOS, ESONET or EMSO. Placed 60 nautical miles off Northwards Gran Canaria island at 29º 10’ N, 15º 30’ W with a depth of 3685 m., is still operational since 1994 through a permanent observing program addressed to monitor biochemical seawater parameters variability over time using a wide in-situ sampling methodologies and instruments i.e. research vessels, VOOP, moorings, turtles, drifters, underwater gliders, among others.
ESTOC is located in the North Atlantic Sub-tropical Gyre and exhibits oligotrophic characteristics. The circulation is driven by the southward-flowing Canary Current and the NE Trade Winds. A clear seasonality is recognizable when upper layer temperature reveals warming during the Summer season and cooling during Winter. Nowadays the site is managed by the Oceanic Platform of the Canary Islands -PLOCAN- through a multidisciplinary set of in-situ monitoring autonomous platforms, where unmanned surface and underwater vehicles develop a special role.
PLOCAN is a multi-purpose public consortium infrastructure engaged for research, technology development and innovation in the marine and maritime sectors. Its main goal is to promote long-term and sustainable ocean observations, providing a cost-effective bend of services as test site, observatory, underwater vehicles base, as well as training and innovation hub.
In this regards, PLOCAN focuses on international and interdisciplinary networking and partnership activities with key-baseline research institutions and companies in the field of marine and maritime technology. The norwegian company Christian Michelsen Research -CMR- Instrumentation, represents a suitable example in this sense. CMR is a highly specialized company for the design and development of groundbreaking ocean instrumentation specially addressed for harsh environments, being one of its products the autonomous unmanned ocean vessel, SailBuoy.

The SailBuoy Technology
The SailBuoy is a small unmanned wind-driven ocean vessel able to travelling across the oceans for extended periods of time. It navigates autonomously, controlled by Iridium satellite link communications, transmitting data in real time underway. Since Iridium is a 2-way communication system, commands such as new waypoints, tracks and sensor parameters can be easily sent to the vessel underway. The SailBuoy can be fitted in a highly modular way with a wide variety of instrumentation payloads able to be used for a broad number of ocean applications. It can easily keep station or travel from point to point.
The high modularity level offered by this technology allows to integrate a broad number of sensors engaged to monitor parameters like i.e. water temperature, conductivity, dissolved oxygen, heave (wave height), fluorometer, chlorophyll in vivo, blue green algae, crude oil, current, wind, air pressure. hydrophone, echo sounder, among others. Therefore, a wide range of scientific and industrial direct applications are able to SailBuoy’s users, i.e. climate science, oceanography, meteorology, seismic monitoring, marine mammal monitoring, algae tracking, wave measurement, emission monitoring, fisheries management, aquaculture, visual inspection, subsea communication, transportation,... among others.

The Mission: Goal and Description
The mission’s goal focused on testing and evaluating technical aspects of the navigation and sampling site from the SailBuoy technology for a first time in subtropical areas as it is the Canary Islands archipelago, while to improve the ESTOC’s monitoring program strategy. The mission was performed through the surrounding waters of ESTOC site and the channel between Gran Canaria and Fuerteventura Islands with the SailBuoy unit SB02.
For this specific purpose, SB02 was fitted with a payload sensor configuration that include a Neil Brown’s G-CTD for water conductivity and temperature, and an AADI Optode 4835 -shallow water version- for dissolved oxygen measurements. Sampling rate was ½ hour for most of the time and increased to hour during starting and ending mission periods.
Piloting tasks were time-sharing carried out between skilled technical staff from CMR and PLOCAN through a dedicated user interface directly linked to the Iridium satellite system. Despite the high marine traffic density usually existing in central areas of the Canary Islands archipelago (specially Las Palmas harbour surroundings), SB02’s piloting was performed without any noteworthy issue, even crossing several times some of the main cargo and oil-tanker shipping lines in the area. The gathered sea-state conditions were under a wide Beaufort and Douglas range variability (from 0 to 7 and 0 to 5, respectively), where wind speed varied from 0-29 Knots and wave height from 0-3.2 meters. The overall distance sailed was 460 Nm along 22 days mission, from 13th November to 5th December 2012. During this period of time, SB02 sailed windward 75% and 25% leeward, being required for that purpose several tack maneuvers. The maximum speed value reached was 3 Knots being the average 0.85 Knots for the whole performed mission. A total of nine waypoints were required to pilot SB02 properly according to the navigation needs and existing wind and sea-state conditions. SB2 was deployed off Southwards Gran
Canaria and recovered three weeks later few nautical miles off La Isleta, at the Northeast coast of the previously mentioned island.
SailBuoy’s piloting requirements are very few. Only a web browser over internet is required. In terms of tasks, first one is to define the target waypoint and setup the desired and safer path to follow. The path should avoid as best as possible shipping lanes, staying away from the coast and trying to sail as inside the strongest wind zones as possible. A standard piloting procedure is to decide a destiny waypoint and a corridor width that depends on the sea and wind conditions. The corridor width is the SailBuoy’s horizontal deviation along the ideal straight line track.
A standard value of 10 km radius is used allowing SB02 to sail diagonally from the ideal track, having space to manoeuvre and not forcing her to tackle so often, saving power. This value should be reduced when crossing a dangerous zone, to keep tight the path.
On daily basis, checking the SailBuoys status (GPS location and sensors output values), wind forecast maps and marine traffic are the must-do tasks. The wind maps will give an approximation of how SailBuoy will behave, and if the Waypoint should change according to wind forecast. Sometimes is not possible to avoid shipping lanes, but one should try to predict traffic densities and cross the lane in the hours when there is the least amount of traffic. If it is necessary to change the waypoint or the radius, the commands are also sent via this web interface. Finally, data is displayed on a table for NRT analysis, but it can be easily downloaded and imported to any data processing software tool.

Conclusions
A SailBuoy unit has been tested for first time in subtropical latitudes with successful results in operational and scientific terms. Sea-state conditions along the mission were highly variable, from calm to Beaufort 7 and Douglas 5, enabling to test the vehicle in different work-sailing scenarios. Biofouling effect was an issue to consider only in few and specific hull places. Piloting tasks were easy and successfully performed despite marine traffic density at certain times and opposite sea-state conditions when calm. Gathered scientific data allowed to clearly identify the startup of the decline in the annual temperature pattern, while identify monitoring synergies between autonomous platforms in ocean observatories as is ESTOC, with special relevance in terms of surface and underwater unmanned vehicles. SailBuoy can be considered an efficient, rugged and affordable device for autonomous in-situ and real-time surface ocean monitoring. Baseline partnership collaboration between CMR and PLOCAN through SB02 mission has been mutually helpful and successful for both sides.

Acknowledgments
The authors want to acknowledge all institutions, companies and people involved in this challenging mission, with special mention to the EU-FP7 Program for funding the GROOM project within this mission has been partially carried out. Also to thank technological partners like Grafinta SA for their support and collaboration. A special mention also to Las Palmas and Tenerife Harbourmasters authorizing the mission performance across to the described Canarian waters. 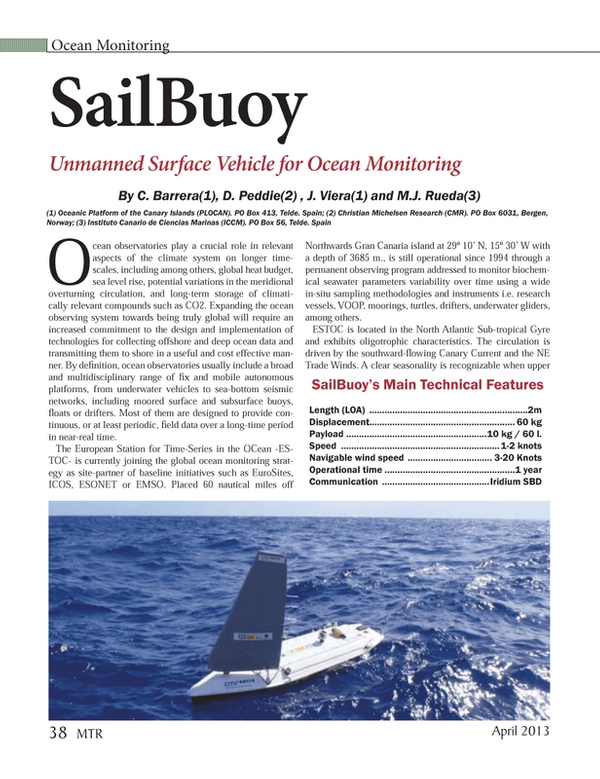