ATIVA Subsea Solutions ‘Made in Brazil’

ATIVA is a Brazilian company that develops and provides innovative technologies in Subsea Engineering. ATIVA specializes in developing solutions to the constant technological challenges encountered in deep waters Oil & Gas operations. The company offers services from custom designs for their client all the way to operations in the field.
ATIVA is an offspring of the Genesis Institute of the Catholic University of Rio de Janeiro (PUC-Rio), which foments the creation of technologically oriented businesses ventures run by university students and graduates.
Marine Technology Reporter’s correspondent in Brazil interviewed Mr. Daniel Almeida Camerini, one of the partners in ATIVA, about the origins of the company and it’s role in subsea technology development in Brazil.
Daniel, along with partner Rodrigo Carvalho Ferreira command ATIVA, also known as Ativatec, in the highly competitive Brazilian subsea equipment and services market.
The subsea equipment segment of the O&G industry in Brazil, is mostly controlled by foreign companies with long track records in the area. Few 100% Brazilian companies are present in this market, which is very competitive and requires large investments in high-end technology and specialized engineering skills, making it a market which has products of high aggregated value. With the continuous growth of the deepwater equipment and services demand from super-major players present in Brazil, companies such as ATIVA are proof that local high-end subsea engineering is reaching out to face-off with established foreign competition and may also be indicative of the importance of Brazil’s government sponsored local content policy.

Could you give us an insight into your professional profile?

I am 33 years old, and I hold a Masters Degree in Automation and Control Engineering by PUC-Rio, I have coordinated R&D projects in the O&G industry as Research Engineer for PUC-Rio for last 10 years, and I am presently partner and manager of Ativa Tecnologia e Desenvolvimento (Ativa Technology and Development).
Along with participating in the development of new equipment patents in the subsea industry I have received prizes and presented scientific papers in Pipeline Congresses, such as “Honorable Mention in the Rio Pipeline 2003 conference;” “Pipeline pigging, integrity assessment, and repair conference 2003 – EUA;” “International Pipeline Conference 2004-Canadá.” Rio Oil & Gas 2004, Inventor Prize from Petrobras in 2008 with the work on “Pig Leak Detection by Infra-Red and Inventor Prize from Petrobras in 2012 for the work on “Sistema para inspeção por ultrassom de falhas em acoplamentos submarinos e método de operação e funcionamento deste sistema” or (System for ultrasonic inspection in subsea coupling faults and method of operation of this system).

Why did you decide to start a company specializing in subsea technology?

The company partners are graduates of the Catholic University of Rio de Janeiro (PUC-Rio), where they also worked in research and development projects in partnership with the Petrobras Research Center (CENPES). During this period the partners noticed that there were few local companies specialized in subsea technology and practically all equipment and services are important and have high aggregated value.
With the certainty that the technical capacity of the ATIVA team in developing products and services with high reliability and lower costs than the imports, along with the increasing demand from O&G operators to drill and produce in increasingly deeper waters, Ativatec presented itself to the market as one of the few Brazilian companies specialized in subsea technology.

What was the importance of the Genesis Institute of PUC-Rio for the company?

The Genesis Institute was important in integrating the company with professors and students at the university, to give visibility to the company through the media and in the technology and business communities specialized in subsea technology in Brazil.

When was the company founded, and how many people do you employ?

Ativatec was founded in 2006 and employs five people.

Which are your main clients?

Our main client is Petrobras.

Which are the main jobs executed by the company for the O&G industry?

Ativatec has been developing new technologies for subsea Inspection, Intervention and Monitoring. In 2008 Ativatec developed a ROV operated tool for testing integrity and shielding of screws in production equipment such as Christmas Trees, MCV’s and BAP’s installed in 2000m depths. More than 50 successful inspections were made in offshore production fields for Petrobras in 2010.
In 2010, in partnership with Petrobras, Ativatec developed a ROV operated tool for ultrasonic inspection of subsea equipment. Baptized as Crab Tool, it is capable of detecting 3mm fissures in screws and plates installed in 3000m depths with high reliability. In 2011, more than 40 successful field inspections were done and the technology was patented.
In 2012 Ativatec in partnership with Petrobras, developed another ROV operated tool for use in breaking up hydrates present in connector in equipment such as MCV’s, SCM’s, Tree Caps and Subsea Xmas Trees for the total or partial reestablishment of well production. The technology was approved in laboratory tests and will be available in the market in the second semester of 2013.

Which are the main products and services offered by ATIVA?

Our main products and services include:
- Ultrasonic inspection of subsea equipment for the detection of fissures and loss of thickness by corrosion.
- Intervention for hydrate break-up in subsea equipment for partial or total re-establishment of production.
- Collection of soil and water samples for offshore environmental monitoring.
- Research and development of new technologies in subsea robotics for the O&G industry.

Which are the biggest challenges in working with products used in the deepwater segment of the O&G industry?

The challenges are in offering products with simple interfaces to be operated and/or installed by ROV’s and that offer at the same time high reliability, minimum maintenance needs, reduced weight and dimensions and high mechanical robustness to resist the high salinity and high pressure encountered in deepwater marine environments.

How do you see the future of the subsea segment of the O&G industry in Brazil?

The Brazilian market for subsea robotics for inspection, intervention and environmental monitoring is in increasing expansion. Various companies from around the world are investing in this area due to the aging of existing subsea equipment, which begin to deteriorate due to marine effects, generating production problems and even environmental accidents.
Other than that, the exploration of the pre-salt demands great investments in new subsea technologies for E&P in ultra-deep waters, which has been attracting international companies to Brazil.


How does your Research and Development process for automation and instrumentation equipment for deep waters work?

Our R&D process follows this order: Identification of business opportunities, research of the demand by possible clients, literature and market research of related technologies; brainstorming of concepts by our team; estimation of costs and deadlines, laboratory prototype development for testing of new concepts, mechanical and electronic projects in subsea engineering, prototype construction for field tests, revision of projects based of field test results, and field operation to validate the technology.

Our equipment have optical interfaces for data transmission, through the ROV video camera and an electric interface via the ROV umbilical.
The difficulty in real-time deepwater data transmission lies in signal attenuation due to the long length of the umbilical cable, which in ultra-deep waters and reach 3km, which many times requires the use of fiber optics.

What are your plans for the future?

The company plans are focused in firming partnerships with high-end companies in our segment in order to participate in large contracts and increase our team and industrial area.

How does the “Hot Stab Ativa” work and what are the advantages of your system over similar imported systems?

The Hot Stab Ativa has compact dimensions and three hydraulic functions of 5000psi, magnetic coupling and a flexible gauntlet that increase the connection operation reliability via ROV.

How does your partnership with AC-ROV work?

Ativatec is the distributor of AC-CESS (www.ac-cess.com) in South America. We also make product demonstrations, technical support and product training in Brazil.

Is there any other information you would like to pass on to MTR readers/potential investors?

Ativatec is looking for a partner in the subsea area in order to undertake offshore inspection, intervention and environmental monitoring services, specifically in ultrasonic inspection, hydrate dissociation and subsea integrity monitoring. Ideally, an interested company would have expertise in ROV operations and offshore equipment, such as hydraulic crane and subsea equipment operation. 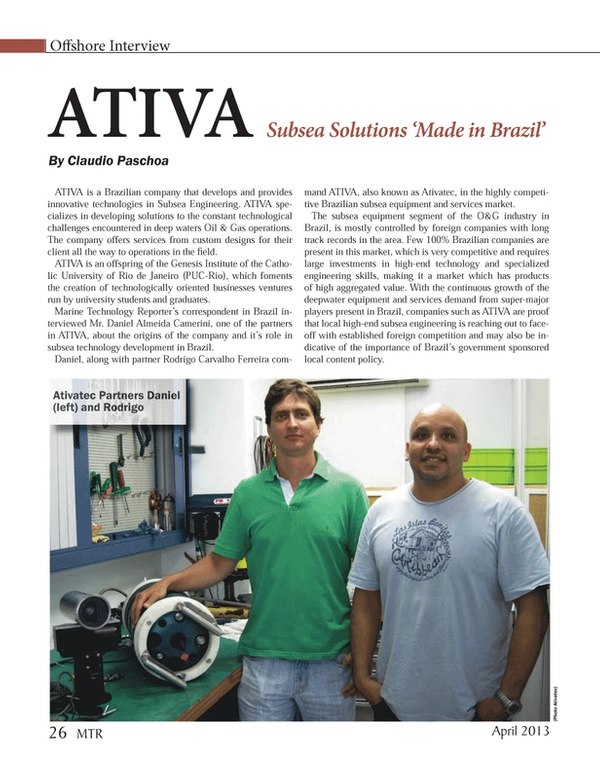