The Port of Baltimore is poised to muscle its way into the nation’s elite top 10 ports. How that happened really isn’t hard to understand. That’s because what comes next will be the dividend of many years of focused planning.

The Port of Baltimore consists of state owned marine terminals managed by the MPA and privately owned marine terminals. Approximately 90 percent of all general cargo tons move through the MPA’s public terminals, while the private terminals handled most of the Port’s bulk commodities.
In 2018, the Port of Baltimore (POB) experienced a record year in foreign cargo tons. Import and export tons totaled nearly 43 million tons, surpassing the previous mark set in 1974. The value of foreign cargo that the POB handled was $59.7 billion. Coal and LNG exports were the primary reason for the ports overall increase in tons. Coal exports continue to set records with over 21.5 million tons exported in 2018. 2018 also brought the first LNG exports through the Port. The POB also saw growth in the overall general cargo tons led by containers and automobiles.

Also in 2018, the Maryland Port Administration (MPA) handled a record 10.9 million tons of general cargo at the State owned marine terminals. In terms of containers alone, a record 1,023,161 TEU’s were handled and this marked the 9th straight year of growth in containers.

Separately, the Port of Baltimore handled over 850,000 auto units in 2018 (another record). Today, the Port of Baltimore is ranked as the nation’s 11th largest port in terms of foreign cargo tonnage and 9th largest in terms of dollar value. Still, and at the same time, countless other U.S. ports reported ‘record’ volumes and tonnage of one kind or another in the past 12 months.

At a time when trade wars and the perception of a slowing global economy might suggest that the party is over (for many domestic ports), much is still happening in Baltimore that portends even greater cargo volumes – of all types. None of that happened by accident. Nevertheless, and with no shortage of happy port stories emanating from sea to shining sea, it takes an unusual set of circumstances to project even more excitement in any one location. Baltimore’s story is one such place. Diversification – and careful planning – is what fuels that engine.

Breakbulk: location, location and … location
Not everything fits into a 40-foot steel box. Hence, and in a business where flashy container numbers often dominate the conversation, breakbulk operations also constitute an important and interesting slice of that general cargo pie. Baltimore owns a big part of it. That’s because the Port’s location and proximity to states such as Pennsylvania, West Virginia, and Ohio allow it to be an ideal port for handling cargo destined to those states. In the hinterlands, the demand for breakbulk, special project cargoes is still robust.

The power generation markets, as well as the auto press projects going to Detroit, are all handled at POB. Recently, an ongoing export business of nuclear casts weighing up to 300,000 pounds with accessory crates weighing up to 80,000 pounds came through the Port of Baltimore destined for Russia, South Africa, and the UK. According to Richard Scher, Director of Communications, MDOT Maryland Port Administration, at the Port of Baltimore, “The public terminals have made significant inroads in recent years with other breakbulk cargos, including wind turbines, transformers, locomotives, refinery and energy production equipment.” He continued, “Two heavy lift cranes and enhanced on-dock rail capabilities allow direct discharge on and off a ship. Dundalk Marine Terminal sports three heavy lift pads with a capacity of 32.5 tons per axle per pad which helps the Port with heavier loads.”

Baltimore: anything but boxed in
In 2018, the Port of Baltimore (POB) experienced a record year in foreign cargo tons. Import and export tons totaled nearly 43 million tons, surpassing the previous mark set in 1974. Headlining that growth was twelve months of simply huge container growth, with the Port surpassing one million TEU’s for the first time ever. As impressive as that growth might be, it is also likely that the port hasn’t even scratched the surface of where it could be, five years from now.

Not one, but three different infrastructure advantages, one involving natural circumstances and the other, coming improvements, could propel that growth even further. First, Baltimore is one of the only East Coast ports with the necessary water depth and infrastructure that’s able to accommodate the today’s supersized post-panamax boxships. Beyond this, and perhaps just as important, the Maryland Department of Transportation Maryland Port Administration (MDOT MPA) will soon receive $6.6 million in U.S. Department of Transportation grant funding to contribute to a project that will deepen a second container berth to 50 feet at the Port of Baltimore’s Seagirt Marine Terminal. Beyond this, and importantly, the state of Maryland will contribute $7.8 million and Ports America Chesapeake, which operates the Seagirt Marine Terminal for the MDOT MPA, will add $18.4 million for a total project cost of $32.7 million. That’s the quintessential definition of a so-called P3 – public-private – partnership.

Richard Scher explains, “We have an outstanding relationship with Ports American Chesapeake, our private partner at our Seagirt Terminal.” He continued, “It is a true partnership. We communicate every day, Travel and work closely together to market and promote container business through The Port of Baltimore.” Importantly, Ports America constructed the deep berth, paid for the supersized ZPMC cranes and will do the same for the new 50-Foot berth. “We look forward to many successful years working with them,” he added.

Last but certainly not least, it has been said many times by many port executives that access to a class 1 rail system is key to any big port’s growth plans, especially as the nation’s highways become more and more congested. The ability to ship and receive boxes from the hinterlands, eschewing the long highway route for the short, so-called ‘last mile’ delivery, also speaks to a port’s commitment to a greener environmental signature – inside and outside its gates. If so, then Big Baltimore has that box checked, as well.

Today, The Port of Baltimore offers access to not one, but two Class One ‘on-dock’ railroads; namely, CSX AND NS. Scher adds enthusiastically, “They are key partners of ours. Also, we will be adjusting Baltimore’s Howard Street Tunnel, NEL, which is owned by CSX, to handle double stacked container trains. That will make us more competitive with New York and Virginia on the container side on the freight equation.”

Rolling Along with RO/RO
The Port of Baltimore handled over 850,000 auto units in 2018 (another record). Indeed, among the nation’s ports, the Port of Baltimore ranks first for autos and light trucks, roll on/roll off heavy farm and construction machinery – for eight consecutive years. Naturally, The Port of Baltimore hopes to continue that momentum. It turns out that, once again, location plays a major part in that enviable metric. For starters, says POB’s Scher, “The Port of Baltimore is further inland than any other East Coast Port. That puts us closer to the Midwestern markets and associated manufacturing facilities than other ports.” It starts with locality, then, but it doesn’t end there.

The port also offers four on-dock auto processors, all of which provide a number of good choices for automakers. “The Port of Baltimore has a unique quality program unmatched by any other port,” insists Scher, who explains further, “This includes monthly meetings with all the key players in the auto supply chain to discuss current performance and best practices.”

Acknowledging Today’s Success, Planning for Tomorrow’s Changes
When it comes to the Port of Baltimore, local port executives can point to any number of cargo modes and types as ample proof of the port’s national and global competitive positions. Among those cargoes, the Port ranks second in the nation in terms of exported coal. The value of foreign cargo that the POB handled was $59.7 billion. Moreover, Coal and LNG exports were the primary reason for the ports overall increase in tons. Last year, coal exports continue to set records with over 21.5 million tons exported in 2018, the same year that also brought the first LNG exports through the Port.

The news comes with caveats, however. A more friendly federal position on the use of coal as well as several external variables (foreign casualties, logistics) drove some of those gains. But, Baltimore can’t rely on coal forever. Inland barge operators know this and are actively positioning themselves for the future, weaning themselves from a dependence on a commodity that, eventually, intense pressure from the environmental lobbies and political arenas will exact its toll.

To be fair, the state-owned public marine terminals here don’t handle coal for the Port of Baltimore, hence POB declined comment on that situation. Nevertheless, coal remains a big part of the port’s business mix, if only for a limited – as yet defined – period into the future. If and when that drop-off comes, however, POB will be ready.

The nation’s 11th largest port in terms of foreign cargo tonnage and 9th largest in terms of dollar value hasn’t been sitting on its hands; nor did it arrive in its enviable perch by accident. Richard Scher explained, “Our success stems from a strategic plan that we have been following for more than 20 years. That plans recommends a diverse cargo approach.” He continued, “Many other ports are container heavy, which means during challenging economic times, those ports have seen their container business drop by 40 percent, or more. By concentrating our efforts on not just containers, but also cars, heavy machinery, forest products and breakbulk, we are better able to absorb harder hits against one particular commodity. We are very happy with how we are trending.”

Looming Large in the Center Porthole
If yesterday’s homer runs don’t win today’s ballgames, then a look back at the Port of Baltimore’s state-owned marine terminal’s record for its Best Fiscal Year (July 2017-June 2018) for general cargo tons and most TEU’s in a single month (90,152, May 2018) are nice memories, but in now way a guarantee of future performance. Nevertheless, and despite the looming rain clouds of a (possibly) slowing economy and the specter of a full-blown trade war between the United States and China, POB’s cargo numbers are up from the record plateaus of 2018. “General cargo is up two percent, containers, are up six percent and cars are up six percent last year’s record totals,” said Scher.

Knocking on the door to the coveted Top Ten list, this diverse port already boasts leadership in more than one sector. But, Baltimore’s real strength resides in its multi-modal, diverse cargo base. Containers, bulk, breakbulk, RO/RO and a fair tanker trade spanning petroleum and LNG, that’s an enviable spread. Common sense says that even modest growth across all modes would propel the port to the next level. Deeper, wider, diverse and growing, Baltimore’s future is limited only by the imagination of its principals, cargo stakeholders and the supply chain itself. That’s big. That’s Big Baltimore. 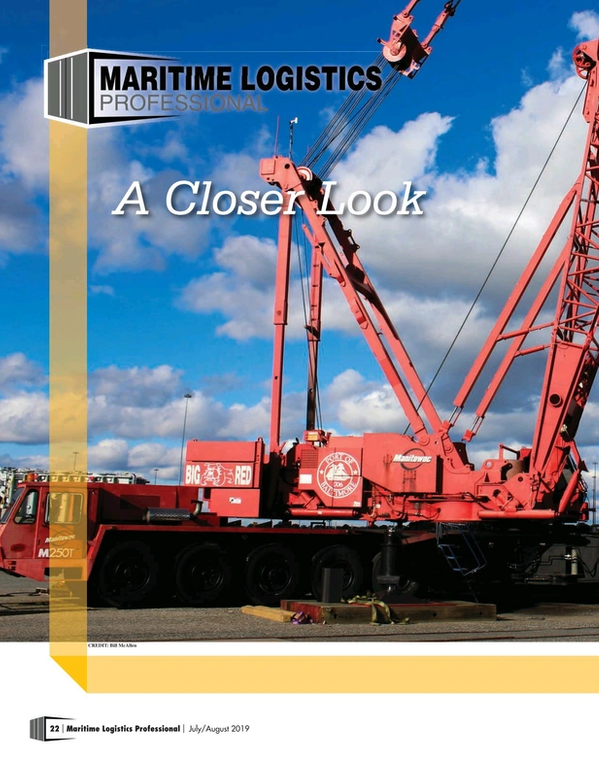