Sealift is essential both to executing this country's forward defense strategy and to maintaining a wartime economy. The United States' national sealift objective is to ensure that sufficient military and civil maritime resources will be available to meet defense deployment, and essential economic requirements in support of the U.S. national security strategy. The broad purpose of the sealift policy is to ensure that the U.S. maintains the capability to meet Sealift requirements in the event of the crisis of war. Congress has provided strong support for a sealift program and over the last two years has made over $1.3 billion available for the acquisition of sealift vessels. Sources within the Department of Defense have indicated plans for additional funding for a five-year program.

National Security Sealift Policy The President has approved the following Sealift policy guidelines: First, the U.S.-owned commercial ocean carrier industry, to the extent it is capable, will be relied upon to provide Sealift in peace, crisis and war. This capability will be augmented during crisis and war by reserve fleets comprised of ships with national defense features that are not available in sufficient numbers or types in the active U.S.- owned commercial industry. The Department of Transportation is responsible for determining whether adequate manpower is available to support the operation of reserve ships during a crisis. In peacetime, the Department of Defense will operate the minimum number of sealift ships, including reserve ships to meet the Joint Chiefs of Staff exercise requirements and shipping requirements that cannot be accommodated by U.S.-flag commercial ocean carriers.

Second, we must be prepared to respond unilaterally to security threats in geographic areas not covered by alliance commitments. Sufficient U.S.-owned sealift resources must be available to meet requirements for such unilateral response.

Third, in addition to the U.S.-flag fleet, we will continue to rely on U.S.-owned and allied shipping resources to meet strategic commitments to our established alliances.

The Department of Transportation is responsible for ensuring that the appropriate legal and procedural mechanisms for exerting effective control over "effective U.S. control" ships are in place. The Department of Transportation shall also continue to seek commitment of sealift resources from NATO allies to meet alliance requirements. The Departments of State and Defense shall examine the extent to which agreements with other maritime nations should be negotiated to provide additional sealift.

Fifth, the Departments of State and Transportation, the Special Trade Representative, and other appropriate agencies shall ensure that international agreements and federal policies governing use of foreign flag carriers protect our national security interests and do not place U.S. industry at an unfair competitive disadvantage in world markets. During peacetime, federal agencies shall promote, through efficient application of laws and regulations, the readiness of the U.S.

Government policies and programs shall provide for an environment which fosters the competitiveness and industrial preparedness of all industries including the maritime industry.

Finally, development and implementation of specific sealift and supporting programs will be made with full consideration of the costs and benefits involved. New programs to enhance our ability to meet national security sealift requirements shall compete for resources with other national security programs.

The Iraqi invasion of Kuwait created an urgency previously absent from sealift construction. Suddenly sealift has become a high priority program. As a result, construction of sealift ships represents one of the best business opportunities available to the U.S. maritime industry.

Mideast Crises Create Impetus For Sealift It's ironic that two Mideast oil producing countries created the impetus for building sealift ships—on two separate occasions over the past 10 years. Iran created the first impetus, when it seized the U.S. embassy in Teheran and held Americans hostage during late 1979 to 1981.

Iraq provided the second impetus when it invaded Kuwait and created a military stand-off between Iraqi and U.S. forces which has yet to be resolved as of press time. In both cases military planners found lack of adequate sealift to be a serious deficiency.

When Iran took Americans hostage, military planners in this country found a serious shortage of capability to field and support military equipment in the Persian Gulf.

While it was possible to get troops to the area quickly by transport aircraft, it was not possible to quickly field tanks, guns, equipment and supplies to support military operations.

This serious shortage gained much attention in the Pentagon during the final months of the Carter Administration and initial years of the Reagan Administration.

Period Between Mideast Hostilities Settlement of the Iranian hostage crisis took the pressure off strategic sealift requirements. The Navy and other DOD planners retreated to a series of studies which examined sealift requirements from every possible point of view. These studies substituted for action.

Iraq Invasion Changes Picture Iraq's invasion of Kuwait created a flurry of concern about sealift capability. As in the Iranian hostage crisis, sealift suddenly became a priority interest to the military. As a result, Congress injected $900 million in the FY 1991 budget for sealift ship construction—and told DOD to get on with the program.

House Appropriation Committee Directions In the October 9, 1990 report accompanying the House defense appropriations bill, the House Appropriations Committee expressed its desire to get on with a new sealift program: ". . . The Committee directs the Navy to immediately develop an acquisition plan to build new Roll On/ Roll Off type ships to transport one additional heavy Army division.

The Committee notes that the speed of these ships need not be equal to the speed of current SL-7 ships, but in other respects should resemble the existing SL-7 ships.

The Committee expects that the ships would be maintained, manned and exercised as is the case with the SL-7 ships. The design should also focus on commercial rather than military standards in order to control cost. The Navy is to provide a report on this aspect of the program by March 1, 1991 and to begin contracting the program 30 days after submitting the report." Senate Appropriations Committee Directions The Senate Appropriations Committee also addressed the sealift issue in the October 11, 1990 report accompanying the Senate defense appropriations bill: "The Committee believes the Defense Department should use the funds provided for the construction of ships for Maritime Prepositioning (MPS) for Army equipment. It is understood that the funding recommended would be sufficient to provide for at least one additional squadron of MPS ships. Considering that the MPS ships demonstrated their utility in the recent operation, the Committee believes additional ships of this type could provide a much needed capability to deploy equipment rapidly. Furthermore, as equipment is withdrawn from overseas locations, the Committee believes the military departments should examine storing this equipment on prepositioned ships instead of retiring or otherwise disposing of it." FY 1991 Defense Authorization Bill In authorizing a new fast sealift program, the Congress gave loose guidelines to the Navy and required a detailed report be prepared within six months describing how the program will be implemented: "The Conferees agree to establish a fast sealift program for the construction and operation of cargo vessels that incorporate features essential for military use of the vessels.

The Secretary of the Navy would be responsible for the design and construction of the vessels after consultation with the Administrator of the Maritime Administration.

The Conferees agree not to recommend a particular design for ships built under the program.

Scene Is Set Congress has authorized a new sealift ship program and has provided funds for this purpose. All that's required is for DOD to get on with the activity. A flurry of activity is now taking place in DOD, Navy and Army to determine the size and composition of future sealift spending.

Two Prong Approach Likely As shown in the accompanying exhibit, Navy planners have divided sealift activities into near and mid/ long term programs. The near term program deals with satisfying the current sealift deficiency by acquiring new ships which are within the state-of-the-art. The mid/long term program seeks to develop new designs and technology which improve strategic sealift mobility.

IMA has just published an indepth assessment of this new sealift program. The report analyzes options being considered, acquisition planning, likely contracting rules, business situation of likely competitors and identifies points of program responsibility. Over the next 12 months, IMA will update the report with advisory memos as the sealift program matures into ship construction contracts.

The price includes the initial report plus 12 months of advisory memos. 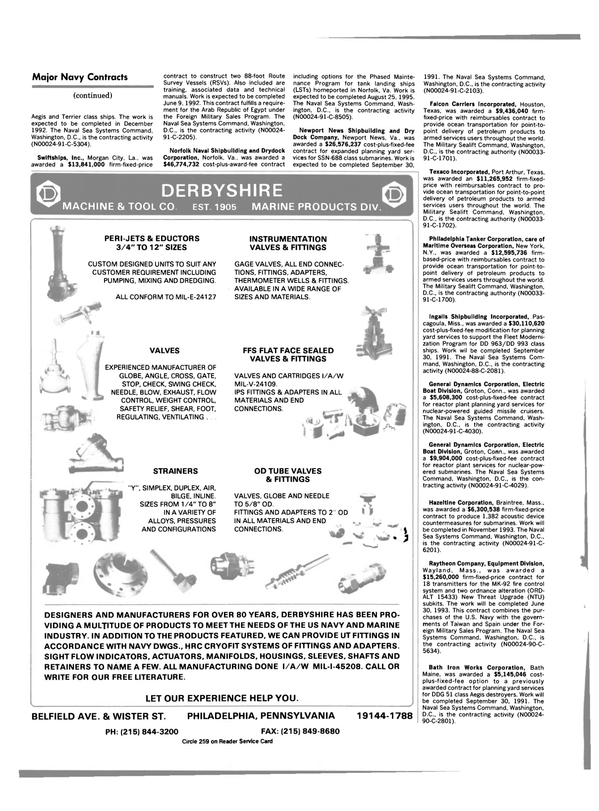