Traditionally, tugs and towboats (hereinafter tugs) have largely been uninspected vessels of the United States. They were subject to basic examinations by the U.S. Coast Guard, but the standards were little higher than those applicable to recreational craft. These tugs were also subject to examination by the Occupational Safety and Health Administration (OSHA). The OSHA examinations were rare, but when they took place any violations found could be costly. After one of the OSHA penalty cases was litigated all the way to the U.S. Supreme Court, the industry decided that it was time for a change.

With the support of the U.S. Coast Guard, the tug industry approached Congress and requested that its vessels be treated as inspected vessels of the United States. As such, OSHA would have no jurisdiction. Execution of the plan took longer than expected, but the day is fast approaching. Tugs have become accustomed to operating almost anywhere and performing a wide variety of missions. Prevented only from carrying cargo, their major regulatory restrictions involved safety standards and the qualifications of master.

Certificate of Inspection
Inspected vessels have significantly more restrictions on their operation than do uninspected vessels. The vessel’s Certificate of Inspection (COI) identifies the waters within which it is authorized to operate. If limited to coastwise waters, the vessel may not transit more than 20 miles offshore. If limited to lakes, bays, and sounds, it must remain within the boundary lines, which generally follow the U.S. coastline. The COI may also indicate the sea state within which the vessel may operate.

The COI also identifies the service or services in which the vessel is authorized to engage. A vessel that is authorized to engage only in carriage of freight may not routinely hire itself out for carriage of passengers, oceanographic research, or spill response. To qualify for such activities to be listed on the COI, the vessel must show that it is appropriately equipped to conduct these operations.

In addition, if an activity for which the inspected vessel intends to engage requires carriage of personnel in addition to the regular crew, this carriage of additional personnel must be reflected in the COI.

Vessel Response Plan
Most commercial vessels operating in U.S. waters are required to have a Coast Guard-approved vessel response plan (VRP). The VRP addresses the actions to be taken in the event of an oil spill. It must identify the outside resources that it has retained by contract or other approved means to respond to the maximum extent practicable to a discharge, including a discharge resulting from fire or explosion. Tank vessels that transfer oil within waters subject to the jurisdiction of the United States (out to the limit of the exclusive economic zone, generally 200 nm) must have a VRP addressing those waters. Other covered vessels must have a VRP providing coverage out to 50 nm off the coast.

VRP holders and developers must carefully examine their plans to ensure that the resources listed therein are actually authorized to respond when called. VRPs listing outside resources that are not authorized to provide the listed service may be invalid and subject to disapproval. As a result, the vessel may find that it is no longer allowed to operate in U.S. waters.

Generally
As mentioned previously, tugs have become accustomed to providing a number of services. As they become inspected vessels, it behooves their owners and operators to determine what services in addition to towing they anticipate that the tugs will or could be engaged. The owners and operators must then work with the Coast Guard to ensure that the tugs meet the applicable requirements and have the service reflected on the COI. They should also work with their insurers and other involved third parties to ensure that everyone is on the same page. 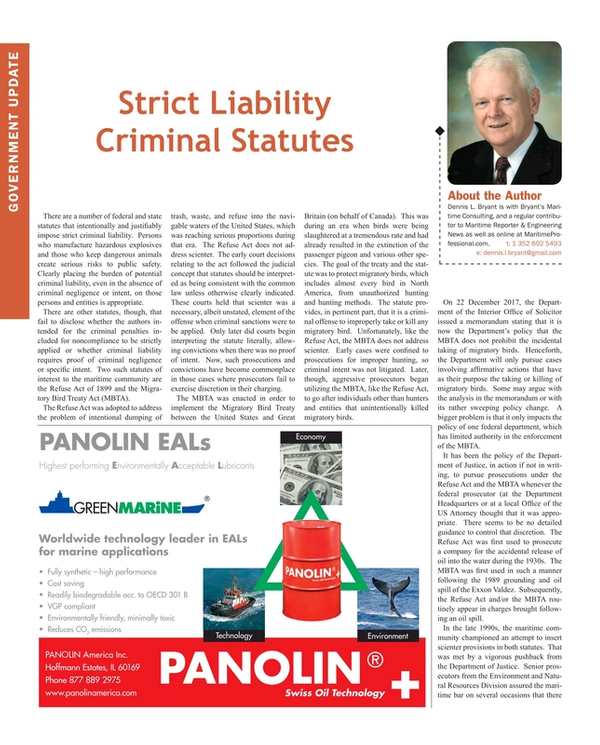