Outgoing Secretary of Transportation for the Commonwealth of Virginia

Until January of this year, Sean Connaughton oversaw seven state agencies with more than 9,700 employees and combined annual budgets of $5 billion. Connaughton is probably better known to MarineNews readers as the U.S. Department of Transportation’s Maritime Administrator during the second Bush Administration. As U.S. Maritime Administrator, he was responsible for the daily management of that agency and its promotional programs for the marine transportation industry. This included advising and assisting the Secretary of Transportation on commercial maritime matters, operation of over 50 ships in the Ready Reserve Force, supervision of the U.S. Merchant Marine Academy, oversight of the six State Maritime Academies, and administration of various shipyard and cargo programs. Along the way, he also served as Corporate Vice President, Government Affairs for the American Bureau of Shipping. Connaughton is a graduate of the U.S. Merchant Marine Academy and served the U.S. Coast Guard as both a commissioned officer and as a civil servant in the Office of Marine Safety, Security, and Environmental Protection. After gaining a Master’s degree from Georgetown University, he joined the American Petroleum Institute, representing companies involved in the energy and marine transportation industries, during which time he also earned a law degree from George Mason University. His many honors include the 2009 Vincent T. Hirsh Maritime Award for Outstanding Leadership by the Navy League of the United States and an honorary doctorate in Public Administration from the Massachusetts Maritime Academy. As his tenure ended in the Commonwealth of Virginia, we caught up with him and sought his reflections on not only the past four years, but also his take on the collective domestic waterfront. Arguably, there are few marine professionals better equipped to give that “SITREP.”

As you end your four-year tenure as Secretary of Transportation for the Commonwealth of Virginia, let’s look back at the highlights of that time, especially from the standpoint of intermodal progress and the waterfront. What are the biggest ‘take-aways’ for you after your experience in Virginia? What could Washington learn from Virginia?
Transportation is a tough business at the state level; it is literally where the rubber hits the road.  You face competing interests, politics, limited resources and the ever present federal bureaucracy. However, you can get a lot done if you stay focused and find ways around the roadblocks. We have done that in Virginia over the past four years and our program is now regarded as one of the best in the nation. The biggest disappointment has been the federal role. Four years ago, the federal highway transfer was about one-fourth of the state’s transportation funding, now it’s one fifth and in just three years from now it will be one-sixth. That drop will be even more dramatic if Washington does not address its funding problem, as we did in Virginia. In addition to funding concerns, onerous federal rules and regulations hinder sound transportation planning and discourage transportation investment.  Incredibly, it seems that the federal constraints are increasing at the same time that their financial commitment going down. It is hurting jobs, the economy, and American competitiveness.  Something has to change.

What was your proudest moment in Richmond?
I have had a great tenure as Secretary and can point to much that we accomplished, but the proudest moment was the passage last year of the first comprehensive transportation funding legislation in 27 years. The need for more funding for transportation has been recognized in Virginia for a long time but getting it actually done has been a goal for the last four Governors. As passed, the legislation provides billions more every year for all modes of transportation as well as moving Virginia away from reliance on the declining gas tax. The legislation came after a herculean effort by our Administration that included years of trying every idea and trick to advance transportation projects, including public private partnerships, bond sales, administrative audits, reducing personnel and promoting sponsorships. Virginia’s legislation is precedent setting and considered a model for other states and the federal government.

One aspect of what sets you apart from other maritime professionals – in our mind – is your attention to the entire intermodal equation and not just the waterfront itself. They all come together. Talk about the development of your inland ‘ports’ and FTZ areas at, for example, Front Royal, Richmond and other places.
As Secretary, I oversaw Virginia’s road, rail, transit, aviation, maritime, motor vehicle regulation, and commercial space programs. It is interesting that some people were puzzled when a perceived “maritime guy” was appointed to a job dominated by road and transit challenges. Virginia not only has a major seaport, but approximately one third of its economy and jobs are in sectors dependent on a well-functioning transportation system, such as agriculture, mining, logistics and manufacturing. We look for ways to make transportation investments that stimulate economic growth. The Virginia Inland Port, which connects the Shenandoah Valley to the Port of Virginia via rail, has created thousands of jobs and billions of investment in the areas surrounding it. We look to replicate that success at the Port of Richmond with the I-64 barge service. We have also funded another inland port in southwest Virginia as well. We have developed a freight transportation plan that looks at how we can invest in order to move freight via road, rails, water, and air more efficiently. And, we are using that plan to make investments that relieve congestion as well as improve Virginia’s competitiveness.

Sum up the state of the I-64 barge express on the James River between Hampton Roads and Richmond. How many trucks have you taken off the road? Is the concept picking up steam – and more importantly, cargo volume?
The service has been a success. We invested in the I-64 barge service with the intention of keeping trucks off I-64. One of the biggest traffic problems we have in Southeastern Virginia is the congestion on I-64, which is the primary highway route connecting the Hampton Roads region to the rest of the state. The interstate itself, and specifically the two bridge tunnels on this interstate, are reaching capacity. Even though rail movements are important to our port, two-thirds of the containers it handles continue to move by truck. Virginia has committed billions to expand its port and improving the supporting highway system, but more needs to be done. The number of marine containers moved by barge is now around 5% and we intend to keep growing that volume. We are also interested in partnering with other ports to initiate services that can keep trucks off of I-95 as well.

You’ve advocated for the waterfront on a national and state level for many years. What’s the state of America’s maritime industry as we launch into 2014? We are in the midst of as robust a ship / boatbuilding boom as the nation has arguably seen in four decades. It’s all good; some of it fueled by the shale boom and the rest, a revived offshore production environment. What can we do to keep it going beyond the usual cyclical up s and downs?
The normal cycle of the U.S. maritime industry seems to be one in which one sector booms while others bust. The problem is that these cycles hide a continual state of decline. The maritime industry is critical to the American economy and national defense and the nation needs to develop and implement a national strategy that improves its health and competitiveness. The federal government seems to have little trouble “saving” industries such as banking and auto manufacturing, so there are few valid arguments why it cannot turn its attention to the maritime industry. Given the growth in global trade and the need for domestic transportation alternatives along with great job opportunities, the maritime industry is the type of cutting edge 21st Century industry that the United States needs to play a significant role. The challenge is getting the Washington to wake up before it is too late.

Sum up what our national transportation strategy should be in the come year. Five years? Ten?
The nation’s current transportation “strategy” seems to be about convenience, not competitiveness.  People forget that the federal government was originally formed to address interstate and foreign commerce challenges and some of the first federal programs dealt with transportation, such as lighthouses and shipping. Today, the focus is mostly on urban mobility and, as a result, the federal program has become mired in local minutia instead of the global transportation and economic needs of the nation. The federal government should step back from its current micromanaging of transportation, focus on freight and the projects that enhance economic growth, give States and localities greater flexibility in allocating funds, eliminate the red tape that adds little beyond time and expense to the process, and develop a national gateway and investment plan.

Wind Power: 2014 brings us seemingly closer than ever to this so-far unrealized maritime, offshore industry here in the United States. Virginia is in the mix, as well as Massachusetts, Rhode Island and others. Where does it look most likely to finally happen – and more importantly why or why not?
The challenge offshore wind energy faces today is the same challenge we seem to face in every sector of infrastructure: federal rhetoric versus reality. Washington policymakers publicly state their support for renewable and alternative energy but at the same time they have done little to address the regulatory and legal hurdles that have stalled these projects. Offshore wind energy is good for both maritime jobs and diversifying America’s energy future. However, this industry will not reach its full potential until the federal government can assure project developers that their investment will actually result in wind farm construction and operation.

After high profile tenures as U.S. Maritime Administrator and Secretary of Transportation for the Commonwealth, what’s next for Sean Connaughton?
I have not decided yet. I have had a great run over the past 15 years in leadership positions at the local, state and federal levels of government, but it is definitely time to return to the private sector. I will be making a final decision in the coming weeks. 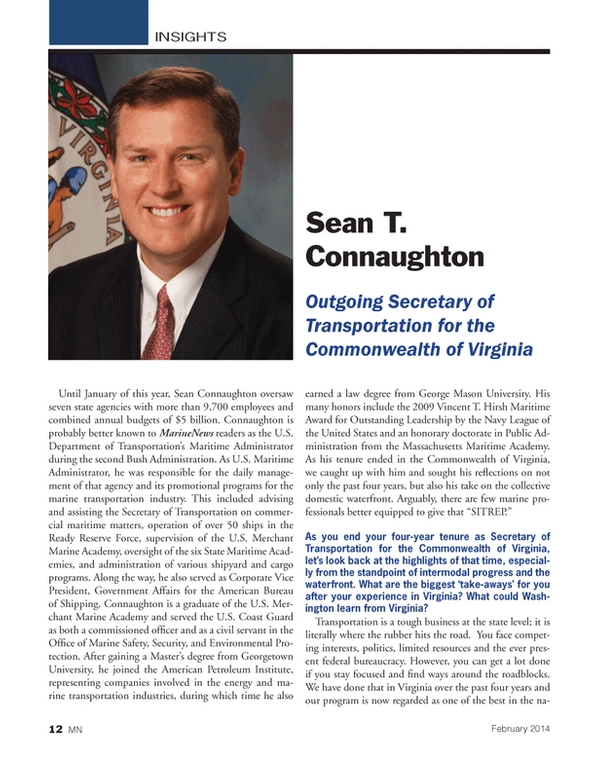